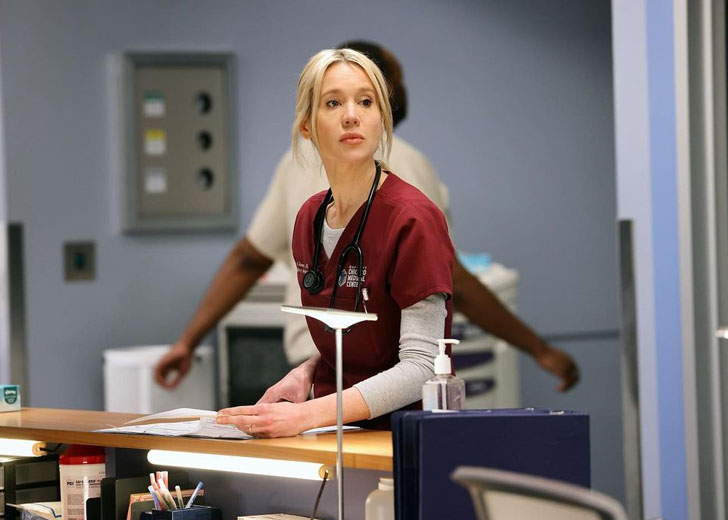 “She is a character that has the potential to return,” says ‘Chicago Med’ EP Diane Frolov.

Hager had joined the NBC medical drama in the currently running seventh season as a series regular. Her character of Dr. Hammer first appeared in the first episode, ‘You Can’t Always Trust What You See,’ which aired on September 22, 2021.

While she was a part of the show, her character sparked a potential romance with Dr. Will Halstead – portrayed by actor Nick Gehlfuss.

Her character’s last appearance on Chicago Med appeared in the 14th episode of the seventh season titled ‘All the Things That Could Have Been.’ The episode premiered on NBC on March 2, 2022.

During the 14th episode, Dr. Hammer was seen reconciling her relationship with her bipolar mother. After that, she decided to return to Michigan so that she could give another shot to her marriage with her estranged husband.

While Hager’s Dr. Hammer is leaving the show, it was recently announced that actor Steven Weber’s Dr. Dean Archer would return in the next season. Additionally, Jessy Schram has returned after her character, Dr. Hannah Asher, struggled with drug addiction and became two years clean.

After Hager’s departure from Chicago Med was announced by Deadline, some fans took to the news’s comment section to express their views. One wrote, “Great actress I hope she returns.”

“I liked her a lot. She was a bright spot in the cast. There is no reason why she should have been cut,” another added.

One fan had a different view as they wrote, “She was fine, but, it was hard to become invested in her character. It felt like she’d just arrived, and we didn’t really know her.”

Although Hager’s Dr. Hammer has left the NBC show in the mid-season, she might make her return in the near future.

In a joint statement, executive producers Andrew Schneider and Diane Frolov told TVLine, “Her story arc with her mother ended. But we all really liked Kristen and would welcome her character coming back in the future.”

Similarly, Schneider said this in his interview with Variety, “She’s [Hager] a wonderful actor. We felt we had pretty much done her story regarding her mom and resolved that, but we’d love to have her back.”

“And the great thing about the ‘One Chicago’ series is if the character’s alive, the character can come back,” he added.

Similarly, Frolov said, “What’s happening with Stevie right now is she’s going back to try and reconnect with her husband and make that work. So we’re leaving that up in the air. Does that in fact happen? She is a character that has the potential to return.”

These statements from the executive producers really give hope that Hager might return soon.

As of now, it remains unknown why Hager is leaving Chicago Med. The American actress is yet to comment on this news.

On the other hand, she is currently expecting her first child with her husband, Matt Jones. She announced her pregnancy via Instagram on March 16, 2022.

Hager and her husband shared the wedding vow amid the pandemic on December 21, 2020. Since then, they have been relishing their marital life days.

Besides Chicago Med, she has appeared in movies and TV shows such as Beach Girls, Aliens vs. Predator: Requiem, Wanted, Wild Roses, Valemont, Being Human, The Kennedys After Camelot, Blood and Money, and Condor.

Chicago Med airs every Wednesday night at 8/7c only on NBC.