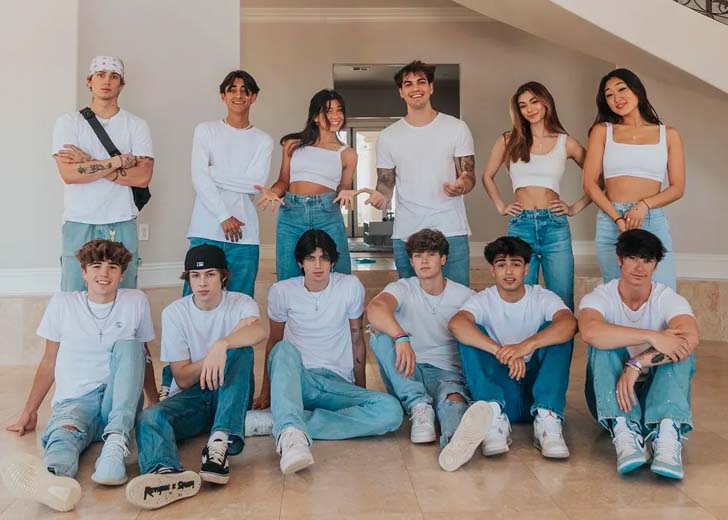 Meet all new members of the Hype House!

The Los Angeles-based TikToker’s house had added several new members to their team. And the existing ones were all hyped to welcome them.

On Thursday, June 2, 2022, the official Instagram handle of the Hype House posted a couple of pictures — both images were alike. The existing members were standing up in the photo whereas the new members were sitting on the floor.

The existing members were Thomas Petrou, Mia Hayward, Paige Taylor, Jake Hayward, Tabitha Swatosh, and Vinnie Hacker. As for the new ones, they had covered their faces with things like basketball, skateboard, Iron Man helmet, and Spider-Man mask.

The caption of the post suggested that the new members will be officially announced the next day at 12 PM. And as promised, on Friday, June 3, Hype House’s Instagram handle again posted those same pictures.

The old and new Hype House members pose together for a photoshoot (Photo: Instagram)

If we go from left to right on the picture Hype House posted, the first new member is Bryce Parker. And much like any other member of the Hype House, he is also a famed TikTok star.

As of now, he has garnered more than 2.3 million followers and 101.8 million likes on his TikTok handle. Similarly, he has a good fan following of over 367,000 on his Instagram handle.

Born on October 20, 2002, Parker is presently 19 years of age. He hails from Atlanta, Georgia, and his zodiac sign is Libra. His father’s name is Bryan and his mother’s name is undisclosed. Furthermore, he was previously in a relationship with Rachel Brockman.

The next one on the list is Jackson Dean. Born in 2003, he is presently 18 years of age. He celebrates his birthday every year on July 2, and his zodiac sign is Cancer.

The Los Angeles native has a healthy following of over 4.9 million on TikTok — he also has over 171.3 million likes. Additionally, he has gained more than 632,000 followers on his Instagram handle.

Jacob Day is another TikTok star to join the Hype House. He has garnered over 3.3 million followers and 149 million likes on his TikTok handle, and more than 484,000 followers on his Instagram handle.

Born in 2002, the Chicago, Illinois native celebrates his birthday every year on February 22. He is presently 20 years of age and his zodiac sign is Pisces. As for his family, it’s only known that he has three siblings: two sisters named Izzy and Gracie and a brother named Luke.

Ace Akers was previously a member of another content house named Breezy Boys before he joined the Hype House. The internet personality has over 394,000 followers on his Instagram handle and 3.2 million followers and 86.5 million likes on his TikTok handle.

Similarly, he has a self-titled YouTube channel that has accumulated more than 11,800 subscribers and 257,000 views. He started making videos for YouTube just three months ago.

Akers was born in 2002, making him 20 years of age now. He celebrates his birthday every year on February 12. Additionally, he hails from Nixa, Missouri, and his zodiac sign is Aquarius.

Eddie Preciadon is the fifth new member of the Hype House. The American social media star has garnered more than 1.5 million followers and 52.2 million likes on his TikTok handle. Additionally, he has over 203,000 followers on his Instagram handle.

Preciado was born in 2001 and raised in the suburbs of the United States. He celebrates his birthday every year on April 21. He is presently 21 years of age and his zodiac sign is Taurus. Furthermore, it’s reported that he has two younger siblings: a brother and a sister.

Kristian Ramey is the sixth and the last TikTok star who joined the Hype House. Among all six new members, he is one of the emerging ones with a slightly less number of followers.

As of this writing, he has accumulated 900,400 followers and 21.2 million likes on his TikTok handle. Coming over to his Instagram handle, he has 135,000 followers.

The Springfield, Missouri native TikTok star was born in 2002. He celebrates his birthday every year on July 12, making him 19 years of age now. Likewise, his zodiac sign is Cancer.