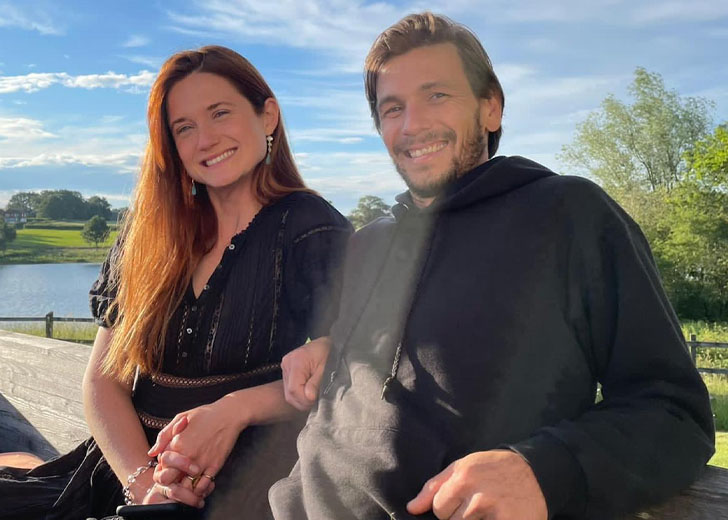 Congratulations to Bonnie Wright and her husband!

Bonnie Wright has found herself a husband!

On March 20, 2022, the Harry Potter alum took to her Instagram handle to reveal that she shared the wedding vows with her longtime boyfriend, Andrew Lococo.

She had shared a short clip in which she and her now-husband flaunted their new wedding rings – they had kept their hands just above a swimming pool. “Yesterday was the best day of my life. Thanks to my husband!!” she captioned her picture.

Several friends, co-stars, and well-wishers took to the comment section to shower their love for the newlyweds. One of them was fellow Harry Potter co-star Scarlett Hefner who wrote, “Congratulations to you both! @thisisbwright.”

“Sending you all the love and joy Bonnie, how exciting!” wrote The Witcher star Anna Shaffer. Her comment was followed by three Heart with Arrow emojis.

Similarly, one Instagram user commented, “Ah!! Congratulations!!!!!!!! So so happy and excited for you! Wish you so much love and a beautiful journey together!” The user had further inserted three red heart emojis in the middle and end.

Wright and her now-husband Andrew Lococo’s love story was first known to the public when she first introduced him via her Instagram handle. Initially, she only teased her relationship with Lococo by posting pictures of him – his face wasn’t visible.

Finally, on November 18, 2020, she revealed her then-boyfriend’s face and his first name – Andrew. It was the special occasion of Lococo’s birthday. Afterward, she began to flaunt more pictures with her beau.

However, she didn’t give much detail about her partner and their relationship as she prefers to keep her love life away from the media. Nonetheless, the actress’ love for her husband was evident through her Instagram posts.

Bonnie Wright and her husband Andrew Lococo at their wedding (Photo: Instagram)

On February 13, 2022, Wright revealed in her YouTube vlog that she and Lococo had moved in together. She said that she previously lived in Los Angeles and has left the place to settle down in San Diego, where her partner lives.

In the vlog, she said that she and Lococo had been going back and forth between Los Angeles and San Diego for a long time, so they moved in when they became ready to live in the same place.

The actress then showed her partner’s house – which is theirs now – where he has lived for ten years. She also showed the garden Lococo had beautifully managed and their pets: a dog named Billy and two cats named Frank and Hugo.

“One person who is so happy about being here is Billy. He is obsessed with Andrew, and every time he comes home from work, he’s still, like, as excited to greet him as though he hasn’t seen him in months and years. So, he can’t quite believe his luck that he gets to be by his two favorite people,” she added.

As of now, it remains unknown when and where the now-married couple first met each other. Likewise, it’s undisclosed if they were engaged or not before tying the knots. The details of Wright’s husband also remain unknown.

Before her wedding with Andrew, Wright was previously engaged to a fellow Harry Potter co-star Jamie Campbell Bower. They began dating in 2010 and got engaged in 2011. But, they announced their split the following year, in 2012. She was then linked to entrepreneur Simon Hammerstein and actor Jacob Artist.