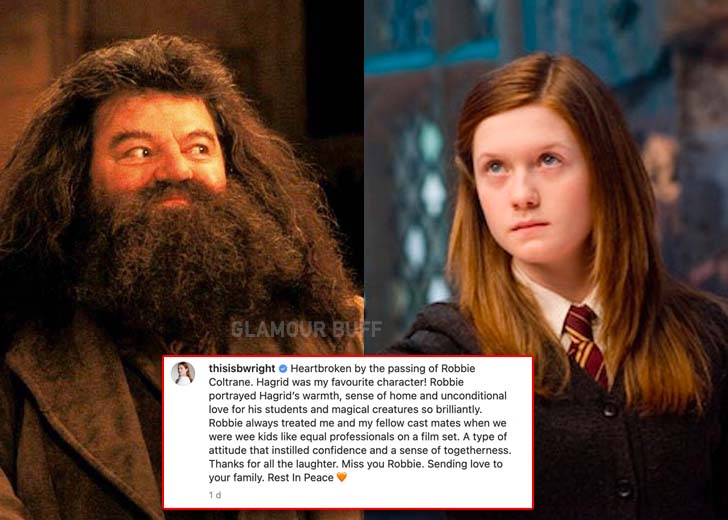 Bonnie Wright wrote, “Heartbroken by the passing of Robbie Coltrane.”

The fellow actress worked alongside him in the Harry Potter movie series, and Coltrane’s character as Rubeus Hagrid was one of her favorite characters.

After the Cracker actor’s death was announced on October 14, 2022, Wright took to her Instagram to pay tribute to her fellow co-actor.

She shared a picture of Coltrane on her Instagram and added a homage to him in her caption. She wrote, “Heartbroken by the passing of Robbie Coltrane. Hagrid was my favourite character!”

Wright added that Coltrane always treated her and the other cast members equally as adults on the set when they were young.

She ended her note by expressing her sympathy to his family and adding, “Sending love to your family. React In Peace.”

Coltrane, who portrayed the role of Hagrid in the Harry Potter movies, passed away at 72 after having been ill for over two years.

Thank you Robbie Coltrane for leaving us with Hagrid forever, you were a treasure.
RIP 🖤 pic.twitter.com/Lo1PbWnBpj

Along with the James Bond movies Goldeneye and The World Is Not Enough, he also acted in the ITV detective drama Cracker.

The actor passed away in a Forth Valley Royal Hospital close to Falkirk, Scotland, according to a statement from his agent Belinda Wright. However, the cause of death is yet to be disclosed.

The agent described him as a “unique talent,” and his portrayal of Hagrid had brought delight to children and adults alike all throughout the world.

After learning of Coltrane’s passing, the author posted a eulogy to the actor on Twitter. She shared a photo of them together along with a touching remark.

Many famous personalities, as well as fans around the world, also mourned the actor’s death. Harry Potter star Daniel Radcliffe said, “Robbie was one of the funniest people I’ve met and used to keep us laughing constantly as kids on that set.”

Fellow Harry Potter star Emma Watson via her Instagram story, said that Coltrane was deeply caring and compassionate towards her as a child and an adult. She wrote, “There was no better Hagrid. You made it a joy to be Hermoine.”

Robbie, who became one of the most recognizable actors from Scotland internationally, also had a significant impact on the Scottish branch of the industry.

Nicola Sturgeon, the first woman minister of Scotland, tweeted: “Very sad news. He had such range and depth as an actor, from brilliant comedy to hard-edged drama.” She also added that of all his roles, her favorite one was Fitz in Cracker.