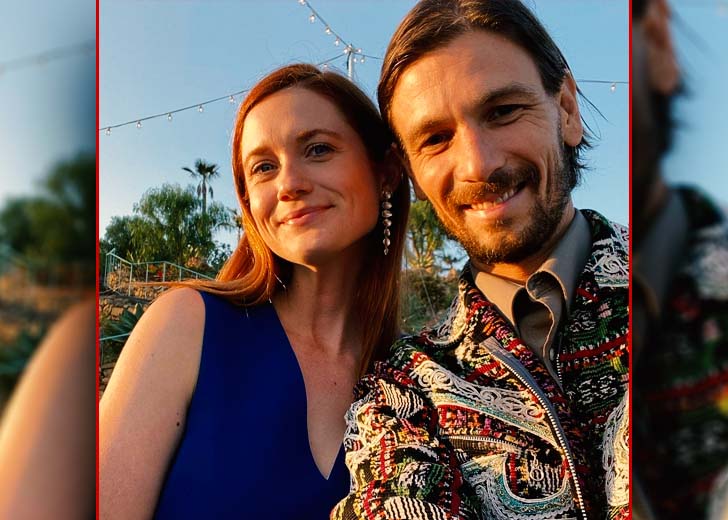 Bonnie Wright is a well-known English actress and director who gained the most limelight for her portrayal of Ginny Weasley in the Harry Potter film series. She is also among the cast members to appear at Harry Potter 20th Anniversary: Return to Hogwarts.

Coming over to her personal life, she has rather kept it private. But, on the other hand, she has also given some tidbits of information regarding with whom her partner is. As per the actress, her partner’s name is Andrew.

Read on as we discover more about their relationship!

Wright first introduced her partner, Andrew, on his birthday on November 18, 2020. She had posted a picture of him sitting behind their pet dog. “happy birthday Andrew,” she captioned her photo with two red hearts attached.

Before that, she had only hinted about her relationship and used to post those pictures of Andrew in which his face wasn’t visible.

Following that, the actress began to flaunt more and more pictures alongside her beau, and it became evident that they were a thing. For instance, on July 29, 2021, she posted a series of snaps from her London trip.

In those pictures, Andrew, as well as Wright’s family and friends, could also be seen. Going by that, it seems like she has introduced her partner to her family, and their bond seems strong.

In late September 2021, the couple had a lovely 48 hours in Baja, California. On November 17, 2021, Wright again took to her Instagram handle to wish her partner on the occasion of his birthday. She had shared two different pictures of him.

Similarly, her caption was even more special this time as she wrote, “happy birthday to my sun and moon. Love you so much!”

The actress’s last Instagram post of 2021 was also a picture with her partner. She had posted a selfie taken by Andrew and captioned it, saying that he made her year.

Is Bonnie Wright Married to Andrew?

As of this writing, it’s not confirmed if the Before I Sleep actress has shared the wedding vows with Andrew – and made him her husband. It’s also undisclosed if they are engaged or not.

Wright hasn’t talked about her relationship with Andrew publicly. Without her confirmation, it’s difficult to say if they are married or not.

She is private about her relationships and doesn’t open up on every occasion. If she hadn’t introduced Andrew by herself, then most of us wouldn’t even know if she was in a relationship or not.

To conclude, until there comes any marriage confirmation from the actress, it’s best to say that they are dating each other and are relishing the time they spend with each other.

Who Is Bonnie Wright’s Potential Husband?

Wright’s partner, Andrew, presently remains off everyone’s grid. No details regarding him are known or have been disclosed yet. His identity and profession remain known to Wright only, at least now.

While she might not be engaged or married now, Wright was previously engaged-to-be married to a fellow Harry Potter actor.

Wright was previously in a relationship with actor Jamie Campbell Bower, who played the role of Young Gellert Grindelwald in 2010’s Harry Potter and the Deathly Hallows: Part 1.

The former duo first met each other when the movie’s filming started in 2009. In February 2010, the actress confirmed her togetherness with Bower at the BAFTAs. She said, “Yes, we’re dating. We’ve been seeing each other for a few months, it’s good.”

Even after the confirmation, they kept their relationship low-key. On April 11, 2011, Bower revealed to The Daily that he got engaged to Wright. “I am engaged. I’m very happy. It’s a wonderful, wonderful time,” he told the outlet at that time.

It seemed like the two co-stars would indeed be tying the knots. However, as fate had it, it didn’t happen. On June 30, 2012, the engaged couple announced their split. A source at that time told DailyMail that their breakup was amicable.