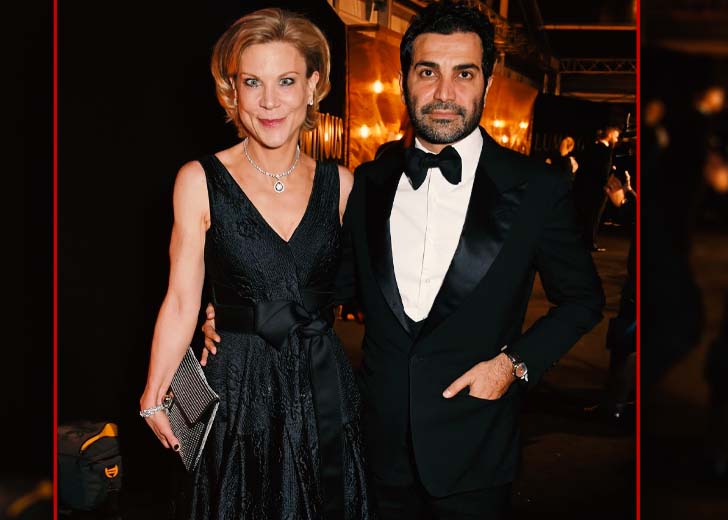 Amanda Staveley, whose full name is Amanda Louise Staveley, is an established English businesswoman who rose to fame after she led the takeover of the Premier League club, Newcastle United, in October 2021.

Following the successful takeover, she became a part of the Board of Directors as well as co-owner of the club. And as she co-owns a football club, several keen football fans have shown their interest in learning more about her marital life and her husband, Mehrdad Ghodoussi.

Who Is Amanda Staveley’s Husband?

Staveley’s life partner, Ghodoussi, is a businessman on his own as well as the managing partner of his wife’s company PCP Capital Partners LLP.

Talking more about his professions, he first worked as a senior sales specialist at a London-based company named Merrill Lynch. He served there from September 1997 to March 2003.

In September 2005, he joined Consensus Business Group as a director and worked there for almost three years. He left the position in August 2008. In September 2008, he was appointed as the director for a Dubai-based company named Deloitte Corporate Finance.

He served in the position till September 2009. After he left the company, he joined his present workplace, PCP Capital Partners LLP, as a managing partner at the same time.

In December 2011, he joined Dubai’s Deutsche Bank as its director but left the position in December 2013. Since then, he hasn’t joined any other company and has continued to serve in his position at PCP Capital Partners LLP.

Coming over to Ghodoussi’s other details, it’s reported that he was born in 1971 and initially raised in the suburbs of Iran. The 50-year-old businessman later immigrated to the United Kingdom. Presently, his family life and other details remain in the darkness.

As of this writing, it’s unknown when and where Staveley first met her future husband and if she met Ghodoussi before he joined her company as its managing partner in late 2009.

The now-married duo has also kept their dating relationship hidden from the public. After being in a relationship for a while, in October 2011, they shared the wedding vows in an intimate ceremony.

Their wedding ceremony was held at West Wycombe Park in Buckinghamshire and was witnessed by close friends and family members only.

Three years after they tied the knot, in 2014, Staveley and Ghodoussi became parents for the first time. They reportedly welcomed a daughter, whose details have been kept private by the duo.

Besides this, little to no details are known about their marital relationship. Both of them like to keep their personal life details up to themselves only, despite them being public figures.

In addition, both of their Instagram handles are set to private mode. As for their Twitter handle, there are only a few tweets available, that are mostly related to football.

Nonetheless, after the Newcastle United takeover happened in October 2021, the paparazzi first caught the married couple having a meal at Aveika restaurant, after which they joined their friends and entered the Livello Nightclub where they stayed until around 12:30 a.m. and returned to their hotel.

Furthermore, the duo is occasionally seen at the stands supporting the club they partially own. Going by that, it’s safe to say that Staveley and Ghodoussi’s relationship is going fine. Presently, it’s reported that the couple spent their time in Dubai and London, where they own properties.