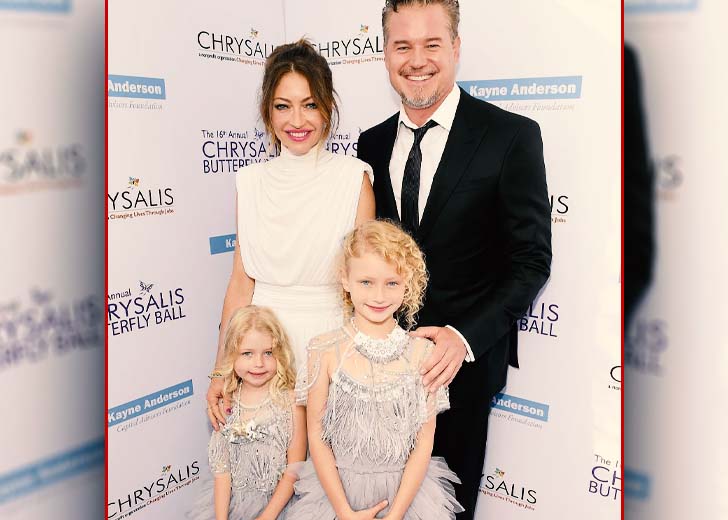 Eric Dane is an established American actor who is mostly known for portraying Dr. Mark Everett Sloan in the drama TV series Grey’s Anatomy (2006-22). In addition, he has appeared in Charmed, Marley & Me, Burlesque, and The Last Ship.

His recent movies and TV shows appearances include Euphoria and The Ravine. Soon, he will be appearing in the romantic drama movie Redeeming Love — releasing on January 21, 2022. In it, he will play the role of Duke.

Coming over to his personal life, Dane reportedly lives a single life even though he is still legally married to his estranged wife, Rebecca Gayheart. Read on to find out everything!

Dane and his actress wife had shared the wedding vows in 2004; however, after almost 14 years of their marriage — on Friday, February 16, 2018 — Gayheart filed for a divorce from the actor.

“Irreconcilable differences” were cited as the reason for the split. As per the court documents, the actress had asked for spousal support from her partner and joint legal and physical custody of their two daughters.

Dane had agreed to both of those terms. He and Gayheart had also released a joint statement in which they said, “After 14 years together we have decided that ending our marriage is the best decision for our family.”

“We will continue our friendship and work as a team to co-parent our two beautiful girls as they are the most important thing in the world to us. We kindly ask that you respect our privacy during this time as we navigate the next phase of our lives.”

Although the divorce was filed in early 2018, it is yet to be finalized. In June 2019, the court had issued a warning to the two saying that if they don’t move forward with the divorce, the court will dismiss it.

As per People, Supervising Judge Thomas Lewis said, “If you fail to take the appropriate steps in your case, the court may dismiss your case for delay in prosecution.”

And, as of this writing, there have been no further proceedings reported regarding Dane and Gayheart’s divorce finalization. That means that Dane and his estranged wife are still legally married.

Dane shared the wedding vows with his estranged wife on October 29, 2004, following a brief dating period of around a year.

Following their marriage, they settled down and held each other’s hands in several difficult moments. For instance, in 2009, an intimate video containing Dane, Gayheart, and another woman was released without anyone’s knowledge.

The video garnered negative attention; however, both tacked that obstacle. Similarly, in 2011, the actor admitted himself into rehab for his addiction to painkillers after suffering a sports injury.

Nonetheless, at that moment, too, Gayheart never left the sight of her partner. Dane had told People in 2014 that one of his biggest regrets is that he has got the person he loves the most wrapped up in all of his mistakes and problems, and that person is Gayheart.

He said, “We’ve all made mistakes. My one regret is that I got the person I love most wrapped up in all that: Rebecca.”

Dane and Gayheart’s marital relationship continued over the years, and the bond had made everyone think that they would remain together till the end. Sadly, it didn’t happen, as the actress filed for divorce on February 16, 2018.

Eric Dane and Rebecca Gayheart Continue to Co-Parent Their Kids

Dane and Gayheart first became parents on March 3, 2010, when they welcomed a daughter named Billie Beatrice Dane. Over a year later, on December 28, 2011, the actress gave birth to another daughter named Georgia Geraldine Dane.

When they filed for a divorce, the duo’s firstborn was 7-year-old and their second child was 6-year-old.

Following their split, they have continued to co-parent their children in every possible way they can. The family of four was even seen together to celebrate the 2020 New Year. Gayheart had even shared some of those pictures via her Instagram handle.

Furthermore, both of them have shared several pictures and clips of their daughters via their respective social media handles, in which they look happy and healthy.

For instance, on June 22, 2021, Dane shared a clip via Instagram in which his youngest daughter leaped off the stairs, and he caught her. “My youngest can fly. #girldad,” he captioned the post.

In the same clip, when his baby girl was about to do the same thing a second time, Dane seemingly calls the name “Rebecca.” It seems like his estranged wife was also in the house at that moment, attending a small family gathering or a party, as the environment of the place hinted.

Similarly, the two were also seen spending a day at the beach with their kids. Going by that, it looks like the now-estranged couple has been co-parenting their kids well and have maintained a friendly relationship with each other.

Posted on July 3, 2022July 3, 2022
The actress was dating Keean Johnson after her split with Robert Sheehan.
Read More