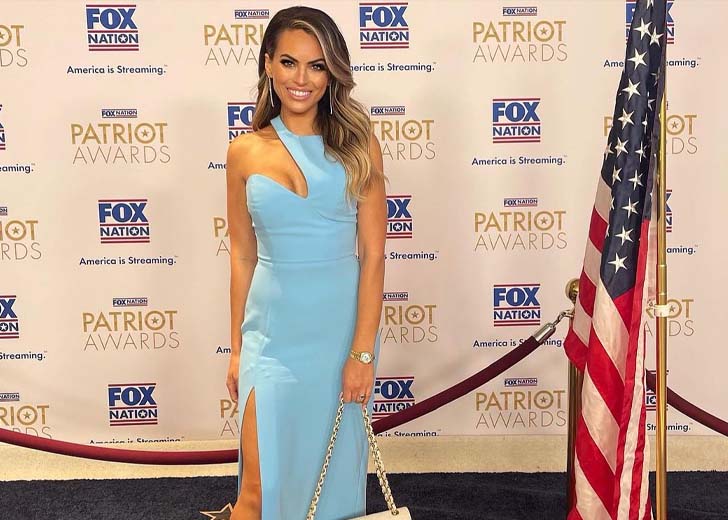 “We work so incredibly well together,” Kacie McDonnell on her relationship with her partner.

Kacie McDonnell has made a name by reporting different types of news for multiple companies. She is currently associated with Fox News as the full-time host of FOX Nation and as the host of “Mansion Global” on FOX Business.

And the person who reports the news is now the news, thanks to her pregnancy. That’s right! McDonnell is presently expecting her first child, a son, with her husband, Eric Hosmer.

The newscaster announced her pregnancy on April 5, 2022, by sharing a heartwarming video via her Instagram handle. At the end of the video, she also revealed her baby’s due date: September 2022.

Since then, the soon-to-be mother has been busy flaunting her baby bump. On Tuesday, April 26, McDonnell shared some more pictures via Instagram from her workplace at FOX Business Network, writing, “Baby boy’s national tv debut going swimmingly.”

In her pregnancy announcement post, McDonnell mentioned that she first met her future husband on the same day in 2015, when Hosmer, a professional baseball player, left a ticket for her to opening day.

They eventually started dating and have never separated since. While talking about their relationship with The Spun in November 2019, McDonnell said, “Any relationship has challenges. When you add 3000 miles between two people, you would think it would become even more difficult to maintain… not the case!”

“We work so incredibly well together. It also helps that we’re dating when we are. Technology bridges the gap and allows us to talk and “see” each other every day. I think the foundation of our relationship is built upon our unwavering support of the other following their dreams.”

As she went on, she mentioned that Hosmer had been one of her biggest cheerleaders [suppoter] for almost four years and vice versa. “We find happiness in each other as well as each other’s success. He’s THE BEST,” she added.

In the end, she said, “Communication is key in any relationship — but especially so when you’re loving long distance. We’ve pretty much mastered it. And if I’m being totally honest, going to visit him when it’s single-digit temperatures in New York is not a bad thing!”

Kacie McDonnell with her husband Eric Hosmer at their wedding (Photo: Instagram)

On October 26, 2020, the couple got engaged. Over a year later, on December 20, 2021, McDonnell announced via Instagram that she and her partner obtained their marriage license – meaning they legally got married.

Less than a month later, in January 2022, they held their wedding ceremony at The Breakers Palm Beach. McDonnell started using her husband’s last name on her social media handles following their marriage.

Who is Kacie McDonnell?

Born on July 30, 1990, McDonnell was raised by her parents in Pottsville, Pennsylvania. Her father’s name is Ken McDonnell, and her mother’s name is Michele McDonnell.

Apart from her parents, she has two siblings: a brother named Lochlan McDonnell and a sister named Isabelle McDonnell.

Coming over to her education, she started attending Nativity BVM High School in 2004 and graduated in 2008. After that, she enrolled at Villanova University in 2008 and graduated with a bachelor’s degree in Communication in 2012.

McDonnell started her career with a job as an On-Air Model at QVC in April 2009, a position which she left in August 2012. After that, she joined Fox 29 as a Traffic Reporter/Producer.

Similarly, she worked at Fox Television as an Eagles Pregame & Sideline Reporter from August 2013 to December 2013. In April 2014, she held another position at Fox 29 – as a Morning Anchor on Fox 29 Good Day Philadelphia.

McDonnell worked as a Pre/Postgame Host & Sideline Reporter for Sporting Kansas City from February 2015 to August 2016. From March to April 2016, she worked as a Courtside Reporter at the 2016 NCAA Men’s Final 4 & National Championship for Turner Sports.

In August 2016, she joined NESN as an anchor. While she still worked there, she once again worked at Turner Sports for around a month and covered the 2018 NCAA Men’s Final 4 & National Championship.

In August 2019, McDonnell left NESN and immediately joined Fox News as a full-time host for FOX Nation. Furthermore, in August 2021, she joined Fox Business Network as the host of “Mansion Global.” She presently holds both jobs.