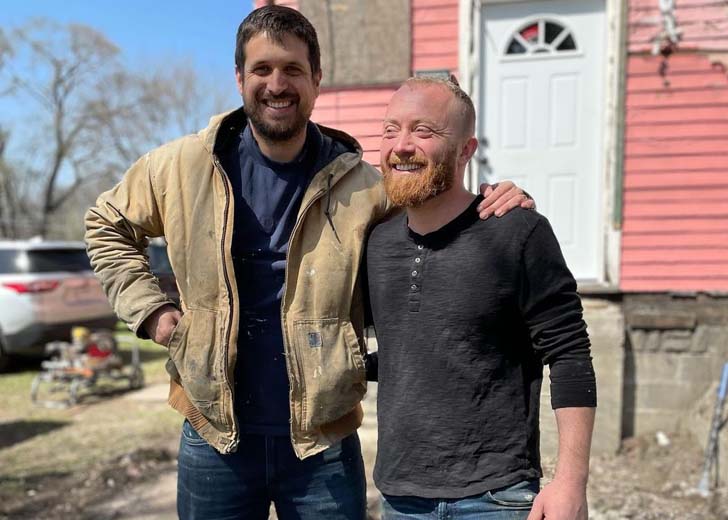 Love has no gender!

Builder and carpenter Evan Thomas, who stars alongside his partner, designer Keith Bynum, is responsible for successfully hosting and running the HGTV series Bargain Block.

Thomas and Bynum are lead hosts and design and renovation professionals who make various improvements to create a beautiful home in the show. They engage in new construction starter homes, which they later renovate into stunning homes with multiple designs for different people.

Bargain Block is about renovating different houses in different styles and techniques. HGTV has offered a fantastic experience for viewers by allowing them to see two people who love each other work on the same platform.

The fact that Thomas and Bynum work on projects in and around their Detroit home is a fascinating component of the series.

We’ve got you covered if you’re interested in knowing more about the pair and their professional career!

When did Keith Bynum and Evan Thomas first meet?

The adorable duo met in 2013 while both were living in Colorado, and they told Pride Source in April 2021 that they met for the first time on Match.com.

They dated for years while living there before moving to Detroit in April 2017. Bynum told the outlet, “Neither of us had ever been to Michigan before we moved here.”

He added, “Detroit kind of has, you know, a little bit of a reputation, and so when we moved here, we were a little scared. But almost immediately we realized how amazing Detroit is, and how kind and loving.”

While living and working with your significant other may seem like a challenge, for this couple, the situation has been beneficial to their relationship.

Furthermore, Bynum shared to Pride Source, “This has been one of the best experiences because you really get to know somebody in this type of environment.”

It’s about finding a respectful balance.

Thomas went on to add to the conversation by saying, “A lot of people have told us that it would be a struggle to work with their partner and essentially be around them 24 hours a day.”

“We joke about being worried we have become co-dependent being around each other so much, but overall it’s a great relationship and we are very fortunate.”

Keith Bynum and Evan Thomas got engaged five years ago

Thomas and Bynum have been together for over a decade. They have known each other for nine years, and even though the couple isn’t married until now, they are engaged.

The duo got engaged on March 21, 2017, and they recently celebrated their anniversary on the day they got engaged.

On their 5th engagement anniversary, Bynum took to Instagram, captioning a selfie of him and Thomas, “5 years ago today we got engaged but we’ve been too damn busy to actually get married. One day!”

Also, in the hashtag, he added “#5yearsgoestoofast.”

Although they spend a lot of time together at work, they enjoy outdoor activities like hiking, kayaking, and skiing. They also have a furry friend named Belle, a member of the family.

Thomas and Bynum frequently communicate their feelings and freely praise one another. On the other hand, Bynum appears to be a more frequent user of social media than Thomas. Because they share a professional space, the creative pair spends a lot of time together.

When it comes to marriage, the duo revealed that they don’t have a wedding date booked yet despite their 9-year-long relationship.

Both Thomas and Bynum are focused on their careers and plan to marry when the timing is perfect.

Before they started working together, Thomas and Bynum had different jobs in Denver.

Bynum founded his retail and manufacturing company when he was just 14 years old, and it has since grown into the national spotlight.

After discovering that reclaiming abandoned and damaged homes were his true calling, he eventually sold his company. On Craigslist, the West Texas native began carpentry and woodworking and began selling handmade farmhouse tables.

He even worked on their house before purchasing a property in a Rocky Mountain town to renovate.

Thomas eventually joined him, and the two began flipping properties. The couple decided to leave Denver, searching for a place that would allow them to enter the market more smoothly. So, in August 2017, they moved from Denver to Detroit and built a home for themselves.

It wasn’t easy because the residence was lacking in fundamental necessities. It lacked a working kitchen and bathroom, requiring extensive plumbing and electrical work.

There was no turning back from that moment on. Bynum was named President of Omnia, INC, a Detroit-based renovation and lifestyle company, in August 2017.

Through the Detroit Land Bank’s Own It Now Program, Bynum and Thomas began purchasing houses in their area for as little as $1000.

Although they did not make a lot of money, their efforts were noticed, and more people began to move into the area.

Because the idea was to make the houses modest, the creative pair recycled furnishings and building materials whenever possible.

They bought things from thrift stores, Craigslist, estate sales, and other places if they needed something. In Ferndale, Michigan, the pair also launched Nine Furniture and Design store.

In addition, Bynum is no stranger to HGTV, as he appeared with Jess Rothlisberger on an episode of Tiny Paradise in July 2017.