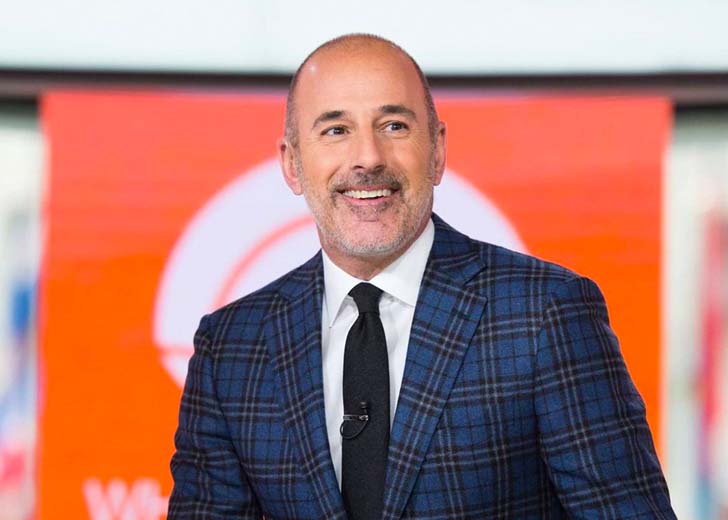 Matt Lauer has been married and divorced twice to date.

Matthew Todd Lauer, better known as Matt Lauer, is a former American television news personality. He came into the limelight for his works with multiple media/news houses, particularly with NBC News.

From 1994 to 1997, he served as the news anchor for The Today Show, and in 1997, he was promoted to co-host. Since then, he served as the program’s co-host until NBC terminated his contract in 2017 amid sexual allegations against him.

After Lauer was accused of sexual misconduct, his well-established professional life started to shatter. And the same began to happen in his personal life as well. However, it could also be said that his personal life wasn’t always on the right track. Here is a detailed look!

Lauer was first married to the Emmy-winning TV producer named Nancy Alspaugh. So, it’s fair to say that Lauer’s first wife is Alspaugh.

The formerly married couple first met each other in 1980 and eventually began dating in 1981. The following year, on July 17, 1982, they shared the wedding vows in an intimate ceremony.

However, their marital relationship didn’t last long as they parted ways around six years later in 1988 — their divorce was finalized in the same year. Additionally, the two were yet to welcome any kids in their marriage.

Although divorced, Lauer and Alspaugh seem to have maintained a good bond. Besides, Alspaugh even defended her ex-husband when he was accused of sexual misconduct. In her 2018 interview with Entertainment Online, she said:

I don’t think he’s been given a chance to defend himself, and I hope one day soon he will be able to tell his story. I’m sure it will be soon. He is beginning to feel like himself again, and people will finally hear his side of the story.

After their split, Alspaugh married Fox Sports Net executive H. Read Jackson. Together, they had adopted a son named Wyatt Jackson — when he was three, he was diagnosed with Autism.

On January 25, 2016, Alspaugh became a widow after her second husband’s death following a long and hard-fought battle with cancer. Since then, she has been raising her son as a single mother.

Almost a decade after Lauer divorced his first wife; the former news personality met his future second wife, a Dutch model named Annette Roque, on a blind date in July 1997.

They clicked and eventually started dating. Five months into their relationship, Lauer was ready to propose to his then-girlfriend — Roque said yes, and they got engaged. And on October 3, 1998, they shared the wedding vows in Bridgehampton, New York.

Less than three years after their marriage, on June 26, 2001, the couple welcomed their first child together — they had a son named Jack Matthew Lauer. Similarly, on October 2, 2003, Roque gave birth to their second child, a daughter named Romy Lauer.

In 2006, Lauer and Roque were expecting their third child. During that time, Roque had filed for a divorce against Lauer, citing reasons like “mental abuse, extreme mental and emotional distress, humiliation, torment, and anxiety.”

However, they seemed to have reconciled their relationship as Roque withdrew her divorce paper. On November 28, 2006, the almost-divorced couple welcomed another new member into their family; a son named Thijs Lauer.

After that, everything seemed fine between the married pair, and things were back on track. But, Roque’s filing for divorce later raised suspicions about Lauer’s faithfulness towards his wife and their marriage.

Fast forward to 2010, there were rumors of Lauer moving out of his house and having an extramarital affair. Lauer later denied these speculations during his interview with People as he called it “ridiculous” and “offensive.”

In addition, he said, “Have we had a completely perfect, easy marriage? No. But the stories you’ve read over the years are not true. I don’t think we’re any different than any married couple that’s been together for 12 years.”

“The accusations [of infidelity] are ridiculous, and I’m not going to [dignify] them with an answer. It’s not true,” he added.

Moreover, Roque was also interviewed by the outlet separately, and during her interview, she mentioned that they have had difficulties in their marriage in the past, but they “have worked through it.”

In July 2016, it was again said that Lauer was being unfaithful towards Roque after rumors of him having an affair with his former Today co-anchor Natalie Morales came out. And much like last time, the rumors were again denied.

In his interview with The New York Post, Lauer said, “Every aspect of this story is untrue, and it’s frankly sad that someone would tell lies to harm everyone involved.” “There is absolutely no truth to this completely absurd story,” Morales added on her part.

She continued, “It is damaging, hurtful, and extremely sexist. I have proven myself in all aspects of my job as a news professional and journalist, and am adding to my role, taking on three jobs with Access Hollywood Live and Access Hollywood, in addition to Today.”

“This move was dictated by me and my desire to grow in my career. Any insinuations beyond that are uninformed,” Morales concluded her story.

On November 29, 2017, the Today show co-hosts, Savannah Guthrie and Hoda Kotb, announced on-air that Lauer was let go from the media network after being accused of sexual misconduct by an unidentified female NBC employee.

Likewise, the memorandum sent by the chairman of NBC News, Andrew Lack, to other staff read, “On Monday night, we received a detailed complaint from a colleague about inappropriate sexual behavior in the workplace by Matt Lauer.”

“…While it is the first complaint about his behavior in the over 20 years he’s been at NBC News, we were also presented with reason to believe this may not have been an isolated incident.”

It was mentioned that the unidentified female NBC employee had reported about the sexual misconduct she suffered at the hands of Lauer during the 2014 Winter Olympics in Sochi, Russia — which had continued even after they arrived in New York.

Moreover, in a report published by Variety, three more unidentified women had come forward to allege that Lauer sexually harassed them. After three days of silence, Lauer finally released an official statement and apologized to his loved ones.

In October 2019, former NBC producer Brooke Nevils claimed via Ronan Farrow’s book, Catch and Kill, that she was “anally raped” by Lauer while working together at the 2014 Sochi Olympics. However, Lauer denied all allegations, saying, “Each act was mutual and consensual.”

After Lauer was accused of sexual misconduct, reports appeared that he and his second wife were already living separately. At the time, a source told Entertainment Tonight, “Matt and Annette lived separately, with Matt spending many nights in his Manhattan apartment.”

And after Lauer’s sexual misconduct allegations were made public, it became tough for Roque to even walk around in public. “As time passed, the humiliation turned to anger. The last two years of their marriage were hell,” the source told ET.

In December 2017, it was noticed that both Lauer and Roque had stopped wearing their wedding rings. At the time, Henri, Roque’s father, told DailyMail, “She is not going to stay with him and work it out. They are not together trying to work it out.”

Finally, after months and months of speculations, Roque finally filed for divorce from Lauer on July 2, 2019, in Suffolk County Court in New York. Their divorce was finalized on September 5.

As per reports, it’s said that Roque received around $20 million in assets and was also awarded the now-former couple’s Hamptons horse farm located in Water Mill.

And over a month after their divorce was finalized, Roque finally responded a little to the accusations against her ex-husband. On October 9, her lawyer told People that she is focused on her three children.

“In response to your inquiry, our client has asked us to tell you that now that the parties are officially divorced, her priority and only concern is for their wonderful children. Our client will make no further statements,” Roque’s lawyer John M. Teitler further said.

What is Matt Lauer doing now?

Since losing everything in 2017 and the following months, Lauer seems to be keeping a low profile for now and is currently residing in an undisclosed location.

Lauer might not have a wife now, but he presently relishes the company of his beautiful girlfriend, Shamin Abas. Abas owns a luxury brand marketing firm and is a marketing and public relations executive.

The now-dating couple had known each other for more than a decade before officially taking their friendship on a romantic turn. They officially began dating sometime around December 2019 and have been together since.

At the time, a source close to Lauer told Page Six, “Matt and Shamin have known each other for many years, as she spends a lot of time in the Hamptons, as does he. They very recently began dating; she is a lovely woman.”

In August 2021, the couple was seen together attending a country-set event in the Hamptons — where Lauer’s second ex-wife was also present. Nonetheless, the formerly married couple didn’t cross paths.