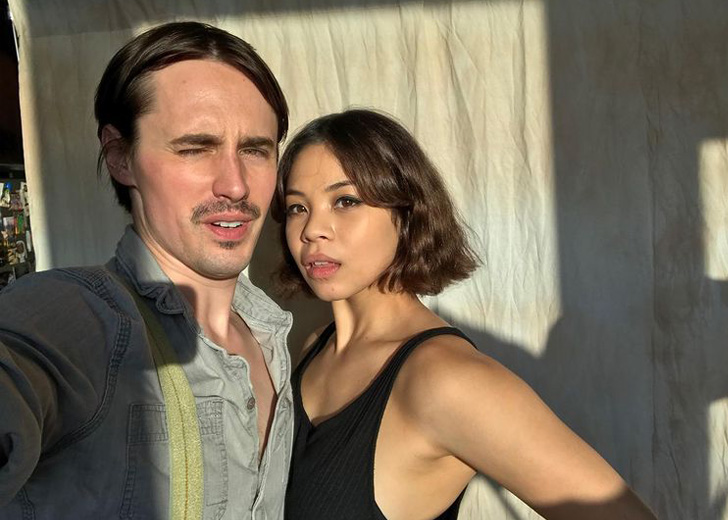 Reeve Carney and Eva Noblezada started as co-stars and slowly paved their ways upwards, from co-stars to great friends to a couple.

Similarly, at the same time, Noblezada was married to her husband, Leo Roberts — tied the knots on November 4, 2017. However, things were not good in their relationship. Besides, as per reports, they had split around six months ago, in early 2019.

The reports were confirmed when Noblezada eventually filed for divorce against Roberts. Following the divorce, Carney and Noblezada took their relationship slowly. After some time, they began to share pictures alongside each other via Instagram.

Scroll down to have a look at the couple’s relationship timeline on Instagram, after they officially began dating.

After Carney and Noblezada’s relationship was confirmed, both of them had taken a little break, for some months, from posting each other’s pictures on their respective Instagram handle.

On September 25, 2019, the American actress shared a picture alongside Carney, the only change was that this time he was her boyfriend. The picture was from their recent visit to the Metropolitan Opera, aka Metopera.

On Halloween, October 31, the couple took to their respective Instagram handle to share the same pictures. The picture was of them lying on the floor of Walter Kerr Theatre as Carney delivered a soft kiss on Noblezada’s cheek.

On November 30, the American actor shared a cute picture alongside his partner. Noblezada had wrapped her hands around Carney’s hands in the picture. “I love this shot!!” he wrote on the caption with a red heart emoji.

On January 14, the duo posted a gif of them posing in front of the Recording Academy/Grammy’s poster. Both of them had been nominated for a Grammy Award for their musical, Hadestown.

On the occasion of Valentine’s Day, February 14, the House of Gucci star shared a mirror selfie alongside his beau. In the caption, he mentioned that he hopes everyone has someone in their life who makes them feel as blessed as Noblezada makes him.

On March 10, Carney and Noblezada spent a little night off in the streets. He later shared a picture on Instagram too.

Later, on March 24, the actor shared a selfie captured with his girlfriend and wished her a belated happy birthday — Noblezada’s birthday falls on March 18. “So thankful for the birth of this angel on earth… Happy Belated birthday @livevamaria #March18th Incredibly grateful to be spending this time of isolation with you,” he wrote as the caption.

On the occasion of Carney’s 37th birthday, April 18, Noblezada shared a selfie captured alongside her boyfriend. In the picture, the birthday boy was all smiles while his partner was leaning into him, holding an ice-cream cone in her hand.

She captioned her post, “happy born day to my best friend! happy friggin everyday with you. you have shared the greatest gift with me. time to celebrate!”

On July 20, the West Village, New York native actor shared a selfie alongside his partner and their friend, Marina. The picture was taken just in front of Marina’s diner, La Bonbonniere NYC, which, as per Carney, is his and Noblezada’s favorite restaurant.

Three days later, he again posted a couple of snaps with his partner from their time at a bar named Dutch Freds. As per the post’s caption, it was the couple’s first night out in New York City since March 10, 2020.

Furthermore, on July 26, he shared a short clip of him cutting his girlfriend’s hair. “When your girlfriend trusts you enough to let you cut her hair! #Honored,” he captioned the post.

On August 18, Carney posted a selfie with Noblezada. In the caption, he mentioned that he is so grateful for his partner. “Just a little photo of us in front of Eva’s backdrop tonight during #GoldenHour!” he had further added.

On September 27, the duo took to their Instagram handles to share some different pictures from their short trip to Fire Island Lighthouse.

On October 31, Carney and Noblezada celebrated their second Halloween as a couple. On that day, she posted a mirror selfie with her partner and captioned it with some spooky Halloween emojis.

On November 3, 2020, they voted for the first time as a couple. Marking that special occasion, Carney shared a selfie with Noblezada, and captioned it, “What an honor it is to vote alongside this gal, @livevamaria. Today’s the day!!! #Vote Vote Vote!!”

On November 14, he posted yet another picture with his partner in which he mentioned that Noblezada had brought her a statue of a monkey holding a lightbulb.

On November 26, Carney celebrated Thanksgiving with his girlfriend. He had shared a picture with her via Instagram from their outing in New York to wish his well-wishers on that occasion.

On the occasion of Christmas Day, the actor shared a clip on Instagram. The clip was of him, Noblezada, and other of their friends singing a Holiday Special song.

On January 14, 2021, Carney shared a picture of his partner where he mentioned that he was very proud of Noblezada and everything she was working so hard on at that moment.

In the same month, January 27, he shared a picture alongside his mother and girlfriend, on the occasion of his mother’s birthday. Through the caption, he stated that his mother spent the holidays alongside him and Noblezada.

On February 14, the love birds celebrated their second valentines day as a couple. On that day, he posted a kissing picture of him and Noblezada. “Don’t know how I’d fully express my gratitude for this incredible woman with whom I am so grateful to spend every day… #HappyValentinesDay,” he captioned the post.

On March 15, Noblezada shared a picture alongside Carney and her sister, Olivia Noblezada. She captioned the post, “my heart! sis, we miss you already.”

A day after her 25th birthday, March 19, she posted a picture with her partner in which she was kissing Carney’s cheeks. “Also psyched to be in LA with my partner-in-prank for some chillaxing Thank you, God, for another year of being a goofball with the people I love,” she captioned.

On April 13, the actor shared a picture with Noblezada. In the post, he mentioned how he hadn’t spent more than one day apart from her in the past two years. Continuing his caption, he wrote that he will really miss her now that they have to head to separate places for their profession.

Five days later, on April 17, Noblezada shared a picture with Carney on the occasion of his 38th birthday. To celebrate his birthday with his partner, Carney had flown to Rome.

On June 10, Noblezada shared a picture on Instagram from her and Carney’s 2019 Tony Awards photoshoot. She added a humorous caption reading, “Wanna feel old?? The 2019 Tony awards were 15 years ago…we’re still kicking it baby.”

On the occasion of his sister, Paris’ birthday, July 13, Carney posted a group selfie, where he, Noblezada, Paris, and other of their friends were seen.

On September 2, the California native actress shared a group picture alongside her fellow cast members of Hadestown, including Carney. She and Carney were standing in the middle, with others surrounding them.

Two days later, Carney also shared the same post with the caption, “To the world we dream about, and the one we live in now… So excited and thankful to be back @hadestown.”

On September 7, Noblezada posted a picture where Carney was lifting her in his arms, all smiling, while she delivered a soft kiss on his cheeks. A red heart emoji was used as the caption.

At the almost end of the month, September 22, Carney shared a glimpse of his romantic night out with his girlfriend. The location tag on the post suggested that they were at the American Museum of Natural History.

On October 1, Carney shared a picture with his and Noblezada’s newly adopted pet dog, Petunia Noblezada-Carney. In the caption, he mentioned that he had never thought he would be a dog person, but now he apparently is, thanks to his partner.

On October 13, Noblezada shared a happy moment that was captured alongside her partner. Similarly, on October 18, she again posted some snaps from her small outing in the woods with Carney.

On October 25, he posted a series of pictures from this year’s Halloween party, where he and Noblezada dressed up as Romeo and Juliet. Noblezada had also posted the same pictures on the same day.

On November 9, Noblezada shared a picture on Instagram where she was seen kissing Carney. “what a special human you are geeeeeez,” she captioned the post.

The most latest post on Carney’s Instagram handle was on November 17, when he had shared a perfect cute selfie alongside his girlfriend from the House of Gucci premiere night. “So grateful to have you by my side for all we are so blessed to do!! What a wonderful night! @houseofguccimovie More to come!” he captioned the post.

On that same day, Noblezada had also posted some moments from the night of the House of Gucci’s premiere. One part of her caption said, “My love, you are remarkable. Seeing you on the big screen was a rush! Congratulations!”