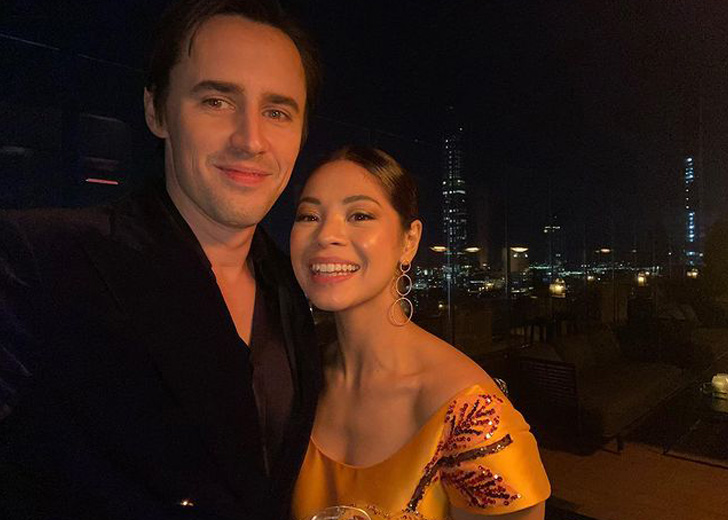 Reeve Carney is a Grammy Award-winning American singer-songwriter and actor. He first received huge limelight in 2010 when he originated the role of Peter Parker/Spider-man in the Broadway musical, Spider-Man: Turn Off the Dark.

Since then, he has never looked back and has continued to climb the ladder of success through his talent. His portrayal of Dorian Gray in the 2014-16 TV series Penny Dreadful also provided him with fame.

Most recently, he made his appearance in the star-studded movie titled House of Gucci. In it, he portrays the role of Tom Ford.

While there hasn’t been much discussion on his professional life, Carney’s personal life has certainly raised some eyebrows. It is because of his romantic relationships with ladies as well as the rumors of him being gay.

Back in mid-2014, rumors of Carney being gay began to surface. It first originated after the actor’s character, Dorian Gray, shared a same-sex kiss with actor Josh Hartnett’s character, Ethan Chandler, in the show Penny Dreadful.

After the viewers saw the two lead characters of the show sharing a passionate kiss, they began to wonder if the actors who played the roles were gay in real life. However, the rumors are false as neither Carney nor Hartnett is gay.

Besides, Hartnett is actually married to his longtime wife, Tamsin Egerton. They tied the knots in 2012 and have three children now.

The Manhattan, New York City native star is currently in a relationship with his Hadestown co-star Eva Noblezada.

A source had told the outlet, “Reeve was kissing her neck. They’re clearly romantically involved.”

At that time the two were spotted together, Noblezada was still married to her longtime boyfriend Leo Roberts — got married on November 4, 2017. However, there were reports that the married couple had split around six months ago, in early 2019. The reports were confirmed when Noblezada eventually filed for divorce against Roberts.

After the actress filed for divorce, it was pretty much confirmed that she was together with Carney. There were also pictures of them spending some quality time together.

On Valentine’s Day 2020, Carney shared a picture alongside his now-confirmed girlfriend. He had also written a lovely caption, “Hoping you all have someone in your life who makes you feel as blessed as this one makes me. Happy Valentine’s Day!!!”

Since then, the duo has featured each other on their respective Instagram handles several times. Recently, on November 10, 2021, Noblezada posted a kissing picture with Carney, with a cute caption.

Well, going by those, it seems like their relationship is going strong and they have immense love for each other.

Before developing a loving bond with his present girlfriend, Carney was engaged in a number of romantic relationships.

As per reports, he began dating Australian singer-songwriter Lisa Origliasso in November 2008. The couple was together for a long time before they decided to end things in 2011. The reason behind their split was undisclosed.

In 2011, he briefly dated his Spider-Man: Turn Off the Dark co-star Jennifer Damiano, who also happened to play the love interest of Carney’s character in that show. However, they broke up after a while.

Later, in September 2011, he began dating the American actress Ashley Greene. They were seen hanging out and shopping together multiple times in New York. Carney’s relationship with Greene didn’t last long and they parted ways over a year later, in October 2012.

After that, there were gossips of him dating the famed singer-songwriter, Taylor Swift. The rumors began after Carney played the role of Swift’s bad boy lover in her music video titled I Knew You Were Trouble.

It seems like the chemistry between the two in that video made people wonder if they were actually dating. Nonetheless, they were just rumors, and Carney and Swift were not dating.

When that rumor was silenced, no further reports regarding the 38-year-old actor’s love life came for some years, until 2016. In October 2016, he formed a romantic relationship with his Rocky Horror remake co-star Victoria Justice.

Their togetherness lasted a little over two years — they split in February 2019. Following that relationship, he stayed single for a while until he began dating his current girlfriend Eva Noblezada.