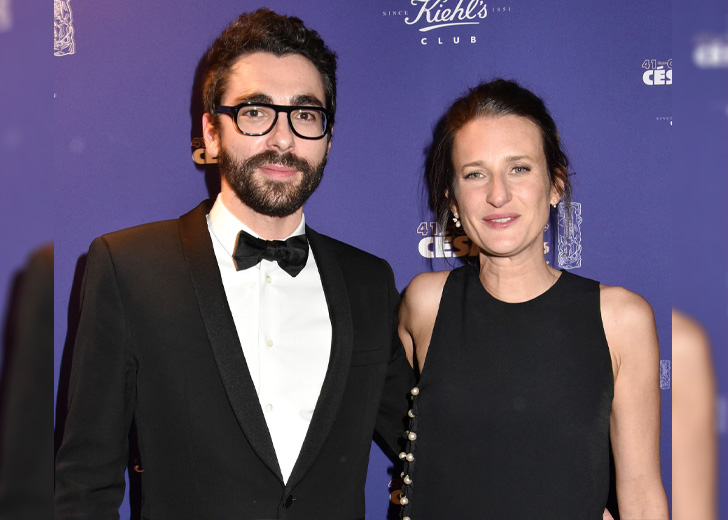 Camille Cottin is a French actress who has garnered the limelight for her portrayal as Andréa Martel in the French drama-comedy series Dix pours cent (English title: Call My Agent!). For her performance in it, she won two A.C.S. Awards and one Globe de Cristal Award.

She recently made her appearance in the star-studded movie House of Gucci, released on November 24, 2021. Accompanying her in the movie were Lady Gaga, Adam Driver, Youssef Kerkour, Al Pacino, and many more.

Coming over to her personal life, she has rather kept it very private and shared only little details on her romantic life.

Is Camille Cottin Married to a Husband?

The Killing Eve star is a happily married woman. She has been married to her husband for over one and a half-decade, as of this writing.

Before 2013, Cottin was very private about her romantic life and had rarely shared any details about it. Due to that, nothing much was known if she was married to a husband or had a boyfriend.

However, all of that changed after her 2013 interview with French GQ Magazine. During the interview, she was asked if she has a significant other in her life. In reply, Cottin said yes and went on to mention that she and her husband had been married for eight years, at that time — got married in 2005.

As mentioned earlier, Cottin has kept her romantic life away from her limelight. So, there isn’t much information made public about her married life.

She also hasn’t shared any pictures of her partner via her social media handles. Nonetheless, the actress has walked down some events and red carpets alongside her beau. For instance, the duo was photographed together at the Cesar Film Awards in February 2016 in Paris.

Who Is Camille Cottin’s Husband?

Cottin’s husband of over 15 years is Benjamin Mahon. During her above-mentioned interview, she had mentioned that her husband is an architect by profession.

Besides those, she didn’t give out any other details on her husband, and it remains the same to this day. Nonetheless, Mahon’s LinkedIn profile gives us an idea that he has been working at Saint Laurent for over 13 years.

Since then, he has been serving in the same position and impressing everyone through his talent.

Camille Cottin and Her Husband Are Parents of Two Children

Cottin is also a mother. She and her husband share two children from their marriage.

During the previous interview with French GQ Magazine, she revealed about having a partner as well as a three-year-old son named Leon.

In June 2015, news of her being pregnant came out after making her appearance in Disneyland, flaunting her baby bump. Later, in October 2015, Paris Match reported that the actress gave birth to her second child, a daughter named Anna, around two months ago, August.

The outlet mentioned that Cottin revealed the details during her interview with Télé 7 Jours.

The Family of Four Spent the Lockdown in Normandy

Although Cottin prefers to keep her marital life low-key, she did give out some details on how she and her partner, alongside their two children spent the lockdown.

In an exclusive interview with Irish Times, in January 2021, the actress mentioned that she had just wrapped up the filming of Call My Agent!’s final episode in March 2020. Afterward, she and her husband and their two kids went back to their home in Normandy.

“We had recently bought this old farmhouse with my sister and mother, and we were in the middle of having it restored,” she told Irish Times. “We arrived with another friend, the standup comedian Camille Chamoux and her family, and we all lived in this building site, doing homeschooling, growing vegetables and writing [Chamoux’s show] Le Temps de Vivre.”

The Paris, France native also mentioned that she was terrified by what she heard, read, and saw on the news. “The long queues at the food banks, the sharp increase in domestic violence, the school closures… It was horrid,” she added.

During the second lockdown, in late October 2020, Cottin tested positive for COVID-19 after coming in contact with someone who had tested positive at the French TV festival Cannes Series.

While speaking on what she did during her recovery, she stated that she spent several days bingeing TV shows at her home while her husband looked after their children. She eventually recovered and tested negative.

However, her husband as well as the children got tested positive for COVID-19. Nonetheless, things were not that bad. “We were lucky. We all had it mildly,” said Cottin. As of now, all four of them have recovered and are going on with their daily lives.