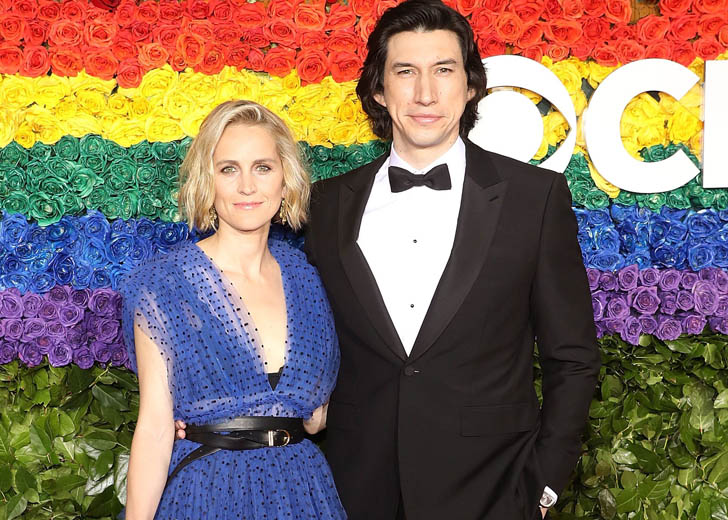 She has also made her appearance in several off-Broadway productions. Most recently, in 2021, she portrayed the role of Pam Novick in the TV series titled American Rust.

While Tucker, age 39, has earned fame through her own works, she has also gained popularity through her marital relationship. Joanne Tucker is currently married to the two-time Academy Award-nominated actor, Adam Driver.

Tucker has been in a marital relationship with the Marriage Story star for over eight years.

The now-married couple first met each other in the early Noughties while both of them used to attend The Juilliard School, a prestigious drama school in New York. They fell in love and began dating.

After years of dating, in 2012, Driver, age 37, decided to take a further step and proposed to Tucker. She said yes and they got engaged. In the following year, on June 22, 2013, they walked down the aisle and shared the wedding vows.

Their marriage ceremony was very secret and to this date, the venue of that day isn’t known and there are no pictures of their wedding available. Nonetheless, it is believed that Driver’s co-star Lena Dunham and her then-boyfriend Jack Antonoff were there.

During the time of their wedding, some sources told Us Weekly, “they [Tucker and Driver] are very sweet together. They’ve been dating forever — years — and live together; [they’re] very comfortable and in love. She was with him before the Girls’ fame. They both love theatre and the arts. She respects him so much…Everyone on the show is very happy for them.”

Following their marriage, they have been living happily as they used to. Both of them prefer privacy and are not available on social media, due to which there aren’t many pictures of them, except those taken during red carpet events.

The two are often seen accompanying each other during movie premieres, events, and red carpets, and award shows.

Tucker and Driver Are a Parent of One

Three years after they got married, in 2016, the couple welcomed a baby boy. However, as they prefer privacy, they kept it private and didn’t mention it to anyone else, apart from their close friends and family.

Around a year later, in February 2017, Driver gave a small clue during his video interview with W Magazine. During that interview, he mistakenly slipped up and mentioned a child. But, he immediately backtracked and laughed awkwardly.

Later, in September 2017, Driver’s Logan Lucky co-star Channing Tatum also gave a hint when he accidentally slipped and said that his friend, Driver, had a child. However, Driver again avoided it and managed to laugh off the rumors.

Almost three years after the birth of their child, in October 2019, Driver finally confirmed that he and Tucker have a son, during a New Yorker profile. Additionally, he compared keeping the birth of his son to a ‘military operation.’

He stated, “My job is to be a spy – to be in public and live life and have experience. But when you feel like you’re the focus, it’s really hard to do that.”

Although it is confirmed that Tucker and Driver have a son, the name and other details of their baby are yet to be revealed. And it seems like the married couple tends to keep it that way.

Nonetheless, despite the couple’s secrecy, the family of three is often spotted having family vacations. Recently, on March 29, 2021, Page Six revealed that Tucker, Driver, and their son were in Rome, Italy, having some fun family time.