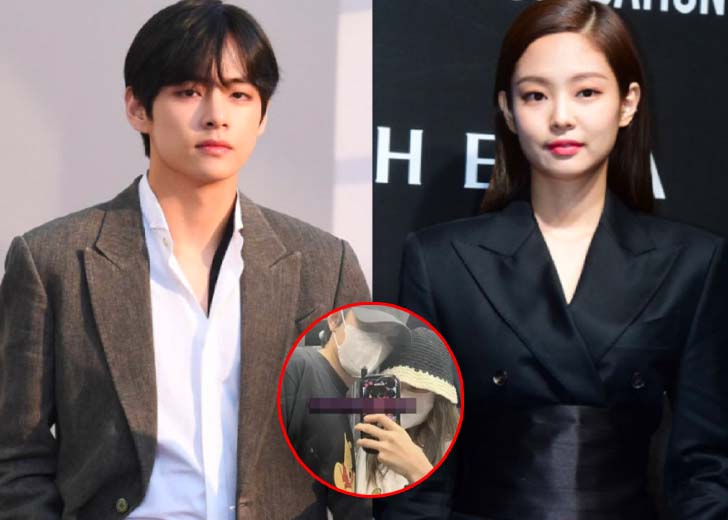 V from BTS and Jennie from BLACKPINK have been the center of attention for several days. The K-pop stars have been rumored to be dating after new photos of them together surfaced from time to time.

On August 29, V and Jennie’s recent picture was leaked, and in the picture, the two are dressed in black and white Winnie the Pooh couple T-shirts.

As of now, neither of the artists’ agencies has responded to the claims of their romance or the new update with this photo. It is unknown whether the selfie mentioned above is real or fake.

Many of their fans also believe that professional editing skills were used on the stars to put them together.

When did the dating rumor of V and Jennie start?

Later, on May 22, a photo of two people traveling on Jeju Island went viral after netizens recognized the faces as Jennie and V.

The man and woman in the picture were seated next to each other in the car and were sporting sunglasses, but because of their side profiles and hairdos, it was widely believed that they were V and Jennie.

However, it’s impossible to confirm it’s V and Jennie because the photo appears to have been edited.

However, after V and Jennie’s Jeju photos were released, fan’s discovered some of their Instagram posts were strangely overlapping, raising suspicions about Lovestagram.

V posted pictures from his trip to Jeju Island and changed his profile name to ‘V.’ The question of whether he matched with Jennie’s Instagram name ‘J’ arose immediately.

Fans react to the rumors

Fans are questioning the integrity of the rumors and leaked pictures after the photo of Jennie and V were leaked. Many people, however, believe V and Jennie are dating.

The person who leaked the photos stated on August 30 that they sent several messages to Jennie but did not receive a response. They also said they would release more pictures of V and Jennie kissing and hugging.

Regarding photoshop, the leaker stated, “Other than adding a watermark, I made no changes. If I did, I want Jennie, V, or their attorneys to contact me and file a complaint. Please notify YG Entertainment and Big Hit Music if you believe I’ve done something wrong enough to warrant arrest.”

Furthermore, fans of K-pop stars are upset with their respective agencies, Big Hit Music and YG Entertainment, for not clarifying the dating rumors and allowing trolls to fuel the fire.

Now, when the hacker threatens to release more photos of V and Jennie, mainly intimate photos, fans are calling on YG Entertainment and Big Hit Music to take action to prevent the hacker from defaming the two idols.

Advertisement
Related Topics:BlackpinkBTSJennieV
Up Next