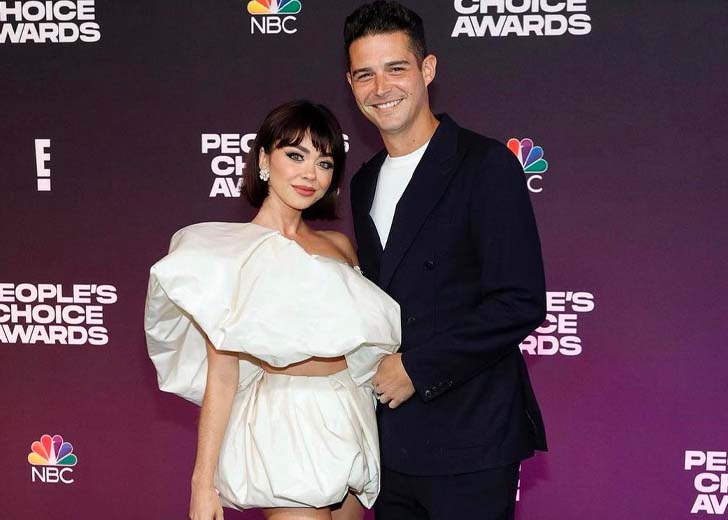 The couple was together for 5 years before tying the knots.

On Saturday, August 20, 2022, the Modern Family star walked down the aisle to share the wedding vows with the Bachelor in Paradise bartender. A source told People that the intimate outdoor wedding occurred at Sunstone Winery near Santa Barbara, California.

The outlet also confirmed that the newlyweds had invited their close friends and family members along with the actress’s Modern Family co-stars, including Sofia Vergara (and her son Manolo Vergara), Nolan Gould, Julie Bowen, and Jesse Tyler Ferguson (and his husband, Justin Mikita).

Additional details about the couple’s wedding are yet to be revealed. However, Vergara’s Instagram stories revealed that there were drinks, a photo booth, and a delicious three-tier cake decorated with all sorts of flowers.

A month before they legally became a husband and wife duo, Hyland talked to People about her wedding day and her thoughts on married life. She said, “We are practical. We own a house together.”

“We have our dogs together, and we’ve been celebrating this journey of life supporting one another for almost five years now. So I don’t think a lot is going to change,” she said before adding that she was making plans for her wedding “one step at a time.”

She also claimed that she didn’t “have a lot of time to think about it” as she was preparing for her upcoming role as a host. Nonetheless, she said she was looking forward to the next chapter of her life by adding, “I’m really excited to be able to — on paper, officially— start our family.”

Hyland and Adams had initially planned to tie the knots in August 2020, but all of their plans failed multiple times due to the rising concerns of the COVID-19 pandemic. Although the wedding got postponed, they did a mock wedding photoshoot on their supposed wedding day.

One year after the couple’s wedding was delayed, in August 2021, Adams sat down with People and mentioned that he and Hyland were hoping to settle legally in 2022. He then joked that they would “go to Vegas or the courthouse” if their wedding got postponed again.

The now-married couple first met through social media and started their conversation after flirting on Twitter in 2016. At the time, Hyland had a not-so-secret crush on her now-husband during his time on season 12 of The Bachelorette.

In 2017, they officially got together, and it became the start of a beautiful journey they were about to embark on. During 2017’s Halloween, Hyland and Adams surprised their fans by cosplaying as Stranger Things characters.

After that, they enjoyed their time, first in Adams’ hometown of Nashville and then in Hyland’s home in Los Angeles, all of which they documented on Snapchat and Instagram.

As years passed, their togetherness became stronger and stronger. Finally, Adams thought it was the perfect time to take a further step in their relationship, and in the summer of 2019, he proposed to Hyland.

Posted on July 21, 2022July 21, 2022
Simu Liu and Jade Bender have made multiple public appearances together in the last one month.
Read More