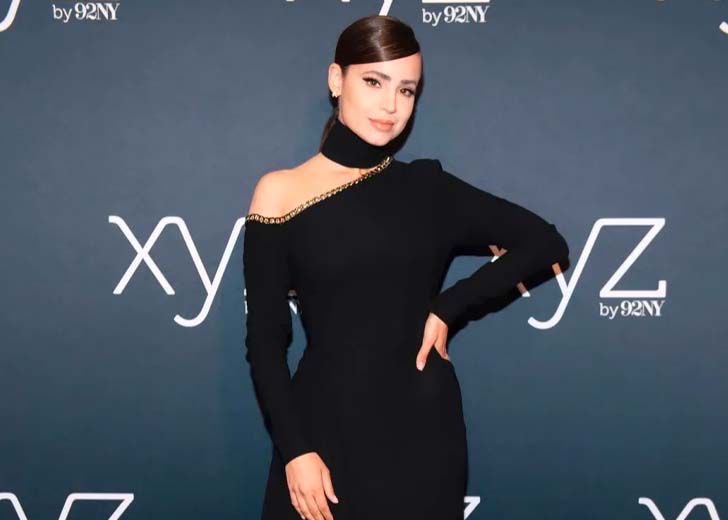 Many Hollywood celebrities tend to keep their dating life private. Sofia Carson is one of them.

She has a reputation for keeping her romantic relationships private and deflecting when asked about it. Speculations have tied the actress to a few boyfriends since her breakthrough role in the Disney Channel’s Descendants series.

But other than that, it looks that the star has solely been involved with on-screen love relationships. Here is everything we know about her dating life and if she has a boyfriend.

Does Sofia Carson have a boyfriend?

It is unknown if Carson has a boyfriend. However, the Purple Hearts actress has been linked to Manolo Gonzalez Vergara, son of Sofía Vergara, for a long time.

In fact, the pair have been romantically associated throughout Carson’s career. Fans were convinced they were more than pals when she snuggled up to him in an Instagram picture from December 2016.

Similarly, in February 2018, Manolo performed squats in an Instagram video while holding Carson over his shoulders and in front of him. This let the speculation about their connection erupted once more.

On the other hand, the duo has neither acknowledged nor disputed their dating rumors. As a result, whether they ever had romantic feelings for one another is unknown.

Sofia Carson on her dating life

In a January 2022 interview with Extra, Carson said she decided to keep her dating life private. She noted that it was “absolutely intentional” to do so.

She said she would only like to put her art, music, and movies in the world —  not her dating life. While the actress loves sharing some personal moments with her fans, she will not publicize her personal life.

She said, “it was definitely a choice to keep my private life private because it’s not what this is about for me. It’s about more than that.”

In an interview with Coveteur in December 2017, she discussed her song ‘Ins and Outs’ and her love life. She said that she had been frightened of falling in love solely because it implies being vulnerable and that you may be wounded.

She said, “I don’t know what it is, but even when I was a little girl, I would always write really emotional, really dark love songs about my heart being broken — even though I had never even kissed a boy at the time.”

She reasoned that she might have gotten her “heart really broken” in her past life. She hinted that she was heartbroken at the moment while giving the interview.

However, she did not mention if she broke up with her boyfriend or if something happened in her dating life.

All in all, Carson is not interested in sharing her boyfriend or love life to the public. In a May 2019 interview with Cosmopolitan, the actress said that she had never tried dating apps to date.

Then, she hinted that she did not want to as well since she said, “I’m dating my career.” In the same interview, she confessed to not wanting to date anyone from the Hollywood and entertainment industry.

She said, “I made a decision about two years ago that I don’t want to date anyone in the [entertainment] business. So as you can imagine, that makes it a little bit difficult.”