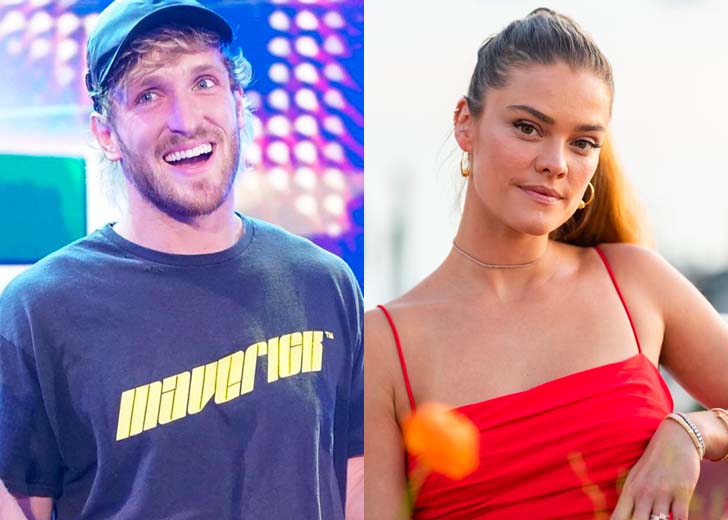 On Wednesday, August 24, 2022, DailyMail exclusively confirmed Paul and Agdal’s togetherness by releasing multiple PDA-filled pictures of the duo as they enjoyed their vacation in Mykonos, Greece.

In one of those pictures, taken on August 22, the American YouTuber grabbed the Danish model’s buttocks as they headed out to the beach. He repeated the same activity near the seashore as well as they shared a passionate kiss.

Afterward, the duo went on their water activities, like snorkeling, cuddling in the seashore, checking out a sea urchin, and more.

Paul was shirtless and wore red fight shorts only, whereas Agdal was wearing a zebra-striped thong bikini with green, neon pink, and orange accents. Likewise, she had gone natural without makeup. On the other hand, he looked tanned.

The confirmation of Paul and Agdal’s togetherness comes months after it was speculated that the two were an item. The speculations first started on June 15, 2022, after they were seen getting cozy at a London-based restaurant Novikov.

Following that, the couple was spotted other times during their outings in New York City and London. On July 24, the two were again seen together as they sat to enjoy dinner with a friend in SoHo, Manhattan.

Before their dinner date with a friend, Paul had addressed his dating life during one of the episodes of his Impaulsive podcast on July 12. In the episode, co-host Abby Majlak tried to make Paul give more insight into his dating life while not name-dropping Agdal.

He said, “I don’t wanna say anything, you know why Abby, because making stuff that hits that close to home and is that personal to you public, sometimes can ruin a good thing. And I don’t wanna do that just yet. I think I got something good here, and I’m not gonna ruin it. I’m not going to [expletive] it up.”

“The exploitation of one’s life is a dangerous practice. We do it with ‘Impaulsive,’ we’re happy to come out here and chat [expletive] about our lives. But I find that often it can get in the way of my personal life,” the Ohio native added.

Although Paul didn’t say anything about his dating life or romance with Agdal at the time, their PDA moment proved they are in a romantic relationship. For now, neither of them has publicly spoken about their love.

Similarly, the Sports Illustrated Swimsuit Issue model was previously dating Leonardo DiCaprio from May 2016 to May 2017. At that time, a source told People that DiCaprio’s unwillingness to settle down was the main reason behind their breakup.

Besides DiCaprio, Agdal was in a relationship with Jack Brinkley-Cook from 2017 to 2021. Brinkley-Cook is a celebrity family member who is the son of renowned American model Christy Brinkley.