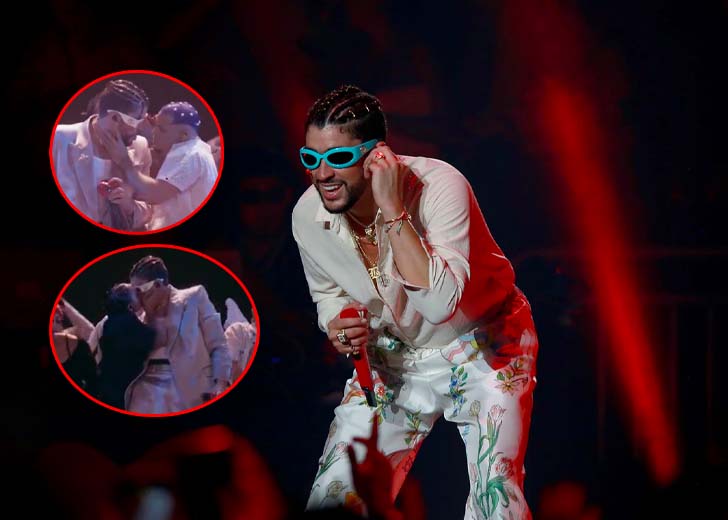 After becoming the first Latin artist to win Artist of the Year at the 2022 MTV Video Music Awards, Puerto Rican rapper Bad Bunny performed a part of his ongoing World’s Hottest Tour at the Prudential Center in Newark, New Jersey, on August 28.

During his VMA performance, Bunny was caught kissing backup dancers on stage. He locked lips with a male and a female dancer, one after another, which shocked the fans.

Bad Bunny is called out for QueerBaiting over the VMAs kiss

The VMA winner is being criticized for QueerBaiting during his performance of ‘Titi Me Pregunto’ at the MTV Video Music Awards(VMA).

He not only shared a kiss with his female dancer but also passionately kissed his male dancer while singing ‘Titi Me Pregunto.’ The fans are calling him QueerBaiting as fans believe he is just claiming to be a part of the LGBTQ+ community while he is actually not.

In his song videos, Bunny frequently criticizes homophobia in the music business and includes queer people. He was also seen kissing a man in his 2019 music video, ‘Caro,’ which led many fans to think he might be bisexual or gay.

Additionally, on March 28, 2020, Bunny dropped ‘Yo Perreo Sola,’ loosely translated to ‘I Twerk Alone,’ where he got a full drag makeover and seductive dance video that might have angered homophobic people.

In an episode of Only Stans podcast, Ryan and Taylor debate if the video is QueerBaiting, an example of LGBTQ+ culture being copied, or if Bunny is paving the way for a broader acceptance of queer people.

Ryan described how people tend to appreciate these queer aesthetics from an obvious straight guy rather than the queer folks.

Taylor agreed and added that she finds it frustrating that all straight males borrow gay culture since it is fashionable and get credit for it, but those who practiced it first are not.

However, Bunny is straight as he stated, “at the moment I am heterosexual and I like woman” in an interview with Los Angeles Times. But, he also stressed how his sexuality does not define him and might get interested in a man in 20 years.

Even though Bunny identifies as straight, he has been a perfect ally to the LGBTQ+ society, whether involving queers in his videos or honoring a Puerto Rican trans woman on The Tonight Show with Jimmy Fallon.

During his performance of ‘Ignorantes,’ he wore a shirt that said “Mataron a Alexa, no a un hombre con falda,” which translates to, “They killed Alexa, not a man in a skirt.”

Alexa was a black trans woman who was harassed by a group of men and was haunted and killed, as per Pride. The shirt was a call out to Puerto Rican media, who pointed out Alexa as “a man dressed in a black skirt” who had been killed.

Fans react to Bad Bunny’s kiss with his backup dancers

Many fans were shocked to see the ‘I Like It’ singer sharing a kiss with his dancers. He kissed a woman and man simultaneously while his girlfriend watched him.

“OMG GIRL, BAD BUNNY KISSED A MAN DURING HIS PERFORMANCE,” tweeted on his girl fans, while another tweet commented, “I think he is bi.”

“He needs to stop queerbaiting,” wrote the third Twitter user, followed by “queerbaiter.”