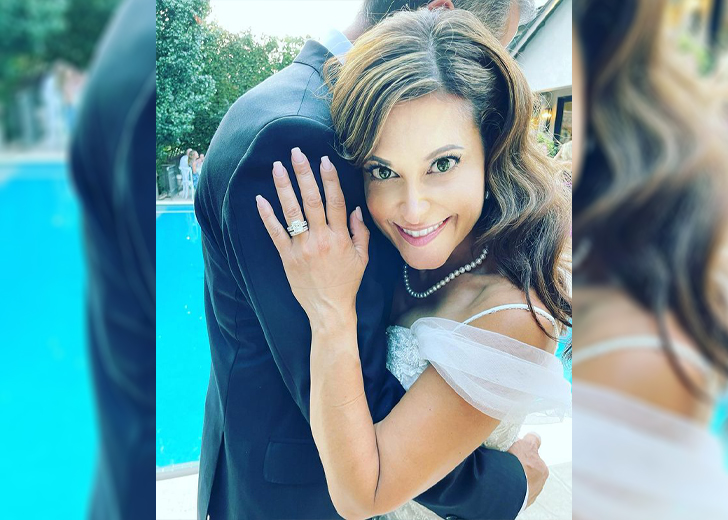 Congratulations to Laura Garcia who recently tied the knots with her long-time fiancé, Keon Vossoughi.

On September 9, 2021, the multiple Emmy Award-winning journalist took to her Instagram handle to officially spill the beans on her wedding.

“I said #ido !,” Garcia wrote as the caption with a red heart and ring emoji attached to it. Additionally, she also went on to use several hashtags such as “#happiestday,” “#weddingday,” “#happiness,” “#weddingphotos,” “#truelove,” and many more.

In the picture that she had posted, she was seen hugging her new husband while still keeping his face hidden amongst the world. Garcia could be seen donning a lovely wedding gown with a pearl necklace making her beautiful as ever.

A big diamond ring specially made for the occasion by Willow Glen Diamond Co. was shining on her ring finger. Following the announcement, the comment section of that post was filled with love and congratulatory messages.

“Congrats ! Happy for you!!!,” said a well-wisher of the journalist.

Another took to the comment section to write, “Wishing you both years of love and happiness.”

The NBC anchor had also shared some amazing pictures from her special day through her Instagram stories.

In the first picture, she was seen getting ready for her wedding. Through the story, she thanked her makeup artist for making her look beautiful on one of her most special days.

Later, she shared another picture where one of her daughters was getting ready to attend her mother’s wedding.

At last, she shared a selfie taken of herself alongside three girls whom she mentions as “My beautiful new daughters.”

Garcia and her now-husband Vossoughi had been together for a long time before sharing the wedding vows. After dating each other for a while, they got engaged.

Before tying the knots with Vossoughi, Garcia was in a marital relationship with Brent Cannon Schweigert. They married in 1997 and got divorced 19 years later, in 2016. During their married life, they were blessed with triplets: Katherine, Claire, and Jack.