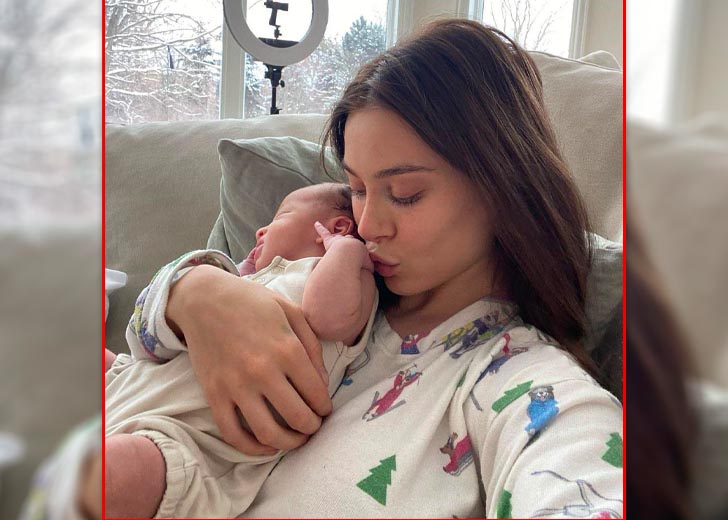 Lana Rhoades gave birth to her only child at the age of 25.

Lana Rhoades, who gave birth to her baby Milo in January 2022, is determined to keep the details of her baby daddy undisclosed.

Speaking on Bradley Martyn’s Raw Talk podcast in May, the supermodel was asked why she hadn’t disclosed her baby’s father. In reply, she got candid about her reasons.

Rhoades subsequently shared that she was open to talking about the situation but when it comes to her private partner, she always wanted to keep him “anonymous.”

She even explained the decision to keep her baby’s father private was the kind of respect she wanted to give him. Moreover, the baby daddy also asked her to do that for him, as he apparently wanted to stay out of the limelight.

So definitely the internet personality isn’t giving out the name of her baby daddy anytime soon.

In addition, Rhoades talked about her motherhood experiences and how she was handling mixed responses from people on the internet.

“I wanna ask you though about what it what it’s like being a mother and like dealing with you know the internet and the you know the everything that comes along with it and obviously like keep keeping your kid off of it,” Martyn asked.

He added, “People are all curious who the father, what’s the relationship like, how did this happen…what is that like and you’re so young.”

Replying to that, she first unveiled that she was just 24 when she became pregnant with her son. At 25, she eventually gave birth to Milo.

“Yeah, now I’m 25. So I mean I feel like that’s a good age to have a kid,” she said before sharing the struggles of becoming a working mother.

“The only downside is I guess that what I do for a living revolves around my appearance and the way that I look. So that’s been extremely difficult.”

Not just that, she received various mean messages from netizens because gained nearly 20 pounds weight after becoming a mother.

However, despite all the criticism and struggles, Rhoades said that she had started feeling comfortable about her body and looks.

“That’s been a struggle, being young and having a baby, and then also having social media as a career, being a model,” she added.

“…having to perform or look a certain way or be perceived a certain way so that you can continue to post content. Everyone’s going to tell you how they think that you look you know…they don’t care that you just had a baby it’s like oh you’re fat now.”

In the two hours long podcast, the diva went on to explain how people are naturally attracted to negative things, and that made her keep some of her personal stories within herself.

With that decision, Rhoades has apparently been able to live a life she wanted for herself, her private partner, and her baby. But to keep her well-wishers updated, she also occasionally posts pictures with her son on social media.