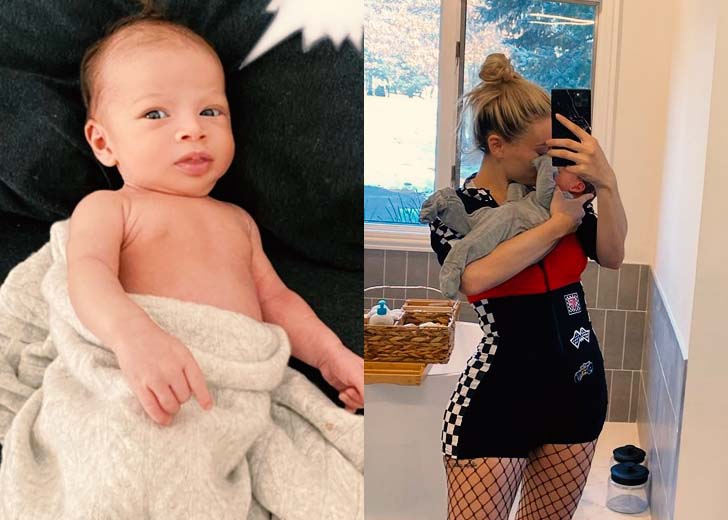 Lana Rhoades has been relishing some of the best days of her life as a mother.

The American model gave birth to her only son on Friday, January 7, 2022. Following her baby’s birth, she initially took some rest for a few days. Now, she has been flaunting several baby pictures via her Instagram handle.

Rhoades first announced the arrival of her baby boy on January 9, 2022, when she shared a picture of her holding her baby on her chest via an Instagram story.

Two days later, on January 11, she had shared a picture of herself standing outside of her car. The doors of her car were open, and a baby car seat cart was seen in the vehicle’s back seat.

She first posted a picture of her newborn on January 13, when she officially announced the birth of her child. She had shared three photos, and the first one showed the date of birth – January 7 – and her son’s weight – he weighed 7 lb and 3 oz. The time of delivery was around 7 pm.

The second picture was of her son lying on a soft foam seat inside his baby crib. In the caption, Rhoades mentioned that since she gave birth to her son, every day feels like Christmas morning. “I am loving every second of being a mom and feel so blessed!” she added.

Recently, on Thursday, January 20, she posted a short clip of her dancing to Lil Wayne’s Mrs. Officer while holding her kid in her arms. In the end, she gave him a little kiss on his cheeks.

Rhoades initially introduced her baby boy as “Milo” only, without revealing his middle or last name.

In addition, in the next slide, another fan had asked for her son’s nationality. Rhoades once again didn’t hesitate to answer the question and wrote that he is of mixed nationality.

In the above-mentioned Instagram Q&A, one fan asked Rhoades what Milo’s birthing process was and praised her as “queen.”

Answering that question, she first mentioned that the birthing process was insane, she was induced, and the whole process took 20 hours. “I went about 19 of those hours with no pain intervention and then had epidural after my water broke from the Pitocin,” she added.

As she continued, she disclosed that when it was time to push, Milo wouldn’t come out, and “his heart rate kept dropping because his cord was wrapped around his neck.” At last, the doctors had to cut her open with scissors and use a vacuum of Milo’s head to take him out.

In the end, Rhoades mentioned that her son was healthy and amazing after he came out.

For a model like Rhoades, fitness and shape are essential. So just eight days after childbirth, she started doing small workouts to lose weight and get back in shape.

Her postpartum journey was also shared via her Instagram handle. On January 11, 2022, she had shared a picture of herself in which she had shown her stomach. “four days postpartum,” she wrote in the caption.

On January 17, she took to her another Instagram handle’s story and asked her followers to ask some questions related to her postpartum and other things. For example, one had asked her for her workout routine, to which she replied that she only started working out at eight days of postpartum.

Similarly, another fan had asked her if she was happy with her postpartum body compared to before pregnancy. In reply, she wrote that she weighed 164 lbs when she went to the hospital for her childbirth.

Following her birth, she lost 15 lbs and has lost 1.5 lbs per day postpartum. She further added that she weighs 136 lbs and has to lose 15 lbs more to regain her “pre-baby” weight.

In the following few stories, she shared some of the food routines she has been following postpartum, such as her breakfast, sugar-free latte, snacks, and dessert.

As for what she is feeding her child, she has shared that she uses donor milk for daytime feeding as she cannot breastfeed yet. For nighttime feeding, she uses HiPP’s organic formula from Europe.