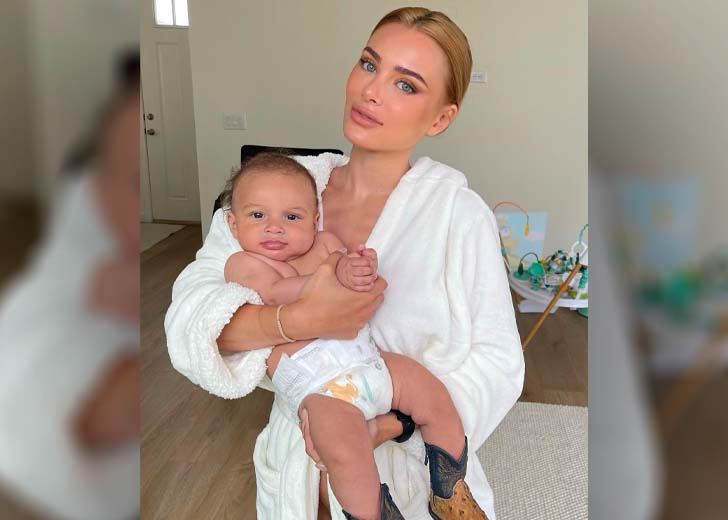 Who is Lana Rhoades’s baby daddy?

Lana Rhoades, a former adult film star and podcaster, startled the world last year when she revealed that she was expecting a child. She uploaded a picture of a sonogram next to some flowers on Instagram on June 1, 2021, but the post has since been archived.

“This is the announcement,” was the post’s caption. She gave birth to her son Milo on January 7, 2022, and since then, her fans and followers have been curious about her personal life.

First, Rhoades did not reveal if she was in a relationship with anyone. And second, she has never mentioned the name of her baby daddy.

Rhoades does not frequently share details about her personal life, and none of the remaining posts on her page feature anyone she refers to as a boyfriend. So who is the father of her child, and what is the baby daddy name?

Even though Rhoades has not mentioned anything about Milo’s father, fans have come up with a few names about who could be her Baby Daddy.

Many people believe that novelist and podcast presenter Mike Majlak, maybe the father of Lana’s kid. The two often were the topic of discussion on Logan Paul’s podcast, Impaulsive, in which Majlak is a co-host.

After a couple of years of Lana and Mike’s relationship being on and off, they appeared to part ways permanently in February 2021. Majlak explained in Impaulsive that they decided to break up because they were constantly bickering, and it was wearing on them both.

After Rhoades announced her pregnancy, many thought that Majlak was the father. This is because he was the last known boyfriend of the former adult star.

Majlak immediately observed his followers enquiring as to his paternity. He then tweeted a deleted tweet on Twitter seeking to be a guest on the Maury program.

He wrote, “Does anyone have a contact at the Maury show? No big deal” However, he later clarified that he is not the father on the Impaulsive podcast.

Rhoades revealed on the June 7, 2021, episode of her podcast 3 Girls 1 Kitchen how a particular Brooklyn Nets basketball player asked her out on a date. Although she did not expressly address Kevin Durant by name, she suggested that the player in the issue is a Libra.

And according to reports, Durant is the only Libra in the group. Rhoades called him “boring” and said he wasn’t “spicy enough” for her taste. As a result, she didn’t appreciate this individual or the date in general.

Numerous internet followers have speculated that Durant may be the baby daddy based on the timing of this day being revealed with her pregnancy announcement.

Neither Rhoades nor Durant have not addressed the story, and it seems like a bit of a stretch given the unimpressive manner Rhoades described their meeting.

Griffin being the baby daddy is a pure presumption based on the fact that he is an NBA player and looks a little like Milo. The speculation started after Rhoades and Milo went Sneaker shopping with Cool Kicks.

However, neither Rhoades nor Griffin has responded to the rumors.

Rhoades is adamant about keeping her baby daddy’s identity a secret. T e model was questioned in May 2022 on Bradley Martyn’s Raw Talk podcast about why she hadn’t revealed the father of her child.

Rhoades candidly explained her reasons for keeping the identity of her son’s father anonymous. R odes said she was willing to talk about the issue in general but had always preferred keeping her private partner’s identity a secret.

She went so far as to say that she decided to honor her son’s father by keeping his identity a secret. To avoid the spotlight, her baby daddy also requested that she carry out his request for him.

So, it seems like we won’t know the identity of Rhoades’ baby daddy any time soon.