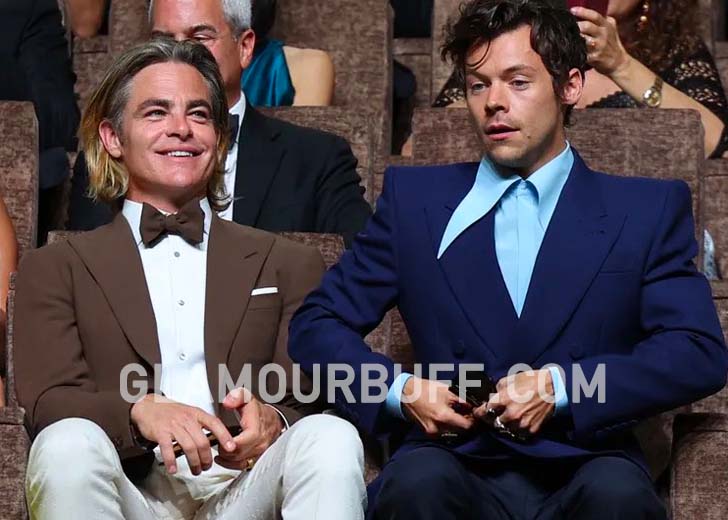 The upcoming Don’t Worry Darling movie has been fueled with a lot of drama.

From director Oliva Wilde lying about firing Shia LeBoeuf to lead actress Florence Pugh refusing to promote the movie and having an alleged beef with the director —  there is a lot of drama surrounding the film.

Moreover, the movie’s world premiere at the 79th Venice International Film Festival on September 5, 2022, was a hot mess. Pugh did not attend the press conference, Harry Styles did not give proper answers (which later turned out to be a meme), and Chris Pine was frankly dissociating.

Similarly, there seemed to be a rift between Styles and his girlfriend, and Pugh seemingly refused to make eye contact with Wilde. The entire premiere was made fun of, and to make matters worse, the movie did not get good reviews.

However, the most talked about instance was when Styles allegedly spit on Pine while sitting down to watch the movie. It became a topic of interest for many people and was trending on Twitter for hours.

There is a lot of drama surrounding the Don’t Worry Darling cast and crew, including the question, “Did Harry Styles spit on Chris Pine?” (Source: Twitter)

So what is the truth? Did styles actually spit on Pine, or was it just an illusion?

As said before, the video of Styles allegedly spitting on Pine went viral on social media. In the video, Wilde and Pine have already taken their seats and are clapping for Styles.

Before Styles sat down, he turned towards Pine while lowering his seat. During that time, he seemingly puckered his mouth.

At the same time, Pine stops clapping, looks down, and smiles slowly. Before the stars could respond, the netizens took it upon themselves to judge.

From slowing down the video to watching it frame by frame, the internet detectives tried to figure out the question that was haunting them —  Did Harry Styles spit on Chris Pine?

A spokeswoman for Pine responded to the feud rumors surrounding the actor and his Don’t Worry Darling co-star in an exclusive statement to PEOPLE. They said it was completely fabricated and an unusual web illusion that was deceptive and allowed dumb conjecture.

They said, “Just to be clear, Harry Styles did not spit on Chris Pine.” They added that the two stars had nothing but respect for one another.

At last, they clarified that any suggestion otherwise was a shameless effort to manufacture drama that did not exist.

Before Styles responded to the drama, sources close to him told The Guardian, “This is not true.”

The singer is currently on tour in the USA. He had managed his dates according to the 79th Venice International Film Festival so that he could go to Venice for the movie premiere.

However, he did not stay in the city for long and is now back on stage. On September 7, 2022, he had the Madison Square Garden concert, performing for the eighth time.

Before starting his concert, he addressed his allegations of spitting on Pine. Styles joked about the situation in the videos clicked by his fans and followers.

So, according to Styles’ sarcastic response, it seems like he is still on good terms with Pine.