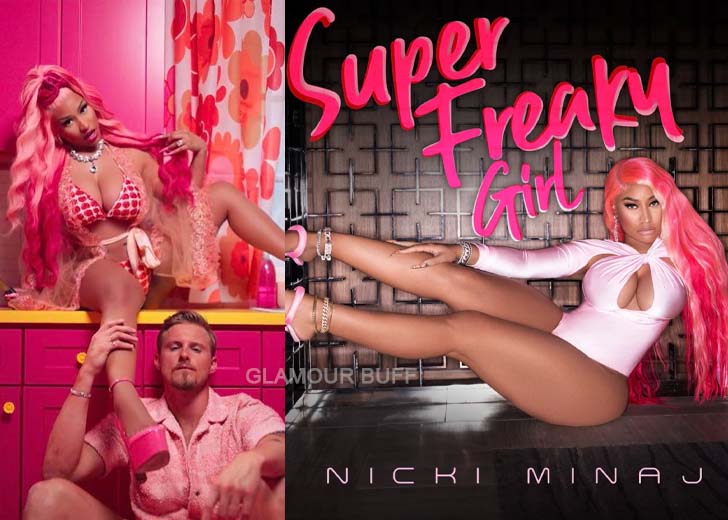 Alexander Ludwig is momentarily shifting from big to mobile screens as he will appear in the music video for Nicki Minaj‘s latest single, ‘Super Freaky Girl.’

A little over eight hours ago, on Friday, August 19, 2022, the Trinidadian-born rapper took to her social media handles to share a 15-second-long teaser for her upcoming ‘Super Freaky Girl’ music video.

The teaser opened with Ludwig and Minaj and heavily featured them afterward. Most parts of the teaser had a pink and yellow backdrop and highlighted knives and scissors as the lyrics “F-R-E, A-K. F-R-E, A-K” played in the background.

Similarly, in one of the scenes, Ludwig and Minaj were apparently seen behaving romantically. And in another scene, Minaj was nearside a kitchen sink while The Hunger Games actor sat below her on the ground floor.

“#DropATear. COMING [SOON],” Minaj captioned the teaser on her Twitter post. As of now, the release date for the official music video is yet to be announced.

When Minaj shared the teaser on her TikTok handle, Ludwig went down on the comment section to say that he was lucky to be a part of the music video. “Still not sure how this happened [laughing emoji]. Nicki, you crushed it as always,” wrote the Vikings star.

The internet had the same type of reaction when they found out that Ludwig was in the music video of Super Freaky Girl. For instance, one Twitter user wrote, “I just CAN’T process this. Alexander Ludwig AND NICKI MINAJ ON A MUSIC VIDEO? OH MY [expletive] GOD, WHAT A TIME TO BE ALIVE.”

“Nicki Minaj put Alexander Ludwig, who played Bjorn Ironside from Vikings in Super Freaky Girl music video, and she thinks I won’t sell everything I own for THIS!” another user tweeted.

Similarly, one Twitter user said, “Alexander Ludwig in that Nicki video is sending me off,” as Ludwig went from playing a fierce warrior in Vikings to Ken from Barbie.

On the other hand, some Twitteratis were in disbelief as they never thought Ludwig would star in one of Minaj’s music videos. One even wrote, “Alexander Ludwig wouldn’t even make my top 50 guesses of actors I think would star in a Nicki Minaj mv, but here we are.”

“Nicki and Alexander Ludwig together wasn’t on my bingo card,” tweeted another Twitterati.

Well, believe it or not, Lugwig is now starring in Minaj’s music video for ‘Super Freaky Girl.’ The song was officially released over a week ago, on August 12, 2022.

Posted on August 23, 2022August 23, 2022
Brianna Chickenfry was rumored with Noah Beck after they appeared together at Bryce Hall's birthday party.
Read More