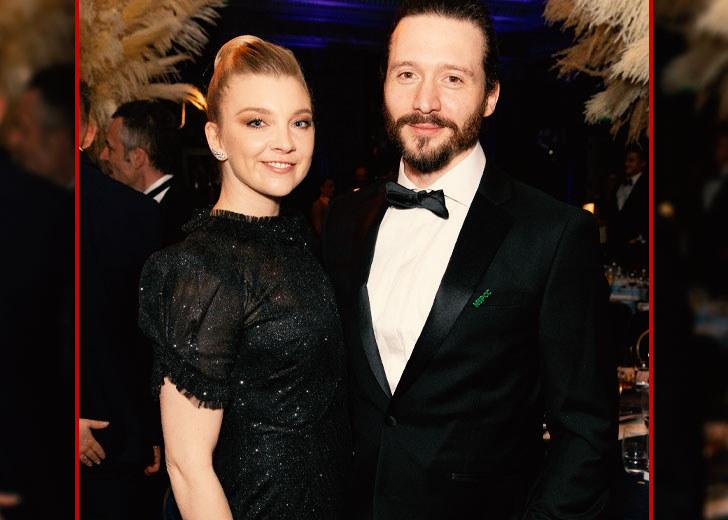 Natalie Dormer is probably best known for portraying Margaery Tyrell in the hit HBO television show Game of Thrones. Besides that, she gained fame for her performance in The Tudors, Captain America: The First Avenger, The Hunger Games: Mockingjay film series, and Penny Dreadful: City of Angels.

To say, she has achieved a flourishing career in the entertainment industry, which is as good as her personal life. The English actress has been in a romantic relationship with her longtime boyfriend, David Oakes.

The couple first met each other in 2019 when they worked together in the West End play Venus in Fur. They got to know each other and eventually began dating. Since then, they have been inseparable.

However, as both are very private over their lives – including their love life – both don’t talk much about it. Besides, Dormer doesn’t even have a social media handle – Instagram or Twitter – and while Oakes does have them, he doesn’t give out much on his personal life.

Who is Natalie Dormer’s boyfriend?

Like Dormer, her boyfriend, Oakes, is a fellow English actor with 26 acting credits to his IMDb profile.

He made his acting debut in 1991 in the movie titled Shuttlecock. After that, he took a huge break from acting and made his return in 2008 with a small role in the TV mini-series, Bonekickers.

Some of his known works from 2008 to 2018 include Walter’s War, The Pillars of the Earth, The Borgias, Truth or Die, The White Queen, Love by Design, The Living and the Dead, Cold Skin, and Studniówk@.

Similarly, from 2019 to 2021, he appeared in movies and TV shows such as Victoria, The Garden of Evening Mists, You, and Shuttlecock.

As of now, he is all set for his upcoming role in the Netflix series Vikings: Valhalla. In it, he portrays one of the lead roles of Earl Godwin. Additionally, he has one film lined up, The Giaour — currently in pre-production.

Born in 1983 in Hampshire, England, Oakes is presently 38 years of age. He celebrates his birthday every year on October 14. His birth name is Rowan David Oakes.

His father’s name is Jeremy Charles Oakes, and his mother’s name is Fiona Brockhurst (née Cunningham). While his father is a Church of England canon, his mother is a professional musician. Furthermore, he stands at a towering height of 6 feet 0½ inches (1.84 meters).

Natalie Dormer and David Oakes are parents of one

The Penny Dreadful: City of Angels actress and her boyfriend are a happy couple. Apart from that, they are also parents to an adorable baby girl whose name isn’t disclosed yet.

In January 2021, the couple of almost two years welcomed their first child together. However, all the details of Dormer’s pregnancy and childbirth were kept private due to their privacy.

Dormer only revealed that she had become a mother to a daughter in late April 2021, when she appeared on the That’s After Life! podcast. She had jokingly said that getting pregnant and having a baby is a perfect thing to do during a pandemic.

Her words were, “It’s the perfect thing to do during a pandemic, is get pregnant and have a baby.” The actress then added, “I feel like I’m probably being a bit of a cliche. She [her daughter] will probably be sitting in a bar in 30 years’ time… going, ‘Yeah, I’m a COVID baby!'”

“I think there’s going to be lots of COVID babies, because what else could people do?” Dormer continued.

As she went on, she mentioned that although her daughter is only three months old, she is an absolute joy. “I’m never going to complain about shooting hours ever again because sleep deprivation is something else,” she added.

The 40-year-old actress also said, “People say, ‘Your whole perspective on life will change, and your whole set of value system…’ and you sort of roll your eyes and go, ‘Yeah, yeah…’ – and then you have one (baby) and you go, ‘Oh, wow!'”

Concluding her shocking news of having a baby, she stated that she will be returning to the entertainment industry soon enough but will initially accept theater roles only so that she will remain in London alongside her family.

“I’m going to find it very difficult, I think. You don’t want to warp the childhood experience. People in the industry that I’m in do lean on nannies and they do that for a reason, so that they can take children with them.”

“But, I mean for me, this is the perfect time to go back to the stage, because then I could be with her all day. But with COVID, who knows when that will happen,” Dormer concluded.

Natalie Dormer with her boyfriend, David Oakes, at the after party of ‘Venus In Fur’ (Photo: David M. Benett/Dave Benett/Getty Images)

As of this date, Dormer and Oaker have kept all the details of their daughter upto themselves only. They are yet to reveal their child’s name and share her pictures.

Before dating her present boyfriend, Dormer was engaged to her longtime director fiancé, Anthony Byrne.

The former couple first met each other on the sets of the show The Tudors. They eventually began dating in 2007.

Four years later, in 2011, they got engaged while on a boat in India. Revealing how Byrne proposed to her, Dormer told The Independent, “We were on a lake in the middle of nowhere… He’ll probably kill me actually; he’s very private.”

Since then, the engaged duo was always together and kept everything low-key. It even looked like they would get married sometime in the near future. However, that didn’t seem to be the case as they parted ways in November 2018.

The news of their split was first reported by New Statesman, who interviewed the actress. The outlet mentioned that the two parted ways after promoting the thriller film In Darkness – which they co-wrote – that summer.