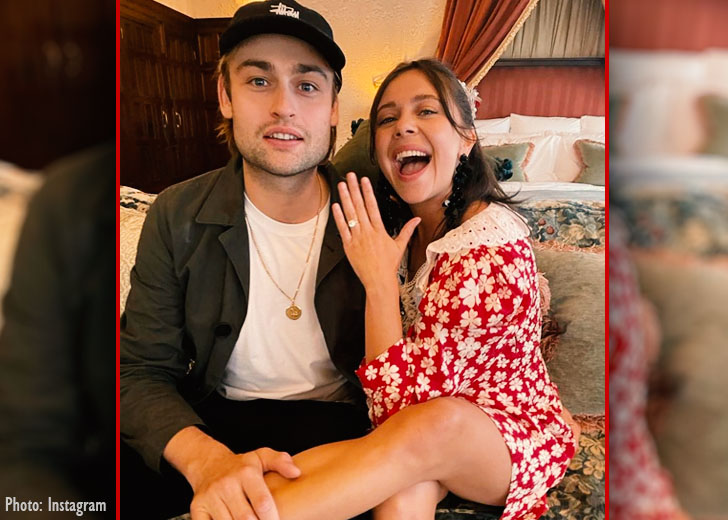 Douglas Booth is a talented English actor who first tasted the limelight in 2010 after playing the role of George in his debut television film, Worried About the Boy.

Afterward, he appeared in several known movies and TV shows such as The Pillars of the Earth, Great Expectations, LOL, Romeo and Juliet, Mary Shelley, The Dirt, and My Salinger Year.

Soon, Booth will make his appearance as Jamie in the movie Unwelcome — expected to release on October 28, 2022. The horror film is his first since 2020, followed by a couple of films and a TV show.

Now that his professional life is summed up in brief, let’s have a look at his personal life. Does Douglas Booth have a wife? Or a girlfriend? Let’s find out!

Douglas Booth is engaged to his girlfriend

As of his writing, Booth is a happily engaged man. He has been engaged to his longtime girlfriend Bel Powley – a fellow English actress – since mid-2021.

Although they weren’t each other’s love interest in the film, they had a quick connection and eventually began dating. In an interview with Browns Fashion Magazine, Powley was asked if she and Booth met on the sets of Mary Shelley.

In reply, she affirmed and said, “Yeah, in 2016. He was playing Percy Shelley and Elle Fanning was playing Mary; I played Claire Clairmont, Mary’s stepsister. That’s when we fell in love – ahhh!”

Since then, the couple has always been together. But, they keep pretty much most of the details of their relationship upto themselves only as they prefer privacy.

Nonetheless, it’s reported that Booth doesn’t like spending much time away from his partner. There is a quote mentioned – from one of his interviews – in the personal quotes section of his IMDb profile.

The line was about how an actor has to spend several months away — for the filming — from their friends and loved ones. “But it’s not like working a 9-5 job and only having two or three weeks off a year.”

After being together for around five years, the actor deemed it perfect for taking his relationship with his girlfriend to another stage. On July 3, 2021, Booth announced via Instagram that he asked Powley to marry him, and she said yes — they got engaged.

He had shared a series of pictures. The first picture was a selfie of him alongside his now-future wife, in which Powley was flaunting her engagement ring. The other two pictures showed that he proposed to her during a romantic picnic in Primrose Hill, London.

Powley also announced the good news via her respective Instagram handle by sharing some cute snaps with her to-be-husband. Referring to the England National Football team’s win over Ukraine in the Euro 2020 quarter-final, she captioned her post as:

“Football’s coming home…and so is my husband.” The caption was followed by football and flag emojis and ring emojis.

Are Douglas Booth and Bel Powley still together?

The engaged couple is still together as of this writing. There have been no reports of Booth and Powley breaking their engagement and walking down separate paths.

As mentioned earlier, the two prefer privacy. Due to that, they don’t post much about each other on their respective social media handles.

Now that it’s confirmed that they are still together, is there any news on them sharing the wedding vows anytime soon? Currently, there has been no such news. The couple might have some amazing wedding plans, but they haven’t shared anything.

Only time will tell when and where Booth and Powley will walk down the aisle and become a husband and wife duo. Till then, their fans have no other option but to wait.

Before Booth was in a relationship with his girlfriend turned fiance, Powley, he was rumored to be in several relationships with some renowned people.

While announcing the actor’s engagement news with Powley, DailyMail gave a little insight into Booth’s relationship history. The outlet reported that he was once linked to Prince Harry’s ex-girlfriend Cressida Bonas in 2016.

Similarly, they mentioned that his other renowned potential partner was his LOL co-star Miley Cyrus. Furthermore, he was reportedly in a relationship with two of his former co-stars: Vanessa Kirby (2012 to 2013) and Ellie Bamber (2015).