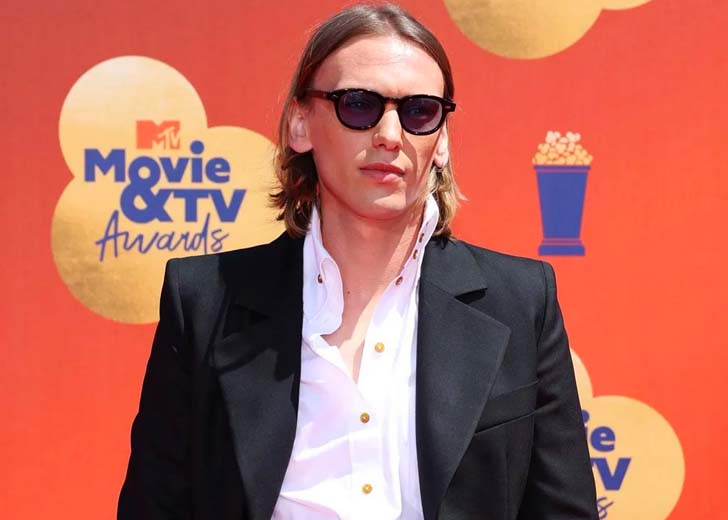 Jamie Campbell Bower is a talented English actor and singer who is presently making headlines for his amazing performance in the first part of Stranger Things season 4. In the Netflix original show, he plays the role of Friendly Orderly / Number One / Vecna / Henry Creel.

However, this isn’t the first time that the actor has been a part of a world-renowned franchise. Bower has previously been in the Harry Potter franchise, having played Young Gellert Grindelwald in Harry Potter and the Deathly Hallows: Part 1 and Fantastic Beasts: The Crimes of Grindelwald.

In addition, he has been a part of the Twilight Saga movies. He has portrayed the role of Caius in 2011’s The Twilight Saga: Breaking Dawn – Part 1 and reprised the same role in Part 2 which came out in 2012.

Although a short career in terms of his number of acting gigs, Bower has earned massive fame all thanks to his skills. So, there is no denying that he has an uprising yet flourishing acting career.

Who is Jamie Campbell Bower dating?

Aside from a fruitful acting career, the 33-year-old Bower also has a blissful personal life with his present girlfriend, despite having setbacks in his previous relationships.

As of this writing, the actor is in a romantic relationship with his girlfriend named Ruby Quilter. Speaking more of Quilter, she is a talented tattoo artist, around 29 years of age, who has been working in the inking field since she was 21, per her 2018 interview with Things & Ink.

As per reports, Bower and Quilter met each other in the latter part of 2018 in the London-based Sang Bleu Tattoo shop. After some time, they eventually started dating and have been together since.

The couple went public with their romance in November 2018, when Quilter accompanied Bower at the premiere of Fantastic Beasts: The Crimes Of Grindelwald in London. However, as the two prefer privacy, they haven’t shed much light on their relationship.

They have occasionally featured each other on their social media handles. As of now, the pair is still going strong as they continue their togetherness while also keeping everything low-key.

Years before he started dating his present girlfriend, Bower was engaged to be married to his co-star Bonnie Wright. The former duo first met each other when they shared the screen on Harry Potter and the Deathly Hallows: Part 1.

Their professional friendship eventually turned into a romantic relationship, a thing that was kept a secret until the 2010 BAFTAs. During the event, Wright officially confirmed she was dating Bower and said, “Yes, we’re dating. We’ve been seeing each other for a few months; it’s good.”

Over a year after going public, on April 10, 2011, Bower revealed his engagement to Wright in his interview with The Daily. He said, “I am engaged. I’m very happy. It’s a wonderful, wonderful time.”

However, the wedding never came as Bower and Wright called off their engagement in July 2012. At the time, an insider told US Weekly, “Bonnie and Jamie split a while ago. It was amicable, but things had not been going right for some time. It’s sad.”

As of now, Wright is happily married to her longtime boyfriend turned husband Andrew Lococo.

Jamie Campbell Bower’s off and on relationship with Lily Collins

Shortly after his split with Wright, Bower moved on and started dating Emily in Paris star Lily Collins.

The now-former pair first met while working together on their movie The Mortals Instruments: City of Bones, and eventually started dating. However, days before their movie hit the theaters, the two parted ways in July 2013.

Though separated, they remained friends and were present during the premiere of their movie in Los Angeles. At the premiere, Bower told E! News, “We’re tight. Lily and I are very, very close. Very close. Always have been, always will be.”

Almost two years after they went down separate roads, Bower and Collins reunited in May 2015. The actress had even shared a picture with Bower via Instagram in which she was kissing him. “Life works in mysterious ways….,” she captioned her post.

Their reunion seemed well initially but little did anyone know they weren’t staying together forever. By the end of 2015, Bower and Collins had once again broken up.

After their short-lived reunion, many weren’t thinking that reconciliation between them would happen again. But, to people’s shock, that did happen as the twp got back together for the second time in January 2018.

Unfortunately, the second reunion lasted even shorter than the first one as they split for good in July 2018. At the time, DailyMail reported that their breakup was amicable.

Among them, the first one was with fashion designer Zoe Graham. They began their relationship in 2007 and were caught having PDA-filled moments on several occasions. But, in late 2009, the two parted ways due to unknown reasons.

After that, Bower began dating Spanish model Zina Charkoplia. Their relationship started in 2013 — during Bower’s on-and-off relationship with Collins. However, their romance didn’t last long as they eventually parted ways.

Following Bower’s split with Charkoplia, the actor started dating runway model Matilda Lowther in March 2014 — they had met while working together in Burberry’s Brit-tastic campaign.

In October 2014, the couple looked synced up as they showed up at the BAFTA Breakthrough Brits 2014 party. But, sometime later, they seemingly parted ways due to unknown reasons.

After that, Bower got back together with Collins, but when he and Collins again broke up, Bower reconciled his relationship with Lowther in March 2016. Their reunion was proved when they were seen together at the Maid’s Gala Night in London.

Bower and Lowther’s reconciled relationship lasted for more than a year as they ended things for good in November 2017.

Things to Check before Calling Customer Support for Internet Speed