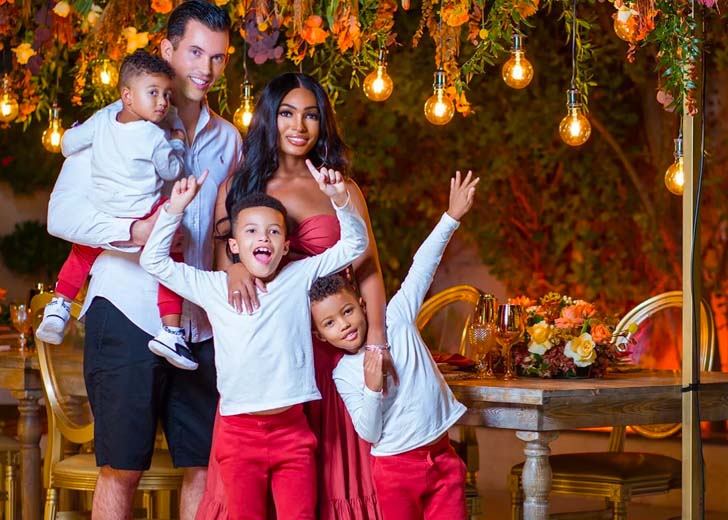 Lesa Milan met her future husband while she was going through a heartbreak.

In the show, we got to see several housewives such as Lesa Milan, Dr. Sara Al Madani, Chanel Ayan, Nina Ali, Caroline Brooks, and Caroline Stanbury. Among all of them, many viewers are intrigued to learn more about Lesa Milan.

And while Milan has gained fame as a successful fashion designer and owner of a brand whose product is used by big Hollywood celebrities, her personal life has made quite the talk. So, here is a look at it!

Who is Lesa Milan married to?

Milan is presently in a blissful marital relationship with her longtime boyfriend turned husband Richard Hall.

Speaking more of her spouse, Gulf News has described him as a Dubai-based entrepreneur who specializes in value-based sales training in order to educate other companies on how to gain new customers.

It’s also reported that Hall is a finance officer and property developer who has expertized himself in different areas of investment and financial services. He has been in the offshore financial services industry for around a decade.

Similarly, he is the president of a rapidly growing boutique investment advisory firm which was founded in 2010. The firm is presently based in London – its headquarter is also there. Thanks to all of his works, he reportedly has an estimated net worth of $50 million.

Born in 1980, Hall was raised in the suburbs of the United Kingdom. The Englishman celebrates his birthday every year on August 21, making him 41 years of age as of this writing. Furthermore, it’s said that he completed his graduation from Wellsway School in 1996.

Milan’s journey to find true love started when she was only 15. And before she met her present husband, Hall, she had dated multiple men, ranging from a high school sweetheart to an oil tycoon, as she described in her blog.

Milan also mentioned that she was looking for commitment and none of her former relationships worked out. She wrote that things didn’t work out and she often found herself in relationships that were “lonely, abusive and toxic.”

Fast forward to August 2012, Milan was once again heartbroken after her relationship with her unnamed boyfriend didn’t work out — and they broke up. At the time, she was in Miami where she was majoring in journalism and minoring in fashion at Florida Atlantic University.

Seeing her heartbroken condition, her friends invited her to LIV on a girls’ night. And although she didn’t want to go, she ultimately decided to and it turned out to be the greatest night of her life as she went on to meet her future husband.

She agreed as she didn’t want to eat leftover pizza, and all of them spent the whole day together. At the end of the day, their conversation led them to go to the Bahamas, which was only 25 minutes away on the flight. They went there and spent two days.

After that, Hall returned to Dubai and Milan admitted herself to therapy to heal and grow from her past relationship traumas. Milan and Hall were maintaining conversation and she would occasionally go visit him in Dubai — but they were yet to officially date.

Five months after knowing each other, Milan was starting to feel safe with Hall. Around the same time, Hall invited Milan over to his house in the UK to spend Christmas with his family. She went there and had a lovely time.

By that time, they were maintaining a long-distance relationship. But, as Milan pointed out in her blog, she never felt the necessity to fact check Hall or had the feeling that he was being unfaithful towards her.

On Christmas Day, 2013, Hall went down on his knees and proposed to Milan at the same place where they first met — on the beach of the Fontainebleau. And on January 4, 2014, the couple shared the wedding vows in front of family and friends.

Since then, the couple has never been apart and they have always supported each other no matter how tough the conditions have been. Milan could often be seen flaunting multiple pictures alongside her husband via her social media handles.

Lesa Milan and Richard Hall are parents to three children

Since their marriage, Milan and Hall have not only become a great couple but also caring parents to their three kids — who are all boys.

Lesa Milan and her husband, Richard Hall, with their children in Abu Dhabi (Photo: Instagram)

By the time the couple was married, they were already expecting their first child together. On June 27, 2014, Milan and Hall welcomed a son named Maximillian Hall. The birth of their first baby brought immense joy to the family.

All of Milan and Hall’s sons are sound and healthy, and the parents of three have done well to raise them. As of now, the family of five resides in Dubai.

Is Kaylee Bryant Dating? Her Partner and Coming Out Story Discussed

Posted on June 28, 2022June 28, 2022
Sandra Smith and her husband John Conolly have been together for almost two decades.
Read More