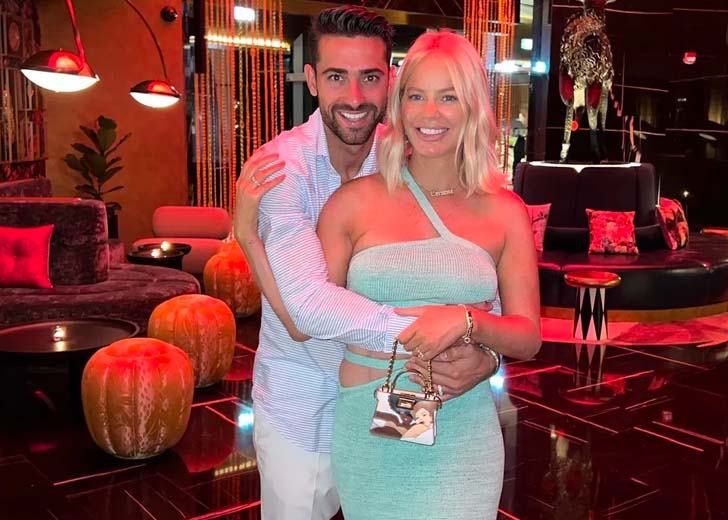 Caroline Stanbury is a London-born television personality who is making her way into The Real Housewives of Dubai, aka RHOD. This isn’t her first appearance in a reality TV show as she has also appeared in Bravo’s Ladies of London and Million Dollar Listing Los Angeles.

The Bravo show will follow the lives of Stanbury and several other cast members just like any other Real Housewives show. Among the many things that fans are excited to see, one is Stanbury’s personal life.

If you are a football or soccer fan, then you must already know Sergio Carrallo. The Spanish national is best known for his playing time at one of the biggest Spanish football clubs, Real Madrid.

Speaking of Stanbury and Carrallo, the now-married couple met sometime around 2020, but it’s undisclosed when and how they first met. Nonetheless, one thing about their first meeting is known — Carrallo faked his real age to go on a date with Stanbury.

In his November 2020 interview with DailyMail, the former football player said, “I said I was 31, because I knew she wouldn’t talk to me otherwise.”

As for why Carrallo lied about his age, it’s easy to say; he is presently 27 and Stanbury is presently 46 years of age — making Carrallo 19 years younger than his wife. Due to the huge age difference, Stanbury has received some backlash as well, including from her RHODubai castmates Chanel Ayan and Lesa Milan.

Nonetheless, it doesn’t seem to affect their relationship at all. Stanbury recently addressed the backlash and told Page Six, “I think it’s really sad that people think a young guy can’t fall in love with an older woman, that it has to be fake and it has to be something else.”

“I think I’m quite hot! People will see that he really, really, really loves me. If anything, he’s guilty of loving me a little too much,” she added.

Coming back to Stanbury and Carrallo’s relationship, the couple went public via Instagram in the summer of 2020. And in early January 2021, Carrallo proposed to his girlfriend during their New Year trip to Nepal.

Caroline Stanbury with her husband, Sergio Carrallo, during their Dubai wedding (Photo: Instagram)

Months later, in November 2021, they got legally married in Mauritius. And one month later, they had their real wedding in Dubai with family, friends, and others in attendance. Their wedding in Dubai came just sometime after UAE changed its laws for interfaith marriages — Stanbury is Jewish and Carrallo is Catholic.

Since their marriage, the couple has been relishing every time in Dubai and going by their Instagram posts, they seem very happy. Furthermore, Stanbury and Carrallo have recently bought their first house together.

Before Stanbury got to know her present husband and married him, she was in a marital relationship with a financier named Cem Habib.

The formerly married couple reportedly met each other in 2002 and started dating around the same time. After being together for around two years, they shared the wedding vows sometime in 2004.

Since then, they were always together and supported each other throughout the years. Their togetherness became stronger after welcoming three children: Yasmine Habib, Zac Habib, and Aaron Habib.

Their marriage was also shown during Stanbury’s stint in Bravo’s Ladies of London and everything seemed to be going well. However, troubles in their marriage seemingly started in the late 2010s.

They ultimately decided to part ways and their divorce was finalized in 2019. The reality TV star had also taken to her Instagram handle to announce her split with her now-former husband. She shared a picture with him and wrote;

“After 17 years, filled with joy, adventures, ups and downs, Cem and I came to the conclusion some time ago that we will continue our relationship not as husband and wife but as good friends and parents to our wonderful 3 children we love very much.”

“We wish each other all the happiness and look forward to maintaining our strong family unit,” she concluded. And as they promised, it seems like they have been doing well in co-parenting their three kids.