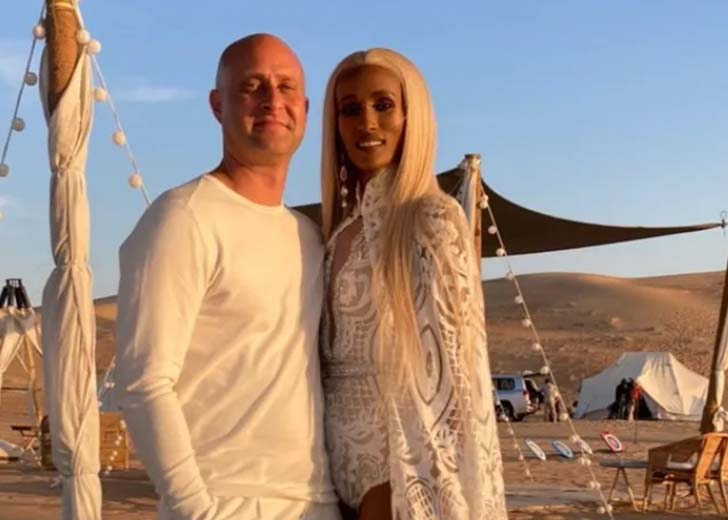 Chanel Ayan, who is a model and an actress, is one of the most recognizable faces on the internet. She throws in an aura and essence packed with confidence and grace.

Not only is she an independent woman, but she is also an enthusiast who ensures to utilize every possible aspect of life. Moreover, she is a loving wife and a woman indulged in motherhood.

While savoring the flavors of success, this dexterous lady also did not let her personal life lose its balance. To this date, she is rejoicing in her life alongside a supportive husband and kids of course.

Who is Chanel Ayan married to?

One of the fresh faces of The Real Housewives of Dubai, Ayan, has been sharing moments of life alongside her husband for over twenty-two years already.

Ayan ensures to not bring up her personal life much into the limelight so the resources are quite unsure regarding the information related to her husband. Many of the sources claimed initially that the model was married to a guy named Luca Salvas.

But, all of those turned out to be false when Ayan publicly talked about her husband, Chris. On the other hand, Salvas was just a friend and was suspected to be her husband before.

The reality star and her husband Chris first met during Ayan’s campaigns and photoshoots in Brazil. And Ayan’s sister was the one who introduced Chris to her.

The model was just 17 at the time. It was not love at first sight but the couple eventually fell in love with each other.

They started meeting often, went on a few dates, fell in love, got married, and now here they are while marking so many years of togetherness.

Recently, while speaking with Andy Cohen, the diva’s husband revealed that it wasn’t just Ayan’s sparkling personality, magnetic smile, and dance moves that won over him in the romance department.

Chris jokingly agreed that his wife’s “boobs” sealed the deal for him, saying, “That’s actually true.” Even Ayan, who was present during the conversation, added, “I showed him the same day we met.”

Moreover, the joyous couple is also blessed with a son named Taj. Following the footsteps of his mother, Taj has his feet into modeling and is labeled as a model, too.

While filling the palettes of her personal life with so much gaiety, she has also ensured to shine in her career. This model is an exemplary person who has been breaking the stereotypes for years.

She bags a huge sum and paves the path to success in every aspect she chooses to be at.

How much is Chanel Ayan’s net worth?

Ayan is recognized as Dubai’s first-ever supermodel. Over the eighteen years, she has established herself in one of the most luxurious cities.

To this date, the model has been the face of several cover shoots and magazines. Her faces have also graced the paths of Chanel, Dior, Tiffany, Cartier, Valentino, Louis Vitton, Amato Couture, and Dolce &  Gabanna.

Apart from modeling, she has also started her entrepreneurial journey as she runs a talent agency. Moreover, she has also established her brand of makeup and skincare AYAN by Toni Malt Makeup.

With these many efforts, hardships, and work put together, the model holds a hefty net worth of $1 million. She is an icon for a reason.