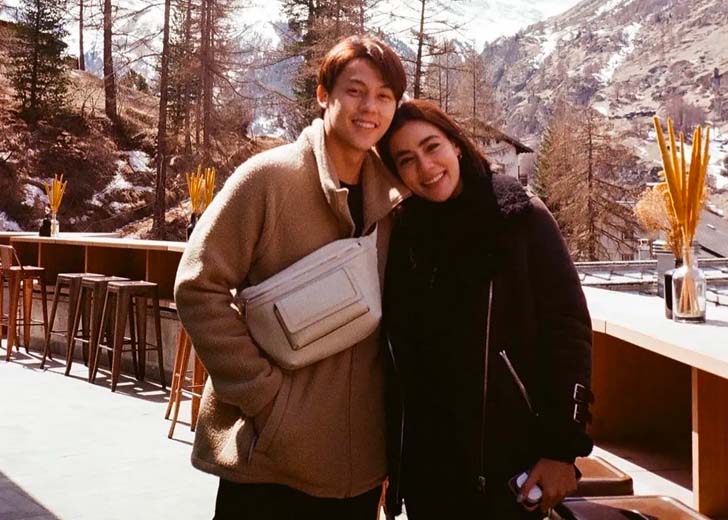 Theirs is the reel to a real love story!

Mark Prin and his longtime girlfriend Kimberley Woltemas broke the internet with the news of their engagement in April 2022. Fans were stunned by this sudden news.

2022 was probably going tough for many. But the power couple came up with the astounding piece of information, as the best friends to lovers trope descended into reality after almost nine years of togetherness.

How did Mark Prin and Kimberley Woltemas start?

In 2010, Prin and Woltemas met for the very first time when they were working on multiple projects, including the dramas Thara Himalaya and Duang Jai Akkanee.

They again met in 2011 while working in the popular drama, Noom Nuer Tong. The following year, they paired up for the series Punya Chon Kon Kura.

During those years, they became really good friends, who enjoyed working together. Again, in 2013, they again met to start their new project together.

This time, their friendship transformed into a relationship. They started dating soon after and the audience fell totally in love with the new couple.

By 2015, their relationship had gotten really popular. The so-in-love couple got into each other even more after they worked for Secret Love Online.

Hence, the reel to real-life partners was not only garnering love and attention for their on-screen performance but was also quite popular for their off-screen romance.

Any of the events they marked their presence at, they would be quenched with questions regarding their engagement, wedding, and whatnot.

In one of the interviews in 2018, Prin answered the most anticipated questions with, “Ho! please calm down! I’m not in a rush. Talking to her more about the wedding? We talk about it more but it’s not next year. As I tell before, we want to work and save money first. We will get married when we get ready for it.”

Over a decade after knowing each other, Prin surprised the couple’s fans with one of the most awaited news. On April 20, 2022, the Thai actor, whose real name is Prin Suparat, took to Instagram to announce that he and his longtime girlfriend Woltemas had gotten engaged.

He shared the big news by uploading a sweet picture of the couple. He also wrote, “We’ve decided on forever. That was right. We got ready for this.”

Woltemas, on the other hand, wrote, “I said yes to my best friend.” These cute glimpses would grasp the heart of any.

Nine-year-long relationship and still ongoing with a bond as such are rare for this generation. They are the power couple for a reason.

Now after this, fans are waiting for the grand wedding of the soon-to-be wife and husband. We will keep you updated as soon as the news breaks off the internet.

Things to Check before Calling Customer Support for Internet Speed