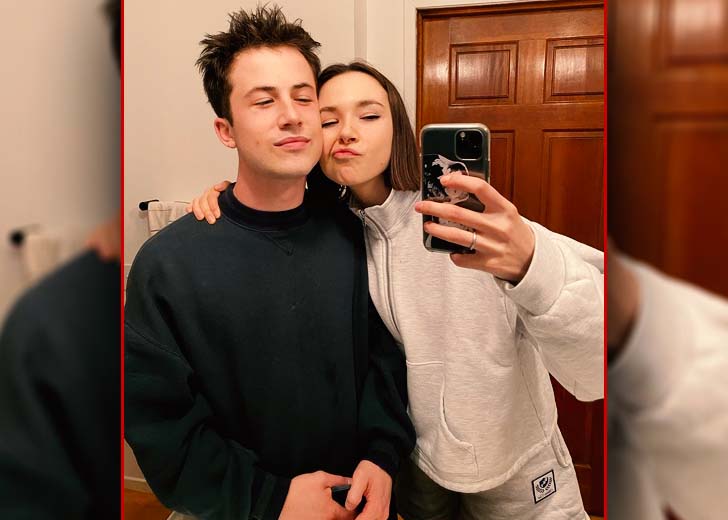 Dylan Minnette is an American actor who gained the most limelight for his portrayal of Clay Jensen in the hit Netflix series titled 13 Reasons Why. He played the role from 2017 to 2020 and appeared in 49 episodes in total.

While he has a flourishing career in the entertainment industry, he also relishes a happy personal life. He has been in a relationship with his girlfriend Lydia Night for a while now.

Who Is Lydia Night?

Minnette’s present girlfriend is a renowned personality on her own who has been working as a lead singer and songwriter for her band called The Regrettes.

Performing alongside her are Genessa Gariano on the guitar, Brooke Dickson in the bass, and Drew Thomsen in the drums. The band acclaimed huge limelight in 2019 following the release of their LP titled How Do You Love?.

Speaking more of Night only, she has been interested in being a musician since childhood. She has been touring and performing in live shows since she was 12 years of age. Reportedly, she used to be a part of bands like Pretty Little Demons and LILA.

Born in 2000, she is the daughter of the award-winning director and producer named Morgan Higby Night. She celebrates her birthday on the 13th of October every year — she is four years younger than her boyfriend, who was born on December 29, 1996.

The first time Minnette and Night sparked dating rumors were in early October 2018, when they were caught having a PDA moment at Knott’s Scary Farm.

“The two held hands and at one point Dylan was rubbing her back. They exchanged a couple of kisses outside one of the mazes,” a source told E! News.

Some days later, on the occasion of his partner’s birthday, October 13, 2018, the actor took to his Instagram handle and wished her with a simple caption of “happy bday @lydianight :).”

Following the dating speculations, the couple was seen multiple times at different places, hanging out and enjoying each other’s company. And though neither of them has officially confirmed their relationship, the pictures they post of each other on social media are evident enough to prove it.

As mentioned above, neither Minnette nor Night are holding back to share their cute couple moments on their respective Instagram handles.

For instance, on Christmas Day, December 25, 2021, Night shared a cute picture alongside Minnette in which they were very close. The actor seemed to be hiding his face with his hands, but his tagged Instagram handle gave it all away.

Similarly, on the occasion of the actor’s 25th birthday, December 29, 2021, the musician posted a series of adorable snaps captured alongside her boyfriend. In the last picture, the two were seen sharing a kiss.

She wrote a beautiful caption that read, “happy birthday to the most incredible, beautiful, and freakin perfect partner in crime… I feel so honored to get to spend another birthday by your side kissing ur face off. i love you forever dyl <3.”

Soon after the post was made, Minnette took to the comment section and wrote, “I love you,” with three red hearts with arrow emojis attached.

Most recently, on January 12, 2022, the actor took to his Instagram handle to share two snaps. One of those two snaps was of his girlfriend posing beside an art of her and Minnette — Minnette was holding it.

Going by all of that, it sure seems like the duo is relishing the best of days with each other by their side.

Before being in a relationship with his present beau, The Mentalist actor was dating his former co-star named Kerris Dorsey.

The former duo first met each other while filming the 2014 movie Alexander and the Terrible, Horrible, No Good, Very Bad Day. Although they played the roles of brother and sister in the movie, they went on to be a couple off-screen.

While they were dating, they looked inseparable, appearing together in several red carpet events and flaunting pictures alongside each other on social media.

However, it seems they weren’t meant to be together forever. By early 2018, their appearance on each other’s social media feed was less and less. Later, reports came that they had parted ways.