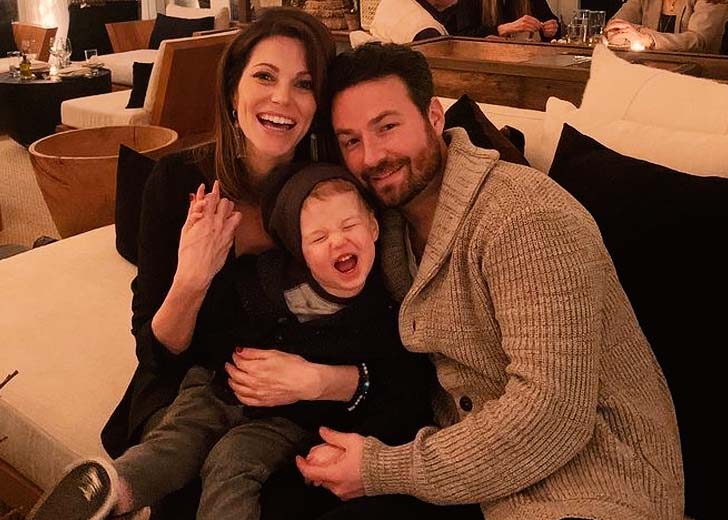 Courtney Henggeler is a talented American actress who gained the most limelight for her portrayal of Amanda LaRusso in the hit Netflix series titled Cobra Kai (2018-21).

Her character is one of the main characters on the show who is married to Daniel LaRusso, played by actor Ralph Macchio. She is a devoted wife and mother of two children: Samantha and Anthony LaRusso.

While the actress is a wife and a mother on-screen, does she relish the same lifestyle off-screen, too? Read on to find out everything about her personal life!

Is Courtney Henggeler Married to a Husband?

Much like her on-screen life, Henggeler also relishes the same kind of lifestyle off the screen. She is a married woman who walked down the aisle with her actor husband, Ross Kohn, over 6 years ago.

The Big Bang Theory actress and her husband first met each other around the early 2010s. As they got to know each other better, they eventually began dating.

After being in a relationship for a while, Kohn decided it was time to take a further step. On August 29, 2014, Henggeler had just landed in New York and he called her to Madison Square Park to have some taco.

When she got there, they ate Brussels sprouts. Just when her mouth was filled with the food, her then-boyfriend got down on one knee, took out a ring, and asked her to marry him. She said yes and they got engaged.

Over a year later, on October 10, 2015, they shared the wedding vows in an intimate ceremony held at Bedford Post Inn, New York. Only close friends and family members were there to witness the ceremony.

Since their marriage, Henggeler and Kohn have been relishing some of the best days of their lives, holding each other’s hands and supporting their partner in every circumstance.

Courtney Henggeler and her husband Ross Kohn at their wedding. (Photo: Instagram)

However, as the couple prefers quite the privacy, they tend to keep major happenings of their personal lives upto themselves only. Besides, in recent times, the actress usually hides the face of her husband while sharing pictures alongside him on social media.

Similarly, Kohn has kept his Instagram handle on private mode. Despite their privacy, it could be very well said that their marital life is filled with happiness.

Courtney Henggeler Is a Mother of Two

On November 9, 2016, Henggeler announced she is pregnant with her first child with Kohn. Over two months later, on January 25, 2017, she gave birth to a son named Oscar Noah Kohn.

On January 11, 2019, she announced her second pregnancy, first exclusively via People then through her Instagram handle. On March 1, 2019, the married couple welcomed their second kid, a daughter named Georgie Healy Kohn.

The duo has been doing their very best as the parents of two children. The actress occasionally shares pictures alongside her husband and children. For instance, on 2019’s Father’s Day, she shared a family picture of four and wrote a lovely caption dedicated to the father of her kids.

Who Is Courtney Henggeler’s Husband?

As mentioned earlier, Henggeler’s husband is an actor. However, he has earned more fame for his works as a producer.

Born in 1981, he was raised in the suburbs of the United States. He celebrates his birthday on the 14th of August every year. In 2021, he turned 40 years of age, and on that occasion, his wife wished him via Instagram and wrote a caption filled with humor.

How to Choose an Exchange for Options Trading in the UK?