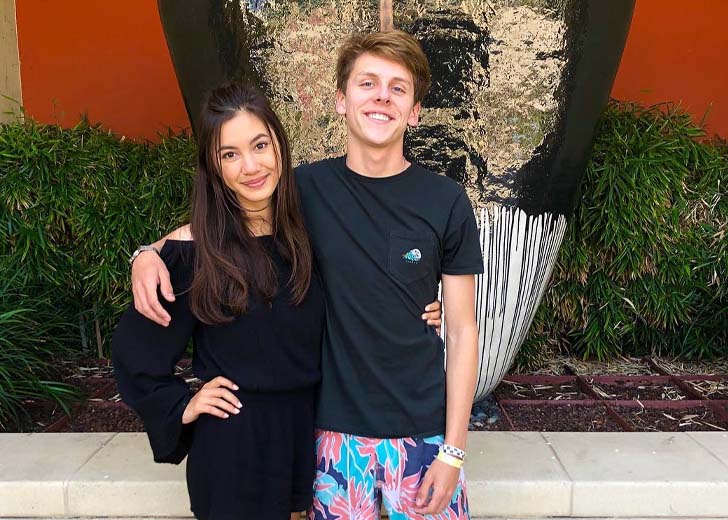 American actor Jacob Bertrand has soared to fame thanks to his portrayal of the spiked hair and angry fighting natured character Eli ‘Hawk’ Moskowitz in the Netflix hit action-fiction show Cobra Kai (2018-21).

Despite his anger and fighting spirit on-screen, he is very much the opposite off-screen. In addition, he has been in a romantic relationship for years now, and his girlfriend is always there to keep him centered.

Bertrand’s girlfriend’s name is Serena Pullen, whom he has been dating for over five years now.

It’s presently undisclosed how and when they first met each other. Nonetheless, the couple reportedly began dating in 2016, and they celebrate their dating anniversary on July 24 every year.

Over the years, the two seem to have bonded very well. The actor has usually shared several pictures alongside his partner via his Instagram handle. For instance, on their dating anniversary, July 24, 2018, he posted some snaps from their trip to Newport Beach, California.

Similarly, around two days after Pullen’s birthday, May 6, 2019, he shared some pictures from when they were in the Philippines. In the caption, he wrote, “Happy birthmonth (Serena made me put that) to my love. Thanks for loving me. Every version, red hair, blue, pink, bleached, and brown. Love ya.”

In another instance, on September 28, 2019, it seems like he missed his beau very much, so much so that he ended up posting a few pictures of her via Instagram and wrote, “Missin my love” on the caption.

Bertrand and Pullen are still together, and their relationship is still going on; however, they have been keeping most of the details upto themselves.

Before this relationship, there were no reports of the actor being in a relationship and having either a girlfriend or a wife.

Rumors of Jacob Bertrand and Serena Pullen’s Break Up

After late 2019, Bertrand stopped sharing pictures alongside his girlfriend, and as the period lasted longer, people began to speculate that he might have broken up with Pullen.

However, none of the rumors are true as the duo are still together. It seems like they only stopped publicizing their relationship. Maybe, that’s why Pullen has privatized her Instagram handle.

Additionally, Bertrand has been less active on social media than he used to be and only shares pictures related to his profession or with his co-stars.

Another proof of the two being together is the podcast — Lone Lobos with Xolo Mariduena and Jacob Bertrand — that the actor and his Cobra Kai co-star Xolo Mariduena run together.

On the October 12, 2021, episode of the podcast, titled The Neighbors Know Our Name, the two co-stars initially talked about different sensational Netflix shows, including the recent hit show Squid Game.

While talking about Squid Game, Bertrand said that he and his girlfriend were watching the show, and Pullen suddenly said that actress HoYeon Jung – played as Kang Sae-byeok – was pretty.

He continued, “That’s the thing I will say. If I’m watching something, I will never volunteer my opinion of thinking a girl is pretty on a show. I will wait for her [Pullen] to say, ‘Wow, that girl is beautiful’ and then it’s like okay, it’s safe to say yes, I agree that girl is quite cute.”

The two friends also talked about how Bertrand mimicked Pullen’s voice once when they were in Atlanta, Georgia, and how that made Pullen angry though Mariduena found it as “the funniest thing ever.”

Considering all of that, it’s safe to say that Bertrand and Pullen are still an item but are keeping things low-key.

Who Is Jacob Bertrand’s Girlfriend?

As of this writing, there isn’t much information available on Bertrand’s girlfriend, Serena Pullen.

There is an IMDb profile of her name in which she has two credits as an actress and another two as a composer. Besides that, her other details remain a mystery.