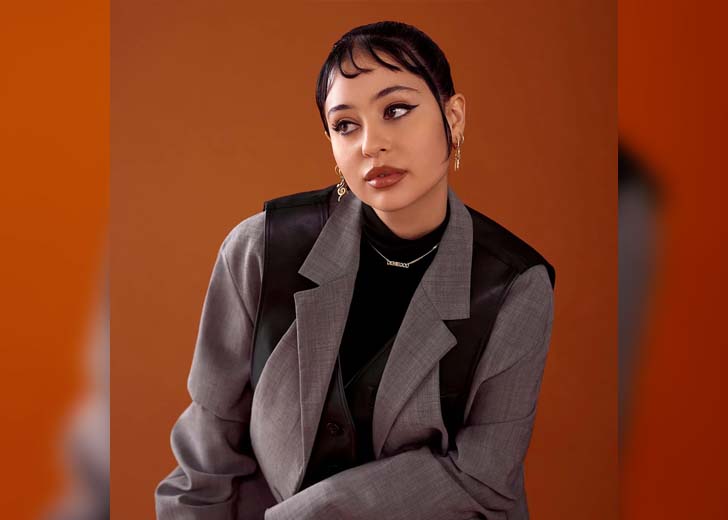 Alexa Demie is an American actress who first tasted the limelight after portraying the role of Estee in the 2018 movie Mid90s. Her popularity was boosted when she played in 2019’s Waves as Alexis.

However, none of that gave her the spotlight that the HBO series Euphoria (2019-22) provided her. In the critically acclaimed drama series, she plays the role of Maddy Perez. She has also reprised her role in the second season, which premiered on January 9, 2022.

Following her rise to fame, many wanted to know more about her and were quite invested in her personal life as the actress has kept it behind the curtains.

Who Is Alexa Demie Dating?

The Los Angeles, California native is presently in a long-term relationship with her singer-songwriter boyfriend Christian Berishaj, popularly known as JMSN.

Demie and her partner have been dating each other for years now. One of Demie’s since-deleted Instagram posts hints they have been together since early 2017. But, it’s unconfirmed as the couple keeps everything low-key.

But, they haven’t always been able to hide their togetherness. On October 5, 2020, Just Jared released several pictures of the two having a great time on a beach in Miami, Florida.

The outlet reported that the pictures were taken a day ago, on October 4. The duo was having fun swimming in the ocean and running back to the shores. The actress had worn a purple bikini and had left her hair open on several occasions.

On the other hand, Berishaj had only worn a black shorts and showed off his chest filled with several tattoos.

Although Just Jared’s news release confirmed their togetherness, it made the couple super-private of their outings. They deleted all the pictures that they shared of each other from their social media handles too.

After that instance, there seems to be no further instance of the two being seen in public. As a result, some might have thought that they possibly broke up.

Fortunately, that’s not the case as they are still together. Demie and Berishaj still follow each other on Instagram. Besides, the actress is one of the only two people that the singer follows on Instagram.

The couple has continued their love story while keeping everything hidden from the outside world. Only time will tell when they will open up about their togetherness in public.

Who Is Alexa Demie’s Boyfriend?

As mentioned earlier, Demie’s boyfriend is a singer-songwriter. The Albanian-American record producer and multi-instrumentalist has earned quite a fame through his profession.

His debut album titled Priscilla was released in 2012, and since then, he has never looked back. After his debut album, he has released five additional albums, 3 EPs, several songs, and music videos.

Born in Dallas, Texas, Berishaj was mostly raised in Eastpointe, Michigan. His parents were immigrants from Albania. Presently, his exact age is hidden; however, reports suggest that he is 33 years of age.

Has Demie been in any relationships in the past before dating her present partner?

As of this writing, there have been no reports of the actress dating someone in the past. Due to that, it’s unknown if she has ex-boyfriend/s or not.

The 5 feet 1-inch tall actress has always kept her love life hidden from the media and the public. Thus, even if she was in a relationship, she has kept those details upto herself only.

Is the 2018 Comedy Drama ‘Blindspotting’ a True Story? Here's an Overview