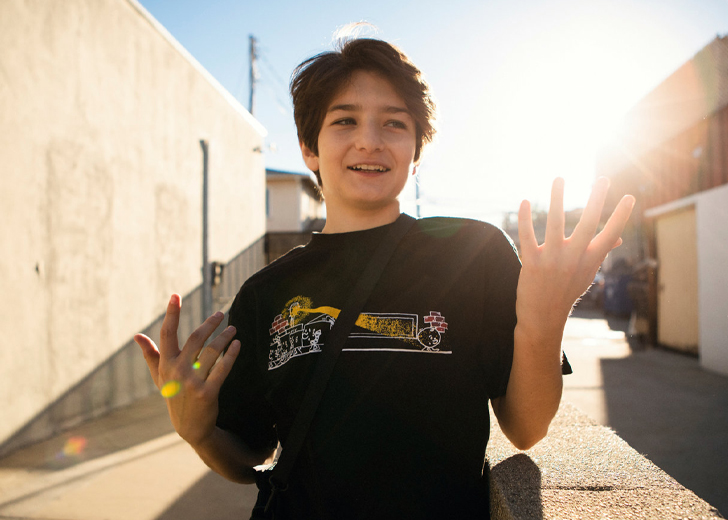 Sunny Suljic is a talented American child actor and skateboarder. He came into the limelight through his acting performance in the 2017 movie titled The Killing of a Sacred Deer. In it, he played the role of Bob Murphy.

For his works in Mid90s, he was nominated for a Critics Choice Award and MCFCA Award. Similarly, his performance as a voice actor in God of War has rewarded him with two award nominations; BAFTA Games Award and NAVGTR Award.

How Old Is Sunny Suljic?

Suljic is 16 years of age, as of this writing. He recently celebrated his 16th birthday on the 10th of August.

Born in the year 2005, the teenage actor was raised in the city of Roswell, Georgia. As per his date of birth, his zodiac sign is Leo.

Coming over to his education, he presently studies at a local private school in Los Angeles, California.

Sunny Suljic’s Mother Was behind His Acting Skills

Suljic has been private about many things regarding his life. Among those, one is his family life. Due to that, little is known about his parents and if has any siblings or not.

However, he did give out some insight on his parents during his 2017 interview with TIFF Originals. In the interview, he mentioned that his parents are great inspirations to him.

Later, in another interview with The Berrics, in 2018, Suljic said that his mother was behind his acting skills. Talking more on the topic, he stated that he used to hate doing auditions and saying monologues, but his mother always used to make scripts for him to learn acting skills.

The skateboarder further credited his mother for his acting success during an interview with Issue Magazine. In it, he mentioned that he wanted to be an actor when he was just five or six years of age.

When he confessed his dream to his mother, she didn’t block his interest and said “Alright, let’s do it.” Afterward, his parents enrolled his name in the International Modeling and Talent Association, a program that seeks talented individuals.

Besides that, he has not given any other details about his parents. Nonetheless, reports from some outlets suggest that he was born to a Russian mother and a Bosnian father.

How Tall Is Sunny Suljic?

As per reports, the North Hollywood star stands at an average height of 5 feet 3 inches or 1.6 meters and weighs around 60 kg or 132 lbs. His other physical attributes include dark brown hair and blue eyes.

How Much Is Sunny Suljic’s Net Worth?

Ever since Suljic made his acting debut through 2013’s short movie Ruined, the child actor has never looked back. He has been regularly appearing on the big screen, either playing a lead or minor role.

Currently, he sits with 13 acting credits on his IMDb profile and it will surely increase more in the future. With such a flourishing career, it must be sure that he has bagged some healthy sum and has made a decent net worth.