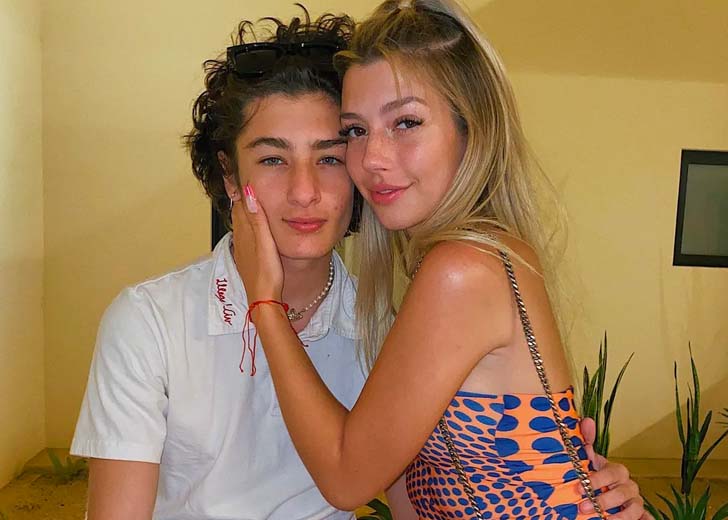 Prior to Sunny, Sissy Sherisan was involved in a relationship with Miles Despair.

She shared a video of herself and Sunny with the caption “happy birthday, love,” and tagged @sunnysulji. Many of their friends and fans wished Suljic a happy birthday after seeing the post.

The actress further shared a series of stories in which she was seen hugging and kissing her boyfriend to wish him a happy birthday. Moreover, they are also seen going to a cafe with their friends, where Suljic is cutting his birthday cake.

Suljic is celebrating his 17th birthday, one year younger than his girlfriend. He announced Sheridan’s age as 18 on Instagram eight weeks ago.

When did Sissy Sheridan and Sunny Suljic start dating?

The exact date Sheridan and Suljic began dating is unknown at the moment, but rumors about them began spreading after her Halloween post. She shared a photo of herself with a boy wearing angelic wings on his backside.

Fans immediately recognized the post and commented that the boy was none other than Suljic. However, neither Suljic nor Sheridan admitted it.

In the post, Sheridan shared an intimate photo of herself in a red dress with Suljic. She made a teasing face while placing her hand on his neck in the image. This picture confirmed that they were dating.

Sunny Suljic is a skateboarder and actor from the United States. He is well-known for his role as Bob in Yorgos Lanthimos’s 2016 drama The Killing of a Sacred Deer.

Similarly, he played Atreus, Kratos’ son, in the 2018 game God of War, for which he received a BAFTA nomination for Best Performance in a Video Game. Suljic made his feature film debut in Jonah Hill’s 2018 release Mid90s.

Aside from that, he is popular on social media platforms. He has over 677K followers on his official Instagram account as of 2022.

Before Suljic, the diva was in a relationship with Miles Despair. Although it is unknown when the couple began dating, it is assumed to have been in the middle of 2020.

In a recently deleted tweet, Sheridan acknowledged their relationship and wished Despair a happy birthday on June 29, 2020.

The couple dated for about a year before calling it quits. However, we don’t know what caused the breakup, but some rumors claim Despair was cheating on her.

Despair was accused of sending suggestive tact messages to minors. One of the victims also admitted to receiving representative photos on Snapchat while still in a relationship with Sheridan.

Later on July 17, 2021, she made it clear on Twitter that she was single and urged her followers to stop assuming things and tagging her with her ex-boyfriend.

Despair, on the other hand, denied all of the allegations and posted a video in which he chastised Sheridan for knowing about the situation while they were dating.

Why Is Music Important In Online Casino Gaming

Posted on August 2, 2022August 19, 2022
Nearly everyone who enjoys playing games in their mobile casinos enjoys music and playing the games.
Read More