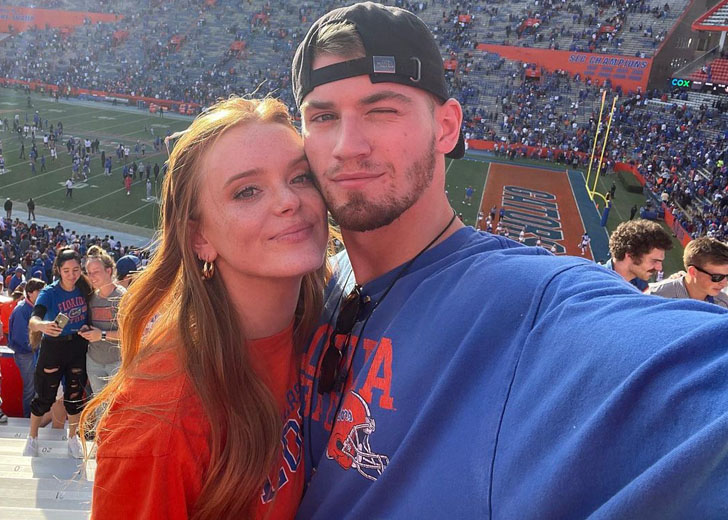 Abigail Cowen and her boyfriend Danny Griffin have been giving their fans major couple goals to ship for.

Ever since the couple made their relationship public, back on October 2, 2021, both of them have been flaunting adorable pictures alongside each other.

Here is a detailed look at the pictures they have posted on their respective Instagram handles, following their dating confirmation.

Less than 10 days after they confirmed their togetherness, on October 8, Cowen had posted a picture of her in which she looked stunning. While her partner was missing in the picture, he didn’t miss out to write a cute caption that read, “Beauty.”

On another occasion, October 11, Griffin had shared a clip and some pictures alongside his girlfriend. “you turn my 6s to 9s,” he had captioned his post.

In the comment section of the post, Cowen first commented three red heart emojis and then went on to comment, “also we need to work on your wave but that’s ok, we have time.”

On November 8, 2021, the Fate: The Winx Saga star took to her Instagram handle to share a selfie in which she looked amazing in a black dress. Not only did her fans think she was looking alluring in the picture, but her boyfriend also thought so.

Later, on November 26, the American actress posted a snap with her beau in which they were sitting in a boat, riding along the lake. There were smiles all around their faces as they hugged each other.

Two days later, the English actor shared some pictures and clips when he and Cowen went to watch the baseball game of the New York Mets. In one of those pictures, Griffin was seen giving his girlfriend a kiss on the cheeks whilst Cowen was leaning on to give her boyfriend a kiss in another picture.

On the very next day, November 29, Cowen posted some pictures and vidoes too, but it was from a different place — she and Griffin had also gone to watch the game of Florida Gators football team.

On December 1st, Cowen had shared a clip of her in which she was having fun by dancing and enjoying the moment. As the caption hinted, it was probably captured by Griffin during one of their outings.

“Omg I had NO idea you were recording. I’m SOoOOo embarrassed. Just a candid girly girl having #fun,” she had captioned the post.

Recently, on Saturday, December 4, the actor shared a short clip in which he was with Cowen on a beach. The actress had her tongue out whilst giving a pose whereas Griffin just smiled.

On the same day, Cowen posted a picture with her partner with a caption, “we’re stranded on an island together NO ONE HELP.” The duo was hugging each other in the picture and it was also taken on the same beach.

Cowen was donning a red bikini whereas Griffin was wearing a black t-shirt and black Nike shorts.

On Sunday, December 5, Griffin again took to his Instagram handle to share a picture from that same location. In that picture, the pair were holding each other’s hands as they took a little stroll alongside the beach.

“Signing off….again,” he went on to caption his post.

Well, going by all of the cute pictures and clips they have been sharing, with the addition to Griffin’s lovely comments on his girlfriend’s posts, there is no denying that the couple has been enjoying each other’s company.