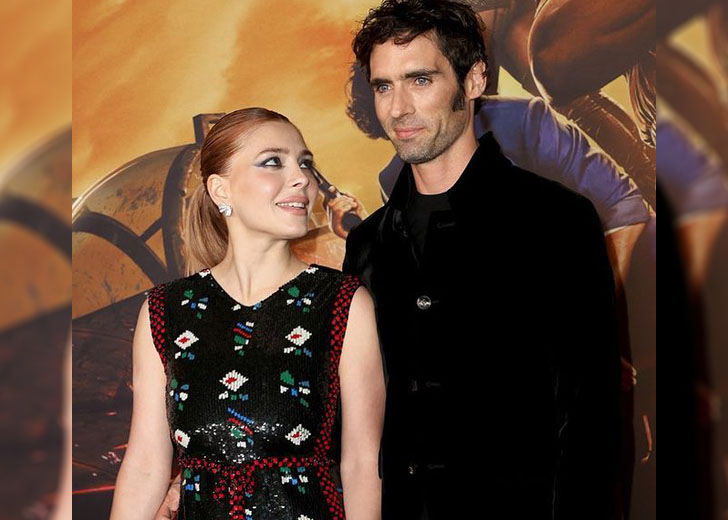 Whilst she relishes a flourishing career in the entertainment industry, her personal life has been no different. She has been married to her longtime husband Tyson Ritter for more than seven years.

Elena Satine and Tyson Ritter’s Relationship: From Engagement to Marriage

While there are no reports of whom Satine dated before making things official with Ritter, there is also the mystery of when she began dating her present partner.

Though the married duo’s dating timeline is fuzzy, they did take a step further in their relationship in April 2013. As Ritter told People, when he went down on his knees, with an engagement ring in his hand, the actress shed some tears.

He had also admitted that he was shaking. “And we were on a roof and no one fell off,” he further added jokingly.

After being engaged for over seven months, they decided to legalize their bond. On December 28, 2013, the American singer tweeted a picture of a marriage application. “Whole-lee-shee-it!” he captioned his tweet.

One day later, he tweeted a picture from his bachelorette party. On the very next day, he made another tweet saying, “Rehearsal Dinner done!! @ElleSatine and I have been working our butts off, and now all we have to do is wake up, and get hitched!”

On 2014’s New Year’s Eve, December 31, 2013, the couple walked down the aisle in a beach wedding. The event held in Seaside, Florida was witnessed by 50 people, consisting of only close friends and family members.

On her special day, the bride donned a country-chic theme gown that included fireworks and wish lanterns — was designed by Inbal Dror.

Speaking of their wedding, the couple told People, “We feel very fortunate to have started the New Year this way. With an abundance of love and happiness together, shared with all of our friends and family.”

Since then, the duo has been relishing their days as a married couple. For instance, on December 27, 2015, the two were caught having a wonderful time at a beach in St. Barts, splashing water and enjoying the sunbath.

Satine looked hot as she donned a black one-piece swimsuit/bikini. Similarly, her husband was wearing striped board shorts which were accompanied by his goggles.

The Couple Has Been Supportive of Each Other’s Profession

Ever since they have been together, Satine and Ritter have been supporting each other in every step of their life, including their professions. Both of them are usually seen accompanying each other at various venues, red carpet events, and so on.

Their show of support for their partner could also be seen through their respective Instagram handles. For instance, on June 15, 2018, Satine shared a picture with her life partner and encouraged her fans to watch her husband’s new AMC show, Preacher.

Just around a month ago, on November 12, 2021, Ritter shared a picture alongside his wife from the premiere of Satine’s new Netflix show Cowboy Bebop, in which he also has a small cameo.

In the caption, he wrote, “It was a lovely night out celebrating my beloved @elle_satine ‘s premiere of @bebopnetflix. So unbelievably proud of her.”

Similarly, on November 23, he posted a poster of Cowboy Bebop in which his wife was the main attraction. “So proud of my gal and the bebop gang. #1 on Netflix today!” he wrote as the caption.

Going by those, it is for sure that the duo has utmost love and respect for each other and they are proud of each other’s professions, too.