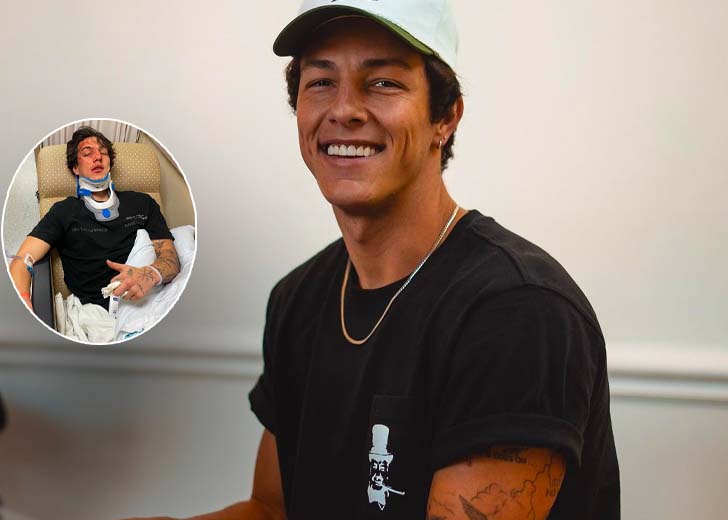 Thanksgiving is a time to be celebrated with friends and family. To do so, Tayler Holder went back to his hometown in Texas.

However, his trip turned out to be an unfortunate event because it landed him in the hospital with a couple of broken bones. The TikToker updated his fans and followers via social media that he was hospitalized following a bike crash accident.

Here is everything we know about the situation.

What happened to Tayler Holder?

As said before, Holder went back to Texas for the holidays. He was eager to see his friends again and spend time with them.

In his Instagram stories, the influencer showed that he and his friends were riding dirtbikes and doing tricks. They displayed their enjoyment by performing some tricks and revving the engines.

In the videos uploaded on Instagram Story, he tagged his friends Cody Ware and Skylar Beaird, and it looked like they were having a blast with Holder.

In an unexpected turn of events, the boys went from laughing to seeing Holder with a bloody nose and mouth. He mumbled, undoubtedly in excruciating pain, “Well, that’s a wrap, guys. I just broke my nose.”

Holder has snot hanging from his nose, but it seems like he is in too much pain to give it a second thought. He uploaded a similar video on his TikTok and said, “Looks like we gotta go to the hospital, guys.”

Then the video transitioned to show him in the hospital with his injury cleaned. There, he is hardly able to talk or move his face.

However, he looked somewhat improved, cleaned up, and appeared to have regained his composure. He addressed his audience, wearing a new neck brace, and said, “We’re at the hospital, guys.”

In another TikTok video, Holder gave an update about his injury to his fans and followers. He revealed that he got into a bike crash and, as a result, broke his nose.

Tayler Holder got into a bike crash accident and was hospitalized for his injury. (Source: Tayler Holder’s IG Stories)

Similarly, he also broke some bones alongside his cheekbones and his ribs. One of his shoulders, on the other hand, was dislocated.

The TikToker said that the doctors were still performing checkups on him, so more might be revealed in the future. He thanked his fans and followers for keeping him in their prayers and hoped to recover soon.

Despite being injured and hospitalized, Holder was joking and keeping his mood light. In the TikTok video, he joked about being happy that his teeth were intact.

On his Instagram stories, he posted a poll asking, “do I still look sexy” while sporting tangled hair, bruises, and a new neck brace as a fashion statement. He also posted another selfie with an obviously broken nose and swollen cheekbones and wrote, “Damn I’m hot.”

Since then, Holder has not given any updates about his situation.

Everything To Know About 'Bachelor In Paradise' Star Brandon Jones