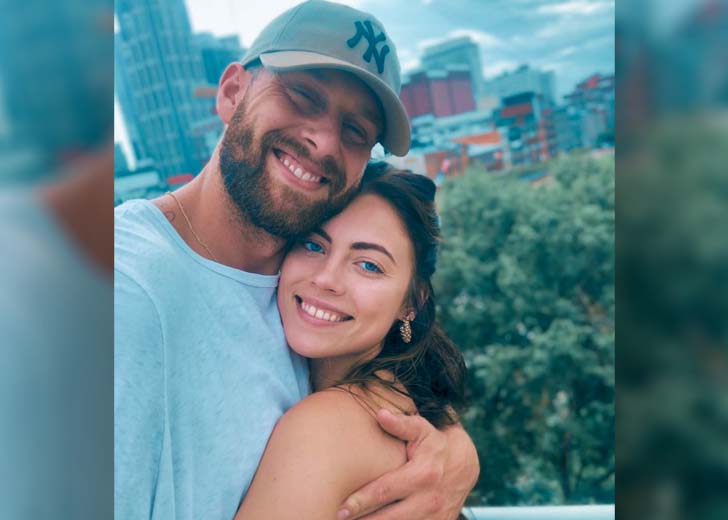 Congrats to the newlywed!

Emily Weisband is a married woman!

The singer-songwriter tied the knot with her husband, Dylan Toscano, in a star-studded wedding ceremony on October 1, 2022. The wedding came after almost a year of being engaged to one another.

Weisband announced her engagement after dating Toscano for a year and a half. She took to Instagram to post a slew of pictures of the pair and wrote, “someone asked me if I felt happy and it’s more than that… I feel peaceful, love love love love you,” with a couple of ring emojis.

Additionally, Toscano announced the news on his Instagram and posted a picture of the proposal, showing him kneeling in front of Weisman. “I asked my best friend to marry me last night. The end,” he wrote.

Even though Weisband and Toscano got married on October 1, 2022, their wedding was reported by People on November 22, 2022.

The celebrity-studded wedding, organized with the aid of Grey Boroff from House of Grey Events, took place at Southern Trace Farms in Franklin, Tennessee.

The singer told People that the couple opted to buy the rings in each other’s hometown. She got hers at American Jewelry in Brentwood and bought his at Ulman’s, a mom-and-pop jewelry shop in her hometown of Fredericksburg, Virginia.

Weisband also chose to don her mother’s 1992 wedding shoes as part of the “something old” custom. Before she walked down the aisle, Toscano gave her an opal necklace as her “something new,” and her grandma donned a blue outfit as the “something blue.”

As a result, the guest took off her diamond bracelet and told Weisband to wear it for the rest of the night. Weisband and Toscano had over 220 guests, which included Little Big Town’s Karen Fairchild,  RaeLynn, Lady A’s Hillary Scott, and Lauren Daigle, among others.

Weisband said that she and her spouse knew they wanted their wedding to feel like a celebration. She said, “We didn’t want to just plug our story into the wedding formula everyone uses, so we leaned into who we are.”

Weisband tied the knot with her husband “at the table.” She explained the reason saying that whenever the pair argue, their love for food shines. They make dinner, sit at the table and throw their disagreements aside.

So, they incorporated this into their wedding. Catered by Juniper Green, their ceremony featured a variety of dishes with fall and Mediterranean/Italian flavor inspiration.

After the ceremony and dinner, Weisband was whisked away to change into a custom Olia Zavozina dress that was ideal for their after-party. The party was an evening of dancing and enjoyment.

At the end of the reception, a handwritten note from the bride, who spent a total of three months writing a special letter to each of her guests, was given to each guest as they left.

Weisband and Toscano wanted to give their guest a unique experience and successfully did so. Weisband said, “It was exciting for everyone to arrive and realize this was going to be a little different than other weddings they’d been to. The energy was electric. When I walked down the aisle, everyone stood and cheered — clapping and whooping and hollering. It felt so joyful from the start!”

After their wedding, Weisband and Toscano went on a honeymoon to New York and Ireland.