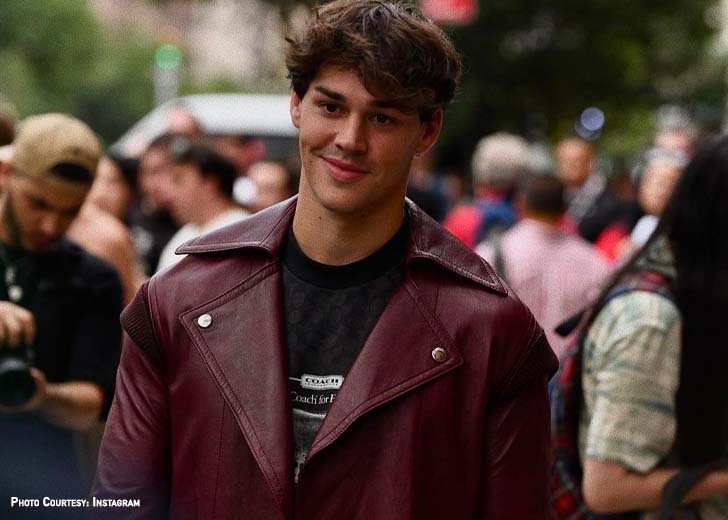 Noah Beck said, “I don’t even know. I’m living alone right now,” when he was asked about his dating life.

Although it’s uncertain whether Noah Beck and Dixie D’Amelio are indeed no longer together, Beck’s Put a Sock in It podcast co-host, Larri “Larray” Merritt, appeared to confirm that Beck is leading a single life during an episode that aired in October 2022.

In a recent episode, Merritt asked, “I mean what are your thoughts on dating? How do you feel?” Beck lashed back to his co-host while both giggled.

The TikTok influencer also explained that he got a new place by himself and felt content at his new home. Then, they continued talking about horror movies and their feelings about Netflix’s Monster: The Jeffrey Dahmer Story.

Although neither Beck nor D’Amelio have officially stated the details of their breakup, it appears that they have been working through the challenging circumstances that led to their separation.

The long-shipping TikTok stars Beck and D’Amelio started dating in early October 2020. Noah confirmed the long-speculated news in an interview with AwesomenessTV’s.

After confirming their relationship, many fans wondered why they took so long to go public. Noah explained to Hollywood Fix that they originally wanted to keep their connection a secret.

The TikTok star also explained in her podcast, Charli and Dixie: 2 Chix, that after reading fans’ comments under pictures of them together, she was hesitant to declare their relationship in public.

Shortly after their relationship announcement, on October 26, 2020, the couple celebrated their one-month anniversary. According to Seventeen, Beck shared a picture with D’Amelio expressing his love for her.

On April 15, 2021, Put a Sock in It host appeared on TikToker’s podcast, Charli and Dixie: 2 Chix, to talk about their relationship and answered their fans’ questions.

Beck took advantage of D’Amelio’s 20th birthday on August 12, 2021, to send his girlfriend a heartfelt message on Instagram. The TikTok celebrity posted a series of previously unseen photos of himself and his girlfriend along with the loveliest caption.

He wrote, “HBD to the girl that makes my world go round. everyone go wish her a happy bday!!”

Beck and D’Amelio have shared some of their finest moments on social media since officially announcing their relationship in October 2020, including traveling the world and enjoying birthdays and anniversaries.

However, the couple decided to take a backseat and spend most of their time away from the spotlight. On Monday, February 14, 2022, Beck spoke to E! News at the Coach presentation during New York Fashion Week to explain why he and the influencer wanted a less public relationship.

you guys know i have endless love for those who support me. that being said, if u are on this journey w me, pls read pic.twitter.com/ZZb3bcwfpw

The social media personality said, “I’ve been telling a lot of people we’re kind of keeping things offline. And since we’ve been doing so, it’s been good. It’s been kind of like a weight off the shoulder in a way,” to the Magazine.

Nonetheless, Beck was not present at D’Amelio’s 21st birthday. With her closest friends, she celebrated the special day in Las Vegas. The singer posted pictures of the fun to her Instagram stories, but Beck was missing.

He took to Twitter and explained that he was busy and work held him back from attending the birthday party in Las Vegas.

On the episode of September 28 of The D’Amelio Show, which is presently streaming on Hulu, D’Amelio surprised the audience by confessing that she and Beck had broken up.

She said, “Noah — I don’t know what’s going on with that,” to her parents, while Beck stated that he and D’Amelio were kind of in a little rough patch.

The social media personality explained that her split with Beck was because she and Beck needed time to think, and that work is her “top priority.”

The episode closed with the singer notifying her parents about her and Beck’s relationship status, but naturally, they have since been spotted together out and about.

The TikTok celebrity told People at a New York Fashion Week event that she and Beck are “more happy” now that they have taken their romance offline. The way this all plays out will have to wait until the show airs the following week.

It appears that the brief separation between the two TikTok celebrities that was discussed on The D’Amelio Show has now become a permanent breakup.

During an episode that aired on October 11, 2022, Merritt, Beck’s co-host of the Put a Sock in It podcast, seemed to confirm that Beck is living alone.

Who Is Matt Biedel Married To? Meet His Wife and Children