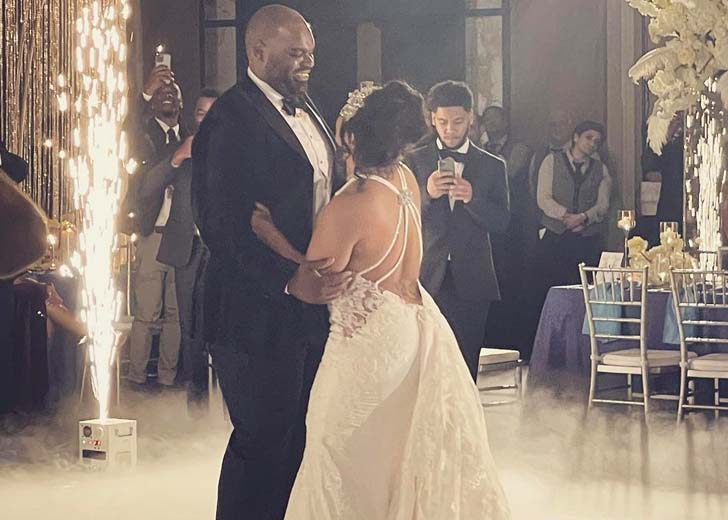 Congratulations to Michael Oher and Tiffany Michelle Roy on their wedding!

Michael Oher is a married man! And the lucky woman is none other than his longtime girlfriend, Tiffany Michelle Roy.

Elliott Events designed their wedding, and it took place at the JW Marriott Nashville in downtown Nashville. The couple shared the wedding vows on November 5, 2022, but the news wasn’t made public for another two days.

On Monday, November 7, 2022, the former NFL star took to his Instagram handle to share a picture alongside his life partner. The photo was from the couple’s wedding ceremony, where they held hands and possibly exchanged their vows. “Thankful!” Oher captioned the post.

Additionally, the Instagram post gave an insight into the newlyweds’ wardrobe. The groom wore a white shirt, a black suit, and a bow tie. On the other hand, the bride looked stunning in a white gown that had scooped neckline, side slit, and lace-up back.

A couple of hours before announcing his wedding, Oher had posted another picture where he was seen alongside six of his close male friends that were invited to his wedding. He used three red heart emojis to caption the post.

Speaking of people invited to the wedding, multiple guests shared glimpses from Oher’s wedding with Roy. And one of them was American author Fred Minnick, who had posted pictures of the bride and groom dancing and walking down the aisle to Ed Sheeran’s ‘Perfect.’

Minnick had also added a sweet caption that read, “Such an awesome night. Congrats to @michaeloher and Tiffany on a beautiful life together. And let me just say what an amazing ceremony and reception. Marriage is a beautiful thing with your soulmate. Cheers!”

Another person who posted clips from the special day was Oher’s niece Janarria Sanford, who posted two clips and one picture. Out of them, only one video featured Oher and his wife in which they and other guests were dancing. “Mr. and Mrs. Oher,” Sanford wrote.

Since the former Baltimore Ravens player announced his marriage, many friends and well-wishers have congratulated the newlyweds, mainly through the comment section. For instance, one user wrote, “Congrats!!!! My Guy, May Your Marriage Be Forever Blessed!”

“Wishing you decades and decades of happiness,” wrote another.

Along with the congratulatory messages in the comment section, some comments were left by some confused fans. For example, one user had written, “Congratulations. But I thought you were already married?”

And the confusion behind this comment is because there have been instances in the past where Oher’s current wife, Tiffany Michelle Roy, has been addressed as his wife, either by media outlets or the couple themselves.

As for when Oher addressed Roy as his wife, it was back in July 2017 when the former NFL player was taken to court for allegedly attacking an Uber driver. As per the driver, Girma Berkessa, Oher had asked to follow a car in which his wife was inside.

Moreover, Roy herself has used the term “wife,” hinting that she has been married to Oher for a while. She used that term in the About section of her clothing brand, The Feminish Collection’s website. “She is also a mother and a wife,” was written there.

And if you are one of those confused people, then there is no need to be, as Oher and Roy weren’t married in the past. But it seems like they used to refer to each other as “husband and wife” even before getting married because of their long-term relationship.

Speaking of their relationship, Oher and Roy first met each other more than 15 years ago at the University of Mississippi when Oher was playing football for the Ole Miss Rebels football team.

Sparks flew, and they eventually began dating sometime around 2007. And since then, they have always been together and supported each other through thick and thin.

As years passed, their bond strengthened. And while they were yet to get married, they did welcome a baby boy. However, as both are very private about their togetherness, they have yet to reveal any details about their son.

With a stable relationship and the arrival of a child in their family, the only remaining thing was the legal certification of their love. Oher and Roy went close to that when they got engaged in July 2022, and now, the love birds are officially married.