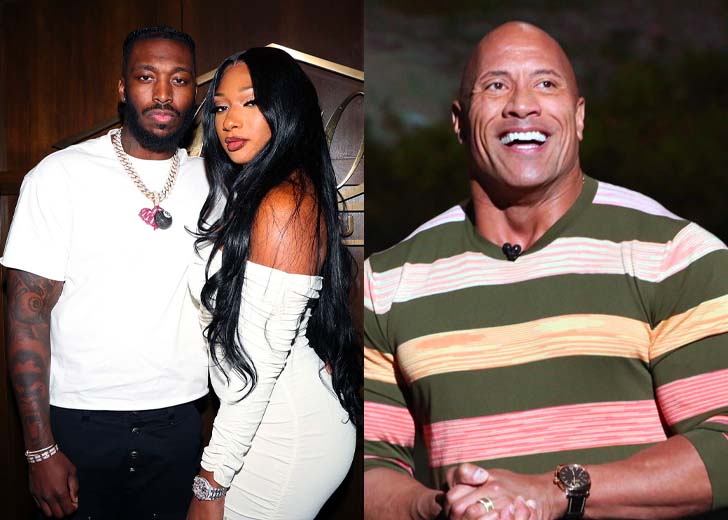 “Of all the things to be worried about y’all think I’m mad at the Rock,” said Pardison Fontaine.

Dwayne Johnson recently paired with co-star Kevin Hart for an interview where the interviewee asked, “What celebrity would you wanna be a pet to?” In response, Johnson, without any hesitation, said, “Megan Thee Stallion.”

The video went viral as soon as it was shared by Johnson on his Instagram. Many fans jumped in to share their opinions on this matter on various social platforms. And now Megan Thee Stallion’s boyfriend Pardison Fontaine has also spoken about this matter.

“Of all the things to be worried about y’all think I’m mad at the Rock,” rapper Fontaine tweeted on August 9, 2022.

He also explained how he deleted an Instagram comment in which he had initially written, “All our dogs named after #s. Just teach your wife to use seasoning…You’ll be iiight…Moana is the shit tho.”

In the next tweet, he said, “The comment started all our dogs #s and ended with Moana is my shit I deleted it (yesterday).. cus it seem like ppl took it wrong .. thought maybe my joke was in poor taste.”

Pardi’s “seasoning” is about The Rock’s White wife, Lauren Hashian, and he starred in the 2016 animated movie Moana. Lauren Hashian is the daughter of Boston drummer Sib Hashain. The couple first met while Johnson was filming The Game Plan in 2006.

Together, they have two beautiful daughters, Jasmine and Tiana. Simone is the eldest daughter of Johnson, who he previously had with now ex-wife Dany Garcia.

The Rock, along with comedian Kevin Hart, was interviewed to promote their new film DC League of Super-Pets, and the interview was uploaded by Johnson on his official Instagram profile on August 7, 2022.

As mentioned, during the interview, the actors were asked several questions, and one of them was, “What celebrity would you wanna be a pet to?” The Rock, without feeling hesitant, replied with the answer, Megan Thee Stallion, as co-star Hart burst into laughter.

The interviewer, in response, said, “Oh, that is a good one,” and further asked, “Why Megan Thee Stallion?” As a reply, he said, “We don’t have to talk about that.”

Before being in a romantic relationship, Pardi and Thee Stallion had a successful working partnership. In February 2021, she confirmed to her fans that she was dating Pardi in an Instagram live chat.

The pair made their first red carpet debut as a couple on May 27 at iHeartRadio Music Awards.

According to Elle, before sharing their relationship status, Thee Stallion told her fans, “I didn’t like what they were trying to say about Pardi.”

A customized dinner menu made by Pardi for Megan The Stallion (Source: Instagram)

Further adding, “Cause he is so calm and so sweet and very protective…That’s my boo and I really like him. I never said hot girls can’t have boyfriends. Yeah, he my boyfriend.”

Thee Stallion shared some of the pictures from last year’s valentines day on her Instagram, which seemed to be extravagant where Pardi treated her to a private jet, and a customized dinner menu titled Pardi With A Hottie.

Is Discovery's 'Expedition Unknown' Canceled? Some FAQs about the Show Answered