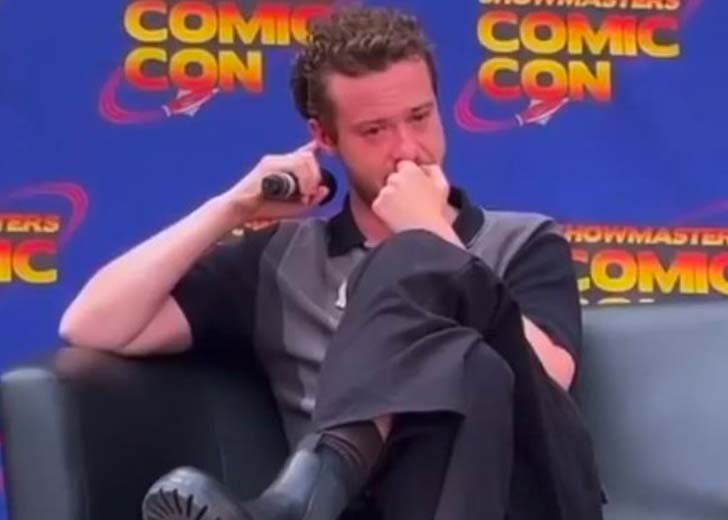 Joseph Quinn was overwhelmed by all the love from his fans.

Joseph Quinn’s performance as the D&D-playing musician Eddie Munson in Stranger Things season 4 has won the heart of millions worldwide.

And the fans’ love for the actor was seen when he arrived at the London Film and Comic Con on July 9, 2022. Besides, the craze was so big that the tickets to meet him were oversold by over 400 tickets. Crazy number, right?

But Quinn didn’t disappoint his fans as he took his time to sign autographs, take pictures, and have a small chat with them. However, that resulted in the Comic Con staffers berating Quinn for taking too much time with the fans.

Despite that, the breakout star continued with the session with his fans while also speeding up things a bit. On the next day, July 10, Quinn sat down at Showmasters Comic Con, where he had small chats with fans.

And when a fangirl named Kimberley praised the actor’s performance as Eddie Munson and for taking his time out to meet everyone the other day, Quinn started crying and wiped his tears using his t-shirt sleeves. And now, the video has become viral all over TikTok and Twitter.

Kimberley started her statement by saying she didn’t have a question but only wanted to express her gratitude. She then mentioned the incident that happened the other day and how the Comic-Con staffers mistreated Quinn.

And while she didn’t comment on the incident, she thanked Quinn on behalf of all the fans for sharing his time. Moments after Kimberley said that the audience erupted in joy as they started clapping and praising the actor.

At this moment, Quinn had already become emotional and moments away from starting to tear up. Kimberley continued her praises for the actor as she now focused on Quinn’s fantastic performance as Eddie Munson and how many people connected with Eddie through reason or another.

“You really made our weekend. And you really make mine as well, like you were just too nice to me and my guide dog yesterday. And however you were treated yesterday, we are so grateful. Thank you,” Kimberley further said as the crowd started applauding again.

As Kimberley was saying these lovely words, Quinn was already tearing up. Later, he started to wipe his tears using his t-shirt sleeves. In the end, he could only utter a couple of words; “aw, why’d you do that. Thanks.”

Many people captured this interaction’s video and shared it on social media platforms like TikTok and Twitter. One particular video on TikTok has already gained more than 4.6 million likes, 47,000 comments, and 64,600 shares.

Similarly, it’s viral on Twitter, where several users have shared the video with a cute message. Kimberley also took to her Twitter and said she sincerely meant every word she said. “We love you, Joseph, and you deserve everything,” she added.

“No, it makes me so happy that Joe Quinn knows how much we love him and also appreciate him for giving us Eddie like he deserves the world for real,” one Twitter user wrote.

Furthermore, another user tweeted, “Joseph Quinn getting emotional because of all the love from fans. GOD, HE’S PERFECT.”

Going by all of these, it’s clear that the fans are in love with Quinn and his portrayal of the misunderstood Eddie Munson. You can also fall in love with him by watching the new season of Stranger Things only on Netflix.