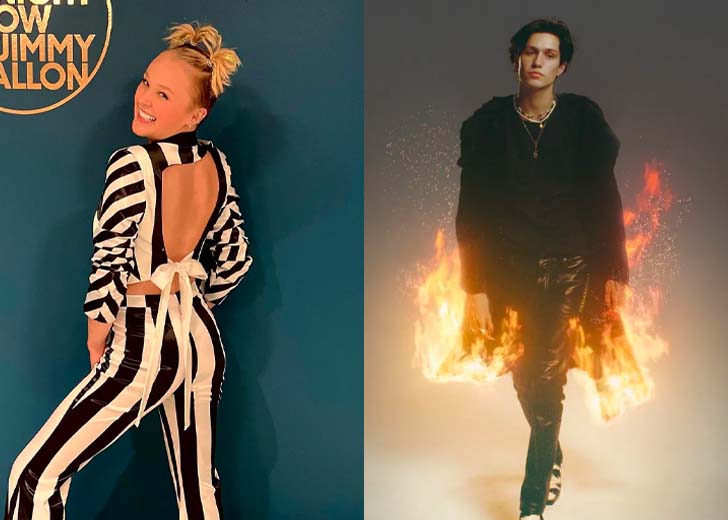 And American dancer JoJo Siwa has just stepped on the drama by taking a dig at the two words that Hudson used in his new and unreleased song ‘All the Things I Hate About You’ — the song is set to be released on Friday, July 29, 2022.

Hudson’s yet-to-be-released song is supposedly a diss at D’Amelio. And in one of the teasers of the song, the rapper recites his line that reads, “You’re a showstopper, a bad liar, homie hopper, drama starter.”

Now what Siwa did was make a video that she posted among her 42.4 million TikTok followers a little over 12 hours ago, on Wednesday, July 27, 2022. Siwa used the small teaser Hudson released from his upcoming song as her background song.

The internet star is also seen lying on her bed while donning one of Doja Cat’s merchandise t-shirts. She then laughingly says, “I have never heard the term ‘Homie Hopper’ before.”

Siwa again bursts into laughter and says, “And it’s just the funniest thing to me.” “Am I alone?” she asks her followers. After that, the 12-second-long short clip ends.

Under the comment section of her TikTok video, many of her followers gave the answers to her last question. One user wrote, “girl, you missed the homie hopper trend… but I did only learn it this year, so you’re probably not alone.”

“WHY DOES GENZ NOT KNOW ANYTHING FROM B4 THEY WERE BORN. That expression has been around since like 1985,” another user added.

“No cause she’s not wrong. I’ve been laughing about those lyrics all day like it was just unexpected asl,” another user commented.

The official poster for Chase Hudson’s new song ‘All the Things I Hate About You’ (Photo: Instagram)

Hudson had teased his new song by releasing a short clip via his TikTok handle on July 24. And now, it’s known that his song is titled ‘All the Things I Hate About You’ and is set to release on July 29. As said earlier, the song is reported as a diss to D’Amelio.

And it became clearer that the song is a diss to D’Amelio when the director of Hudson’s new song, Mooch, posted a picture on his Instagram story on July 27. The image was of him finishing some work on the song on his laptop.

A small picture was seen on the top, probably of some lyrics of Hudson’s song or a part of his music video. And the supposed lyrics read, “Princess turned evil [expletive] seen with bumster after years of loyalty to prince Hudson the second.”

For now, netizens are waiting for the song to be released and listen to what Hudson has to say about his former partner and her new relationship.

5 Tips to Use Hemp for Workout Recovery