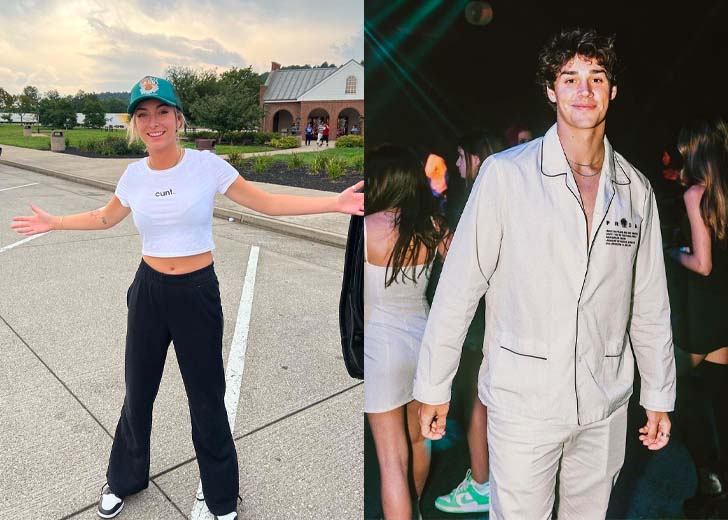 Brianna Chickenfry was rumored with Noah Beck after they appeared together at Bryce Hall’s birthday party.

Noah Beck and Brianna Chickenfry’s dating rumor has become a hot debate among the fans as they were seen with each other all night being smiley and giggly at Bryce Hall‘s birthday party.

Is the TikTok star Beck dating Chickenfry, or is it just another rumor to give fans something to talk about to avoid boredom?

The rumors regarding Chickenfry dating Beck came on August 22, 2022, once again by DeuxMoi, who in the past had assumed about famous personalities dating other renowned individuals. While some of the speculations might be true, most of them are just a fluke.

Recently, DeuxMoi shared the news in the stories section of her official Instagram account, claiming that Beck was all over Chickenfry and was super smiley and giggly at Halls’ birthday party.

However, the news DeuxMoi shared has already been removed as she shared it via her Instagram story. Fortunately, hannahkosh, a TikTok user, created a video using a screenshot of the same post DeuxMoi shared on their Instagram.

Hannahkosh explained briefly in her video regarding the news shared by DeuxMoi. She said in the opening line of the video, “an anonymous message was sent to DeuxMoi.”

The message contained the subject “Noah and brianna chickenfry,” followed by, “I spotted Noah Beck at Bryce halls’ twenty third birthday party this past weekend. I am not sure if him and Dixie are still together??”

Furthermore, the message claimed, “But he was all over Brianna Chickenfry. They were with each other all night and were super smiley and giggly.”

The video soon went viral, and Chickenfry herself responded to the video. She commented on the post, saying, “Totally sounds like something I’d do.”

The fans had a variety of opinions about the comment made by Chickenfry, and some even claimed that she was being sarcastic.

The situation has now become even more confusing for the fans because Hall commented on the TikTok video by hannahkosh with the words “this is true.”

Beck used to date social media star Dixie D’Amelio. But nowadays, they can rarely be seen together on online platforms like Instagram, leading fans to wonder if the pair have broken up.

Additionally, the widespread claims that Beck and Chickenfry are dating gave credence to the possibility that Beck and D’Amelio had broken up.

Even in February, the break-up rumors of the stars spread when she was seen with her ex-boyfriend Griffin Johnson at a party. But Beck’s friend, who was at the same party, assured that it was just a brief conversation.

To address the matter regarding D’Amelio and Johnson, Beck took it to Twitter and claimed, “You know I love you guys more than anything, but let’s stop jumping to conclusions, OK? It’s not [fair] to anyone.”

However, the couple has decided to keep their relationship secret, away from the public. In a recent interview with E! News, she disclosed, “keeping their relationship private is so much better for both of our mental well-being.”

On May 25, D’Amelio also discussed how she and Noah are attempting to keep their relationship a secret during a podcast talk with BFFs. She said, “We’ve decided to fully take our relationship off the internet. And whether we’re together or not is like kind of…if you want information you should watch our Hulu show.”

Speaking about their relationship on season 2 of The D’Amelio Show, D’Amelio spoke exclusively to J-14 and said, “Noah’s on the show, and we talk about everything and get to the real stuff.”

Fans are still confused because the couple isn’t visible together on social networking sites, and they continue to wonder if their love is over.