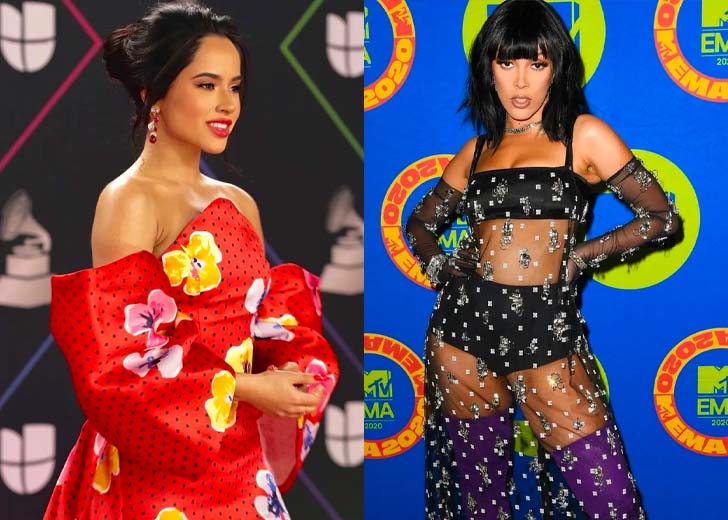 “Doja has always been just so talented,” said Becky G.

Becky G and Doja Cat first met while working on a music video. Since their first meeting, the two seem to have maintained a friendly bond.

And Becky G’s comment about the fellow singer shows that they have mutual respect for each other and their talent. To talk from the start, it all began when Becky filmed the music video for her single ‘Shower.’

The song became a multiplatinum hit, with its music video garnering more than 467 million views on YouTube only as of this writing.

And more recently, Becky talked about Cat’s cameo in her years-old pool party-themed music video during her August 2022 interview with Variety. She said, “It’s one of those like really crazy, unplanned, full-circle moments, which is kind of wild.”

The California native singer then showed some appreciation for Cat by saying, “And [Doja] has always been just so [expletive] talented!”

A couple of months before that interview, in May 2022, Becky and Cat made a memorable moment as they reunited at the 2022 Billboard Music Awards. When pictures of the two together, a collage of old and new, surfaced on the internet, people started calling them “icons.”

Becky G and Doja Cat in ‘Shower’ vs. at the 2022 Billboard Music Awards (Photo: Twitter)

“WAIT, WHAT? How did I not know this,” one Twitter user wrote, while another added, “What, never knew that omg both queens.”

Furthermore, one fan began complimenting the two’s dressing styles. And on the other hand, some were still confused, with one even writing, “You can’t post this without telling us where the first pic is from.”

For those still confused, in the music video for ‘Shower,’ released in 2014, a 19-year-old Doja Cat made a cameo appearance. As for when her cameo comes in the video, it is at the 1-minute and 33 seconds mark, with Cat making moves while sitting behind Becky.

When Pop Crave on Twitter posted a screenshot of Becky and Cat from the music video, netizens started reacting to it. One Twitter user was shocked as they wrote, “wait, wha-,” with another following it up by saying, “OMG, that song is ICONIC. my childhood.”

“Ong what!?! I just watched that song on tv today. Also, Travis Mills was also in that mv,” another wrote while one user made sense of it by saying that both Becky and Cat were clients of American record producer Dr. Luke.

Now that everything’s explained, things might be more straightforward for some confused fans, and they can head to the Shower music video to get some nostalgic vibes.