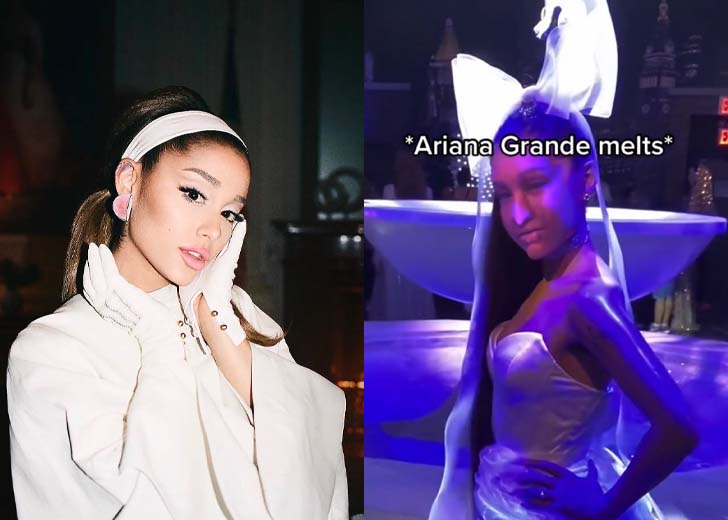 Fans have not liked most of Ariana Grande’s wax figures.

Recently, Ariana Grande’s melted wax figure has been going viral on social media like Twitter. A picture of what appears to be a wax figure of Grande with a melted face is making memes and headlines.

Learn about the news and more about fans’ reactions to old and new Ariana Grande’s wax figures.

The new viral picture of Grande’s reported wax figure of Madame Tussauds wax museum with a melted face has been spreading crazily on Twitter.

The fan pages have shared before and after pictures of the melting of the face side by side with captions like, “The Madame Tussauds wax figure of Ariana Grande melted because of air conditioning problems.”

Some fans commented, “That’s horrifying,” while many just laughed it out.

An air conditioning failure supposedly caused the melting, but any related sources have not confirmed this.

This funny image of Grande’s wax figure has created a debate between fans, and their reactions are hilarious.

Many fans and viewers find the images utterly funny, and some find it sad, while some suggest that this is a new chance for the Museum to redo Grande’s wax figure in a better way.

One of the fans commented, “It’s a good thing, and now they should make a better one.”

The rumor started when a TikTok creator posted a video about the melting of the wax figure. But later, he posted another video explaining how he used VFX to manipulate the image to add the melted effect.

So, the whole melting of Grande’s wax figure could be just a hoax created by a TikTok user.

Not just now, fans didn’t like Grande’s wax figure when it first arrived at the Madame Tussauds wax museum — and they argued that it looked nothing like the pop star.

This was not the only time fans hated their idol’s wax figure. When Madame Tussauds revealed a new Grande figure at their London location in 2019, not all fans were pleased with the singer’s new statue.

Fans reacted to the wax figure on Twitter, and the overwhelming consensus is that it doesn’t look like Ariana.

Speaking of the new wax structure, the Madame Tussauds Wax Museum in Orlando unveiled its replica of the pop icon on March 9, 2022. Her wax replica contains many of Grande’s distinguishing traits, such as her tattoos and iconic ponytail.

The statue is dressed in two-piece attire with pearls and a pink puffer jacket. The realistic image is completed with diamond earrings and a copy of her engagement ring.

This is the third edition of the singer’s wax figure. And fans are divided on whether it does the star justice.

One Twitter user said, “WAYYYYY better omg, I thought this was really her.” But someone other jumped in, saying, “They always mess her up.”

Then some just didn’t know how to react to the figure.

“I don’t know how to feel about this, it’s kinda good, but it’s also bad at the same time,” one torn Twitter user commented.